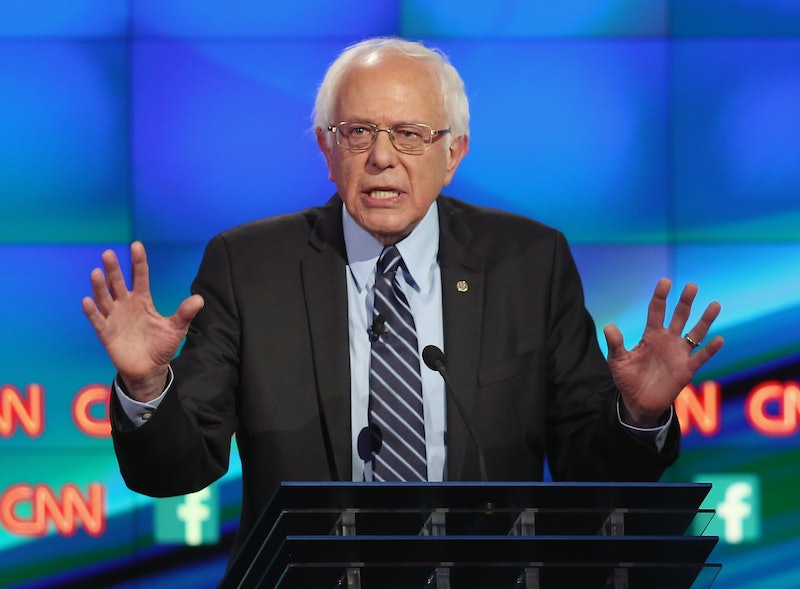 Bernie Sanders showed up to Tuesday night's Democratic primary debate ready to do serious battle. With both the Vermont senator's poll numbers and his overall popularity rising, it's not surprising either. Throughout the first 15 minutes of the Democratic showdown, Sanders soared, tackling each of moderator Anderson Cooper's questions with the sort of ease you'd expect from someone who's been campaigning for the presidency their entire life — and if the hilarious Bernie Sanders debate memes floating around on social media were any indication, Sanders has cemented himself as a serious contender long before the close of Tuesday's political festivities.

"Bernie Sanders gets this format better than the others," tweeted Vox Editor in Chief Ezra Klein of Sanders' performance, pointing to his early break, however aggressive, as a sign of his strong debating skills. "He isn't introducing himself, he's introducing his argument."

Sanders, of course, has proved himself to be both hugely polarizing as well as massively popular with a certain subcategory of left-wing voters. For the most part, Sanders' base is made up of young, progressive, millennial voters who aren't exactly frightened by Sanders' own admission on NBC's Meet the Press this past Sunday that he's a self-described "Democratic Socialist." In fact, some have grown to embrace the term wholeheartedly, with many of them reminding Sanders critics that the majority of liberal voters in any western country tend to subscribe to the same beliefs, even if they won't officially take on the official title themselves.

With all that in mind, it makes sense that there would be more than a few killer "Feel The Bern" memes making their way around Twitter, Facebook, and Tumblr (because if there's one thing on which millennials can absolutely claim to be experts, it's memes). Here are a few of the best from Tuesday's epic Democratic showdown.

Early in the evening, The Daily Show got in on the action, tweeting a truly magical photoshopped image of the Vermont Senator flying high:

And a look at the similarities between Sanders and Larry David provided this gem:

Some made obvious quips about Sanders' notoriously messy 'do and appearance (did you really expect anything else?):

Some were just plain hilarious:

At least a few Twitter users were having a good laugh over Sanders' and Clinton's interactions throughout the debate:

The evening was, of course, rounded out by a handful of strangely hilarious, absolutely random posts: