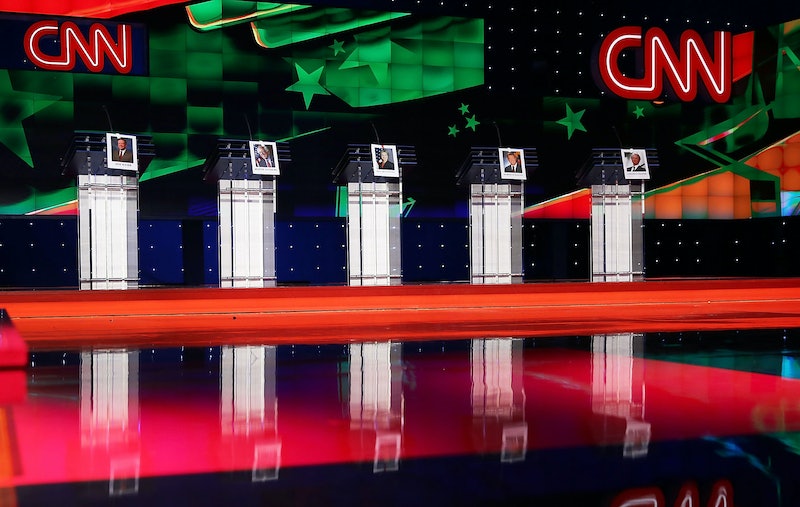 No candidate is perfect. Sure, some are better than others — Carly Fiorina has been infinitely more deft on the campaign trail than Jeb "Gaffe Machine" Bush, for example — but in a presidential campaign, every candidate will inevitably have a trouble area or two in their record that leaves them vulnerable to attacks from their opponents. The 2016 Democratic presidential candidates all have weaknesses, and one of the most illuminating parts of next week's primary debate will be seeing, for the first time, how each deals with them.

Primary debates are a unique beast: Unlike in a general election, the candidates at Tuesday's forum will be competing with each other solely for the support of voters who, by and large, already agree with everyone on stage on most of the issues. And this is where the minute differences and nuances between the candidates' records come in to play. Everyone will be eager to point out why everyone else in the debate isn't the best candidate for the job — and likewise, each will have to be prepared to respond to those allegations.

No one will be able to coast through the debate effortlessly. Here are the pitfalls each Democrat has to be wary of heading into Tuesday's debate.

As the frontrunner in the polls, Hillary Clinton has the most to lose at next week's debate. The issue on which she's the most open to attack is economics. Simply put, it will be very easy for the other candidates to brand Clinton as a lackey for the richest 1 percent of Americans.

She's notoriously chummy with Wall Street, for one; Politico reported last year that "the big bankers love Clinton" and are very eager to see her in the White House. There's the fact that her top donors are mostly ultra-rich banks. And there's her recently-released economic reform plan, which is somewhat modest and has liberal reformers skeptical.

Considering that her main opposition is economic leftist Bernie Sanders, Clinton will have to prove that she'll serve the interests of Main Street, not just Wall Street.

While Sanders' aggressively liberal economic positions make him immune to charges of plutocracy, economics is essentially his only campaign issue. As such, he's wide open to attacks that he doesn't know — or worse, doesn't care — about other issues facing the country.

We've seen this already in Sanders' difficulty gaining the support of Black Lives Matter activists, which may well get a mention at the debate. But there's also his foreign policy views, or rather, his lack thereof. How would the socialist senator from Vermont approach the Syrian civil war? What's his plan for dealing with ISIS? How does he feel about Russian troops in eastern Ukraine?

It's not a good sign when a candidate has to apologize for his lack of foreign policy to a major newspaper, as Sanders recently did. If Sanders hasn't boned up on non-economic issues ahead, he faces the risk of serious embarrassment at next week's debate.

Former Maryland Gov. Martin O'Malley is the most prominent of the non-Clinton, non-Sanders candidates, but he's still only polling at about 2 percent. It's not surprising that he's been attacking Clinton and Sanders; after all, that's how you make a name for yourself when you're the underdog candidate.

But in a presidential race, sniping at the frontrunners can only get you so far. It's also necessary to build an affirmative case for your own candidacy, and as the polls show, O'Malley has failed to do this so far. Next week's debate is his first chance to change this. It will be his largest audience so far, and if he wants to make an impact on the crowd, he'll need to make clear that he's a liberal champion of gun control, gay marriage and marijuana reform, and not just "that guy running against Clinton and Sanders."

Jim Webb has been so sparse on the campaign trail that Mother Jones launched an investigation to determine whether the former senator from Virginia is actually running for president, as he claims. The upside of his relative invisibility is that he has little to lose going in to Tuesday's debate, since very few Democrats know who he is to begin with.

In addition to proving that he really does want to be president, Webb's biggest challenge will be his broad opposition to gun control, which has resurged as a Democratic campaign issue following the recent mass shootings in Texas and Oregon. His pro-gun record is lengthy: among other things, he's voted to allow Amtrak passengers to carry firearms in checked baggage, and co-sponsored a bill banning gun registration in Washington D.C.

Webb's record on guns is problematic in a Democratic primary, and he'd be wise to have a response ready for Tuesday's debate.

A former senator and governor from Rhode Island, Lincoln Chafee is at the bottom of the polling pack, pulling an average of 0.2 percent since he announced his candidacy in April. Like Webb and O'Malley, he faces the uphill battle of getting Democrats to simply remember who he is, but he also has a unique challenge that none of the other candidates face.

For the vast majority of his political career, Chafee was — drumroll, please — a Republican. He switched his party affiliation to Independent in 2007, then again to Democrat 2013. This isn't quite as craven as it sounds: Chafee has always been staunchly liberal, and was even to the left of some Democrats during his time in the Senate. In many ways, the oddest thing is that he was ever a Republican to begin with.

Still, in this partisan climate, many Democratic voters may simply hear "Republican" and go running for the hills. As such, Chafee will have to take every opportunity to remind the debate audience how progressive he is in hopes that eventually, his previous party affiliation will become nothing more than an asterisk.