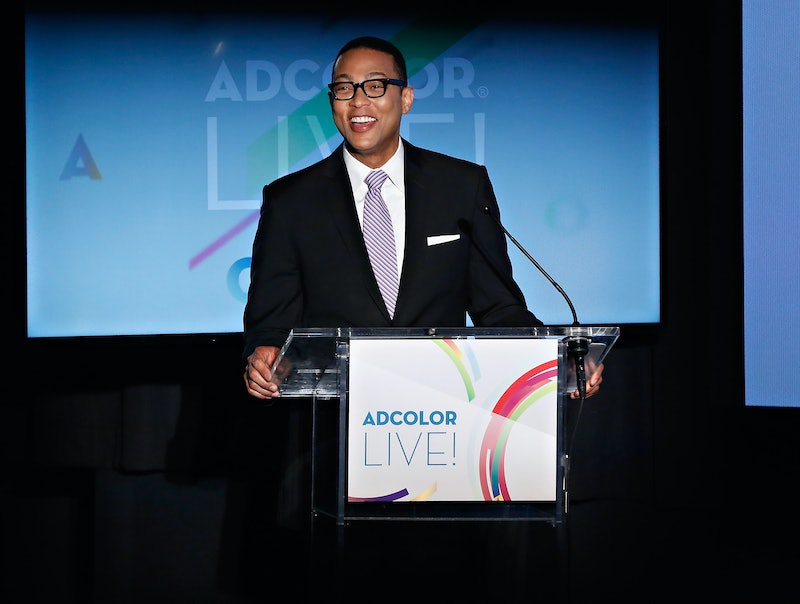 If there's one thing CNN can bet their reputation on, it's Don Lemon's willingness to argue, and Lemon's had some confrontations with Democrats during his time as a news anchor, proving that he won't take it easy on the Democratic candidates during Tuesday's debate. Lemon, along with Anderson Cooper and Dana Bash, will be hosting the first Democratic primary debate on Tuesday. You can bet it won't be a walk in the park for the candidates.

CNN hosted the most recent Republican debate, a three-hour long affair steered by Jake Tapper, where candidates were encouraged to attack each other rather than expound upon their own policies, opinions, and past statements. But Tuesday's event will be much different. Not only will there be a far smaller number of candidates on stage, but questions will be designed to grill specific candidates, rather than encourage infighting.

According to CNN, Cooper has created an excess of "pointed questions" for each candidate, and with the help of Lemon, the five Democratic candidates will likely be pressed into giving straight answers. Despite his reputation for controversy, Lemon has proven himself more than willing to press an issue — even if he's taking it way too far. But it could work out well for the debates, and his history of taking Democrats to task show that he won't be biased into taking it easy.

1. When He Asked Hillary Clinton If She Started The "Birther Theory"

During his 2008 run, the conspiracy theory that President Obama wasn't born in the United States started making the rounds. Today, the wacko theory is often associated with Donald Trump, who was a supporter of "birther" theory. But according to Trump, the idea originated from Hillary Clinton's campaign. During a September interview, Lemon was extremely blunt, asking the candidate, "Did you or your campaign start the whole 'birther' thing?" Clinton denied it entirely: "I have been blamed for nearly everything [but] that was a new one to me," Clinton said.

2. When He Grilled A Top Obama Strategist

After Obama blamed Fox News for his inability to reach the Republican base in 2014, Lemon spoke with Hilary Rosen, one of the president's chief strategists. During the interview, Lemon repeatedly questioned Rosen on whether it was right for the president to blame his problems on the media, stipulating that liberal news outlets treated Republicans in a similar manner. "The question is should the president be above that?" Lemon asked Rosen. "Isn't the president above that? Like, you don't punch down."

3. When He Sparred With Debbie Wasserman Schultz

In 2014, presidential candidate and New Jersey Gov. Chris Christie became embroiled in a scandal when members of his staff closed down traffic lanes in a New Jersey city and created wide-ranging traffic jams as retribution for the mayor not supporting Christie in his 2013 gubernatorial race. Christie, however, denied any knowledge of the scandal. During an interview with Lemon, DNC chairwoman Debbie Wasserman Schultz accused Christie of creating a culture that allowed it, and insinuated that he did have knowledge of the scandal. But Lemon pressed her, asking how Christie's denial was any different from Obama's denial of knowing anything about scandals such as the NSA spying on allies.

4. When He Made Maryland's Governor & Baltimore's Mayor Walk Out Of An Interview

Following the Baltimore riots that racked the city last year, Lemon had a heated interview with Maryland Gov. Larry Hogan and Baltimore Mayor Stephanie Rawlings-Blake. Although Hogan is a Republican, Rawlings-Blake is a Democrat and the secretary for the Democratic National Committee. During the interview, Lemon repeatedly pressed the two on why they waited so long to call in help and declare a state of emergency within the city during the protests that broke out after the death of Freddie Gray. After becoming visibly annoyed, Gov. Hogan and Mayor Rawlings-Blake removed their earpieces and ended the interview, saying they were out of time. After they left, Lemon described them as "touchy."

Although Tuesday will be Lemon's first time moderating a political debate and getting into the nitty-gritty of the 2016 election, he's proved relentless when it comes to getting his questions answered. And Cooper's hard-hitting questions, combined with Lemon's skills at wrangling interviewees, will definitely prove for an interesting debate.