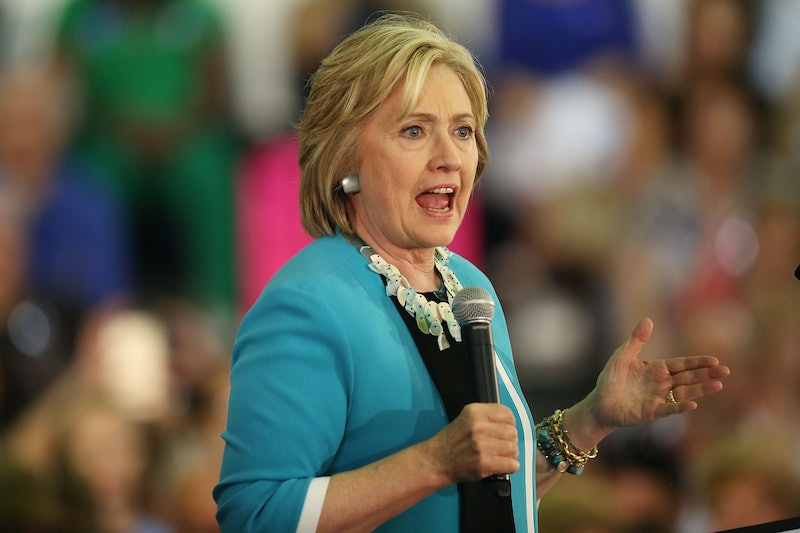 In an interview with TIME magazine published Monday, Hillary Clinton finally responded to fellow presidential candidate and Republican rival Carly Fiorina. In Clinton's critique of Fiorina's candidacy, the former secretary of state reacted to Fiorina's declarative stance against Planned Parenthood. She has criticized the Republican candidates for their attempts to limit women's access to reproductive health in the past, but this is the first time Clinton has directly addressed Fiorina individually. Clinton said the former CEO of Hewlett-Packard does not deserve votes singularly because she is a woman. However, in recent years, Clinton has waved the female flag herself in her path to become the first female president of the United States.

Journalist Jay Newton-Small of TIME asked Clinton in the interview if Fiorina has been treated differently from male peers seeking the Republican nomination for president. Clinton responded that Fiorina would have to answer the question herself, but added "people need to hold women's policies up to light and determine what their answers to problems would be before deciding to support them." In Clinton's view, a President Fiorina would be just as bad for women as her Republican male rivals.

Fiorina, meanwhile, has repeatedly made jabs at Clinton and her policies. She challenged Clinton directly in the September GOP debate at the same time she accused Planned Parenthood of clandestinely selling fetal tissue post-abortion: "I dare Hillary Clinton and Barack Obama to watch these tapes. Watch a fully formed fetus on the table. Its heart beating. Its legs kicking while someone says we have to keep it alive to harvest its brain." Fiorina's accusation against Planned Parenthood, of course, turned out to be untrue, though she has not retracted her statement.

In her interview with TIME, Clinton responded to Fiorina's debate challenge directly. "I think that her full-throated, inaccurate attack on Planned Parenthood was really ill-advised and inflammatory," Clinton said.

Clinton is in a tricky situation here. She can't explicitly argue that she deserves votes merely because she's a woman. But in the past she has promoted the historical significance of her campaign. As recently as July 2015, Clinton addressed her gender while on the campaign trail. "Clearly, I'm not asking people to vote for me simply because I'm a woman. I'm asking people to vote for me on the merits." She then added, "I think one of the merits is I am a woman. And I can bring those views and perspectives to the White House." This reads as a bit of a catch-22: don't vote for me because I am a woman, but isn't it great that I'm a woman?

Some concerning data shows her own supporters may have joined Team Clinton for the wrong reasons. A March 2014 Gallup poll asked respondents to name the biggest positive factor in Clinton's possible victory in 2016. By a large majority, having a female president was the most positive effect of a Clinton win. Her experience, competency, and intelligence lagged a full 10 percent or more behind Clinton's gender as beneficial factors of her presidency.

Clinton herself has been proclaiming the importance of electing a female president in the United States for years. In 2013, she told Barbara Walters voting in a female president "matters because we have half the population that has given so much to building this country, to making it work, and of course I want to see a woman in the White House." She was probably talking about herself, of course, and not just any woman. But in the same statement, she implied the issue of female representation in government supersedes matters of party politics. "I look at my friends and former colleagues who are now in the Senate, it was the women senators on both sides of the aisle who finally broke the fever over the government shutdown and debt limit debate. They have been working across party lines, and we need more of that," she told Walters.

I don't think Clinton wants voters to support her simply because she is a woman. These statements might be a bit complex in light of her recent commentary on Fiorina, but they're not very troublesome. For Clinton, the TIME interview makes clear what must be said: while she is glad that another woman is in the 2016 race, neither Clinton nor Fiorina should be given any bonus points because of their gender. Her thesis might be summarized as "more women should be in government because women and their interests are underrepresented, but don't vote for a candidate simply because she is a woman." She does not think Fiorina supports women's best interests, and the damage she would do to American women as president far outweighs any good she would bring to the White House as the first female commander-in-chief.