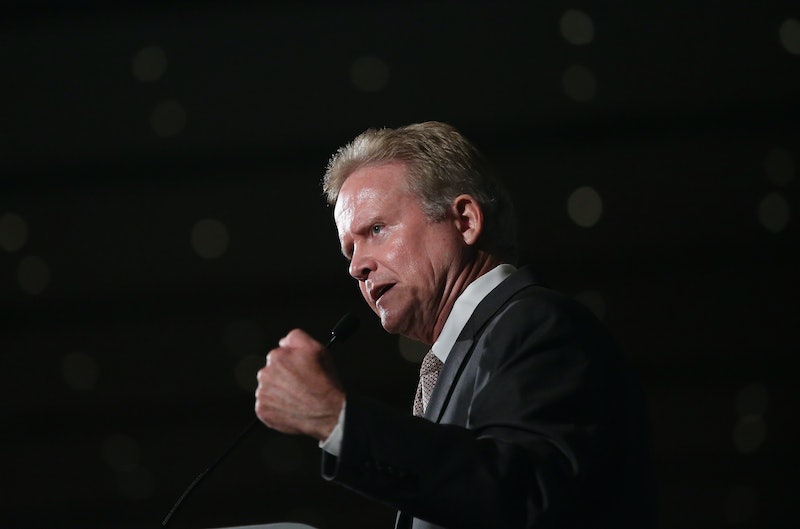 It’s official: The first Democratic presidential debate is over. One of the many things we learned tonight is that Jim Webb, a former senator from Virginia, is one of the Democratic candidates for president. Up to this point, he’d kept a pretty low profile — so low, in fact, that some journalists have had a hard time confirming that he is in fact running a campaign. And yet, Webb’s closing statement Tuesday night highlighted another problem he may have in his bid for the presidency: It's not entirely clear why, on a policy level, he is running.

Until tonight, Webb was unknown to the vast majority of voters, and that’s not just due to his lack of campaign events. He only served a single term in the U.S. Senate. Before that, his most recent stint in the government was as secretary of the Navy — during the Reagan Administration. In between, he wrote a couple of books, many newspaper articles, and even a screenplay (for the 2000 Samuel L. Jackson military drama Rules of Engagement ).

Webb is more well-known now than he was before Tuesday's debate, but the rationale for his candidacy is still something of a mystery.

Here is his closing statement:

Thank you. Ladies and gentlemen, it's been a pleasure to be with you tonight. You've heard a lot of promises up here; you've heard a lot of rhetoric. They all seem to happen during campaigns, and then once the election's over, people start from scratch again and try to get things done.

One of the things I can promise you, if you look at my record, in and out of government, is that I've always been willing to take on a complicated, sometimes unpopular issues, and work them through — the complex issues —and work them through in order to have the solution.

I know how to lead. I did it in Vietnam, I did it in the Pentagon, I did it in the Senate, and if you will help me overcome this cavalcade of -- of financial irregularities and money that is poisoning our political process, I am ready to do that for you in the White House.

That's pretty vague. What are the "complex issues" he hopes to address? What are the "other ways" in which he's found solutions to political problems? He says he wants a "national political strategy," but what would that strategy consist of? Webb didn't say. Other than criminal justice reform — a noble cause, to be sure — there's not a single reference to a specific policy in Webb's entire closing comments.

This isn't the end of the world for Webb — there are five more debates, after all — but he's going to have to get a whole lot more specific if he hopes to win the hearts of Democratic voters.