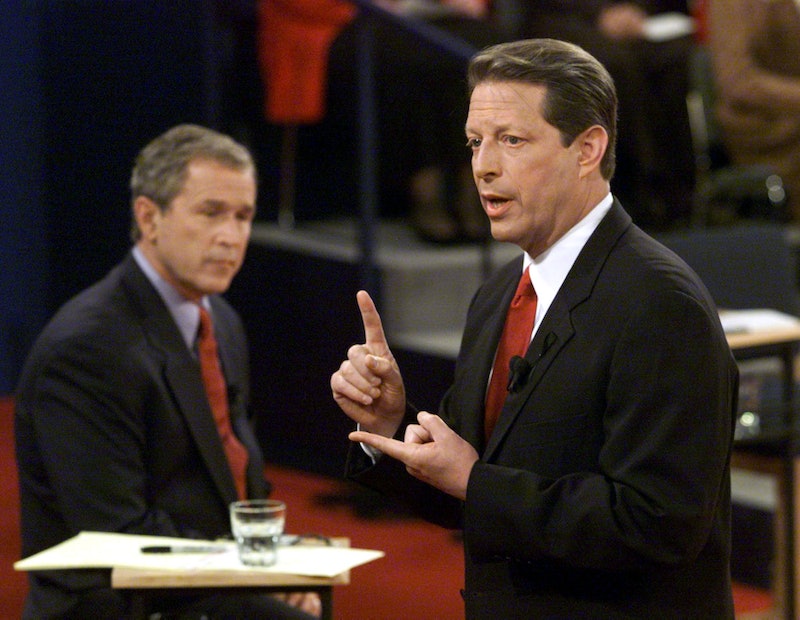 From "Ronald Raven" to awkward high-fives, there have been plenty of gaffes and laughs to come out of the two GOP debates that have taken place so far. Come Tuesday, the Democratic candidates will have their turn to appeal to American voters, but a national spotlight burns hard, and chances are someone will make a mistake. Take any of the funniest Democratic debate slip-ups from all time, and you'll see that these kinds of embarrassing events don't discriminate against either side of the aisle.

These days, if you mess up, the public will know instantly because of live TV, and with 24-hour pundit talks and YouTube, your mistake is pretty much guaranteed to live forever. Things that happened decades ago still live on online so the pressure is on to get things right and to not lose your cool.

To be honest, it looks like the Republicans give it up at a much more alarming rate — from Gerald Ford's communism oops to Rick Perry's literal "oops" — but the Dems do have a tendency to make silly blunders, too. As these Democrats in history will tell you, things can get tough on the debate stage.

In the 2000 general election, Al Gore, then already in the White House as vice president, constantly looked exasperated while a cool George W. Bush rattled off his talking points. Gore rolled his eyes, sighed loudly in the microphone, and effectively launched countless parodies of his very visible frustration. We all know how Indecision 2000 turned out.

During the 2008 primaries, Hillary Clinton was asked point blank why people didn't like her as much as they did Barack Obama. Though it tapped into a common critique of the Democrat, she was taken aback by the pointed question. She admitted that Obama was indeed very likable, to which the young Illinois senator said, "You're likable enough, Hillary." Though some thought Obama's response was condescending, in the end, it was his name on the golden Democratic ticket to the White House.

During the 1984 Democratic primaries, Walter Mondale, who previously served as vice president to Jimmy Carter, challenged Sen. Gary Hart when he suggested he had plenty of new ideas. Mondale referenced the famous Wendy's commercial, "When I hear your new ideas, I'm reminded of that ad, 'Where's the beef?'" Mondale would go on to win the Democratic Party's nomination but lose out to Ronald Reagan.

With just a week left to go before the 1980 general election, President Jimmy Carter finally agreed to debating Reagan and closed out his argument by saying he consulted with his daughter Amy. "I had a discussion with my daughter, Amy, the other day, before I came here, to ask her what the most important issue was. She said she thought nuclear weaponry — and the control of nuclear arms," he said. Many saw the remark as bewildering, considering Amy was just 13 years old at the time. Carter would go on to lose his incumbent seat.

Have you ever wondered what was the biggest concern for the world's snowmen? Well, during the 2008 primaries, CNN brought in questions from around the globe, and this inquiring snowman showed up front and center to ask about global warming. We'll pin this gaffe on whoever provided the snowman's voice. Creepy.

2000 was not good to Gore. He lost the White House after a painstakingly beleaguered recount — damn you hanging chads! — and he also probably won't ever live down this failed tactic that happened during a town hall debate. At one point, Gore stood from his stool and walked right on over to George W. Bush, who showcased that Dubya swagger with a nod in hello.