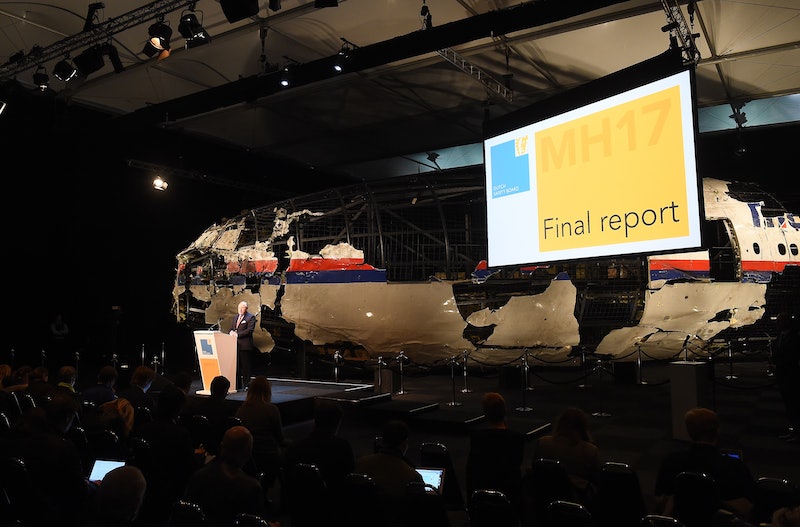 On Tuesday, a widely believed theory about Malaysia Airlines Flight 17 was finally substantiated by an official report. Dutch investigators concluded that MH17 was hit by a Russian BUK missile, which caused the plane to crash in Eastern Ukraine, killing everyone onboard. The report's findings confirm what many have speculated since MH17 was downed on July 17, 2014, despite Russia's adamant denials that it had manufactured the warhead. While the origin of the missile was the most significant component of the report, investigators examined a number of other factors that contributed to the crash and its aftermath, finally giving the family of the victims some long-awaited answers.

The MH17 report was the result of a 15-month investigation led by the Netherlands with the cooperation of numerous other countries that were involved in the incident, including Australia, Malaysia, Ukraine, the U.S., the U.K., and Belgium. The Dutch Safety Board announced the findings at a press conference Tuesday, but did not go as far as assigning blame for the catastrophic crash, which killed 283 passengers and 15 crew members.

However, Russian arms manufacturer Almaz-Antey, which makes the BUK missile named in the report, attempted to preemptively shirk the blame by holding its own conference hours ahead of the report's release. The company announced that after conducting its own test, in which a BUK missile was detonated near an aircraft, it found that the results did not match what happened with MH17.

Russia has adamantly denied its involvement in MH17's crash, objecting to accusations that it had armed pro-Russian separatists in eastern Ukraine who were believed to have shot down the plane.

Despite the contradicting reports, the Dutch Safety Board's comprehensive report sheds some much-needed light on what happened that day. Here are nine other important findings from the MH17 report.

The report concluded that the crash was caused by "impacts from a large number of high-energy objects from outside the aircraft."

The pattern of damage observed in the forward fuselage and cockpit section of the aircraft was not consistent with the damage that would be expected from any known failure mode of the aircraft, its engines or systems.

The Warhead Was Detonated Just Outside The Cockpit

Tjibbe Joustra, chairman of the Dutch Safety Board, announced at the conference on Tuesday:

Flight MH17 crashed as a result of the detonation of a warhead outside the airplane above the left-hand side of the cockpit.

The report also found that the explosion was less than three feet from the plane's fuselage, causing the "forward part" of the plane to break off.

The report detailed what immediately followed the blast:

As a result of the impact, they were exposed to extreme and many different, interacting factors: abrupt deceleration and acceleration, decompression and associated mist formation, decrease in oxygen level, extreme cold, strong airflow, the aeroplane's very rapid descent and objects flying around.

The blast from the missile killed three crew members in the cockpit immediately, the report states.

The Passengers Likely Did Not Suffer

Joustra also said that, according to the board's findings, it's likely the passengers either died immediately or lost consciousness and therefore did not suffer. The report stated:

The Dutch Safety Board did not find any indications of conscious actions performed by the occupants after the missile's detonation. It is likely that the occupants were barely able to comprehend the situation in which they found themselves.

However, the report also stated that it "cannot be ruled out that some occupants remained conscious for some time."

The Crash Lasted A Minute And A Half

According to the report, it took one and a half minutes for the plane to go down.

The Airspace Should Have Been Closed

The most critical aspect of the report was examining why Ukraine had not closed the airspace over a conflict zone, and why MH17 was allowed to fly through it in the first place. According to the report, two military planes had been shot down in the days prior to the MH17 crash. The board found that, given the tension on the ground, there was "sufficient reason for closing the airspace above the eastern part of Ukraine as a precaution," but Ukraine had failed to do so.

Many Other Flights Flew Through The Same Airspace

Besides MH17, the board found, 160 other civil flights passed through the airspace until it was closed.