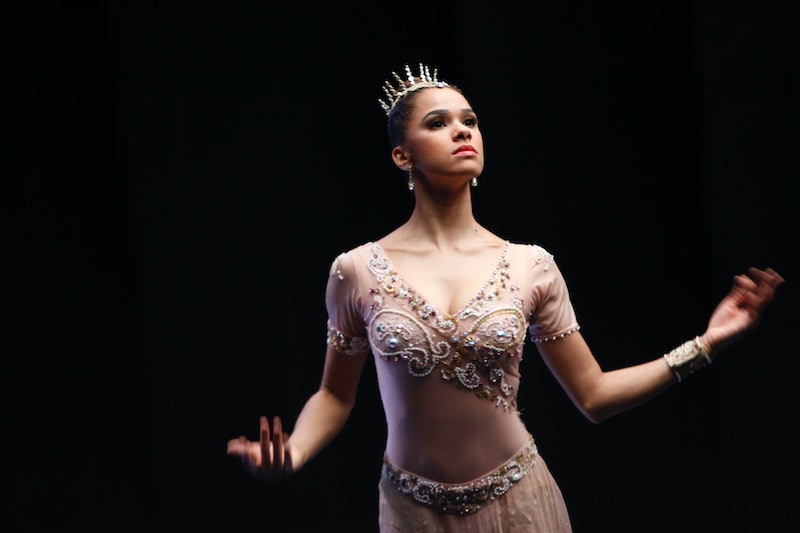 "So much [of] a part of my career and my path and my existence as a dancer is kind of pushing those people aside," ballerina Misty Copeland tells Bustle, speaking of her critics. "Going about my journey, knowing that I'd never been typical in so many ways — so why listen now?" Copeland, the subject of the new documentary A Ballerina's Tale, says she has been told nearly every step of her career that perhaps ballet just isn't right for her — because of her body type, her stature, her skin color. Yet, as charted in A Ballerina's Tale, Copeland has surmounted the obstacles, including a terrible leg injury at age 29 that nearly sidelined her career. She's sitting just across from me, accompanied by the film's director Nelson George, as we discuss filming through pain, fame and advocacy, and how she's handled her critics, of which there have been many.

"I was never really invested or concerned with what people thought of me," Copeland says. But during her recovery process from the leg injury, the seemingly-unflappable ballerina found herself a little, well, flapped, confronting "different people that would say horrible things about me on my journey back from injury."

Yet as A Ballerina's Tale shows, she didn't let the naysayers prevent her from doing what she loves. After a brief primer on Copeland's rapid ascent, the film, out now, picks up at The Firebird, when Copeland learns she has career-threatening microfractures in her lower legs. She undergoes surgery to stabilize the injury, but then begins the long road to return to the stage. The documentary combines original footage behind-the-scenes and on stage with testimonials from experts on the industry and former and current ballerinas, giving a blow-by-blow account of the arduous recovery process.

Throughout, Copeland seems to wrestle with her inner critics more than the external ones — in many scenes, her expression betrays the emotional and physical pain she worked through in order to resume her role in the company. And those same voices who told her early on that her body and her skin did not fit with the traditional image of a ballerina continued to mutter in her ear all the while.

"You're in such a vulnerable position," she says. "People don't know what you're experiencing, and that this is a huge step for you, but it's still not good enough or the standard that you were holding. It was ripping me apart."

Despite Copeland's awareness of the critics, A Ballerina's Tale does not hone in on those moments. "There was a lot of negativity aimed at her," George, the director, says. "I didn't feel like I needed to give that voice."

But the film isn't just a response to Copeland's vocal critics — it's also about "legacy, and paying homage to the women who came before her," George says. Copeland is the first black principal dancer for the American Ballet Theater, previously just the second to attain the rank of soloist, but her path would not have been possible without the support and trailblazing efforts of dancers like Robyn Gardenhire, founder, artistic director, and choreographer of the City Ballet of Los Angeles, and Raven Wilkinson of the Ballet Russe de Monte Carlo, the first African American woman to dance full-time for the company.

Yet in her company, Copeland emphasizes, she's just another dancer, and the film underscores that her aspirations parallel those of any other performer in the industry: the return from injury, the ambition to land a principal role, the desire to dance Odette/Odile in Swan Lake. Yet there's no denying that Copeland's story is significant. Says George, "The issues about race and issues about breaking that glass ceiling are extraordinary."

And not just in dance. Copeland is a ballerina first and foremost, but she has the kind of crossover appeal that packs auditoriums and brings spectators who might not have an intrinsic interest in the art. They're there for her. As I waited for the dancer before our interview, I overheard hushed conversations about how she gets people in the door; about how screenings for A Ballerina's Tale had already begun to sell out; and about her magnetic charm. This widespread appeal has landed her endorsements and brand campaigns with Under Armour and Diet Dr. Pepper, placed her in a music video for Prince and on Stephen Colbert's new show alongside Yo Yo Ma, and made her a valuable activist for accessible birth control and, recently, the #62milliongirls campaign.

Despite all this, "I feel like a normal girl," Copeland says. (She and I might have fundamentally different opinions of "normal," I think.) Like many of us, she's guilty of Googling herself on occasion, obsessing over style (when we meet, she's wearing a sublime black backless jumpsuit with a striped crop top and stilettos) and having the occasional off day (a scene that didn't make the film was of Copeland's Don Quixote performance, one that, according to The New Yorker, she wasn't particularly pleased with).

But of course, she isn't "normal," not in many ways; although A Ballerina's Tale closes before Copeland is announced as ABT's newest principal dancer, it lands instead on her role as Odette/Odile in Swan Lake, the coveted Black Swan role that is perhaps ballet's most iconic. In that, as in everywhere, Copeland is seen pushing boundaries and making waves. As George says, she is "extraordinary," but really, that just skims the surface.