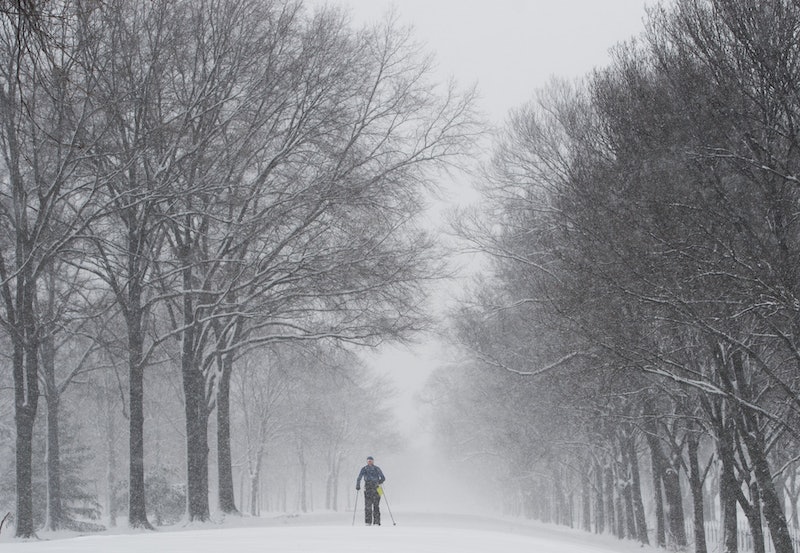 The leaves have barely begun to change, but The Weather Channel released its winter storm names for the 2015-2016 season Tuesday. It might seem like the meteorologists are trying to ruin our day by reminding us that several months of wintry hell are just around the corner, but their intentions are noble. It's important to be aware of the potential hazard of these impending blizzards, but there's another reason you should pay extra attention to these names this year — you might actually look forward to winter. Why? Because winter storm Yolo is coming! That's right, "Yolo" is one of the names on the 2015-2016 list. Clearly, the Weather Channel knows the importance of living life to the fullest. So when winter storm Yolo, hereafter known as YOLO, rolls around, you better do it justice.

Since the Weather Channel began naming storms in 2012, the network has relied heavily on Greek and Roman mythology to inspire monikers. But this year, it's deviating from ancient times and trying out something more modern. It makes sense, given that the point of assigning names to storms is to help raise awareness of potential weather hazards more easily using modern platforms like social media. Mary M. Glackin, a senior vice president at the Weather Company, which owns the Weather Channel, explained in an article in September:

It is easy to create a hashtag from a tropical storm name. If we could come together as a community to address this for winter storms, we’d no doubt learn a lot that could then be applied to significant weather at the local scale ... What’s important is to lead as a community in this social media era.

And what's more hashtag-worthy than YOLO? Probably nothing. In the spirit of the motto (it stands for "you only live once," in case you're out of the loop), here are 12 ways to celebrate winter storm YOLO that would make its inventor, Drake, proud.

Don't Build A Snowman. Build YOURSELF

And build yourself as high as you can, so that the whole neighborhood can marvel at you.

Your two favorite loves in one activity. What is there to explain?

Spend The Entire Winter In Your Bathtub

This might cost you your job, but just remember how many times you get to live.

Tell Your Crush The Truth

There's no better time to invite them over and get "accidentally" snowed in together than during winter storm YOLO.

Tell Your Family The Truth

Tell them about your secret tattoo, your secret motorcycle, and that you're 98 percent going to quit your job to become a scuba instructor in Thailand. Speaking of ...

Go on that backpacking trip you've always wanted to go on. There's no better time than in the dead of winter.

This blizzard has nothing on you. Strap on a pair of snowshoes and walk around your city. If you live in a big city like New York, you'll appreciate the rare empty streets.

Invite your friends over and have a feast.

Or better yet, put on Netflix and have a solo feast — you can call it a YOLO feast.

Upgrade that Frodo life. It's time to be your own Aragorn.

Just Say No To Winter Sports

It's OK to go on a snowboarding trip with your friends only to sit in the warm lodge all day long. Who wants to risk breaking bones when you have hot cocoa, a fireplace, and a Bing Crosby cover band to keep you company?