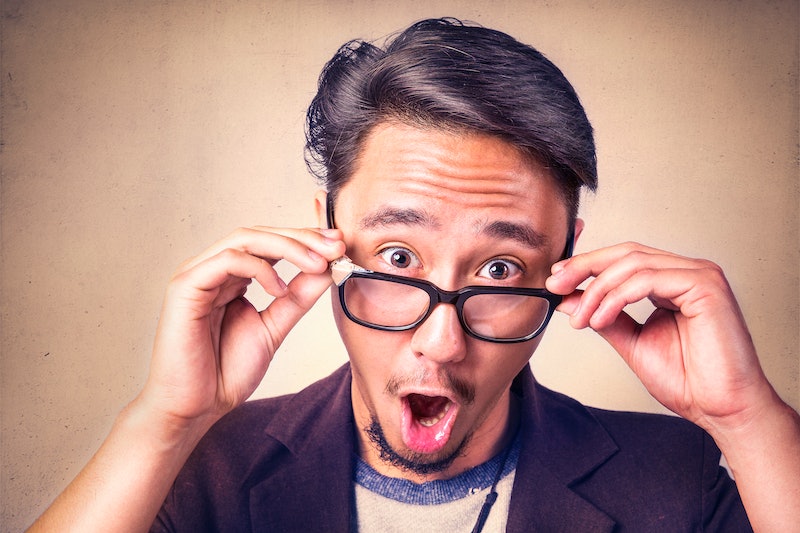 If you're a firstborn, then you know it can come with its fair share of pressures — like your parents putting way more pressure on you to study than they seemed to with your younger siblings. New research from JAMA Ophthalmology suggests that not only is that true, but all that extra helicoptering may have had a surprising side effect: it may have harmed your eyesight. According to researchers at Cardiff University in Wales, firstborn children often become nearsighted, and it may have a lot to do with the pressures placed on them by their parents. (So thanks a lot, Mom and Dad!)

For the study, researchers looked at nearly 90,000 adult participants who had eye exams and found that firstborns were 10 percent more likely to be nearsighted than younger siblings. That then led the researchers to theorize "reduced parental investment in education of children with later birth order may be partly responsible" for the discrepancy. That aligns with another recent study that found skyrocketing rates of nearsightedness (myopia) among Chinese youth — which the lead researcher linked to the pressure parents put on all of their children to pass the country's intense college entry exams.

If you're the firstborn in your family, don't let this news bum you out too much. There are still plenty of other proven advantages to being to being the oldest. (Besides getting to boss younger siblings around.)

Firstborn Girls Are Basically Primed To Rule The World

If you've heard that one about firstborn girls being overachievers, there's actually something to it. In fact, it's backed by science. According to a 2014 study, firstborns are more likely to seek higher education. But it's the girls who really excel: When it comes to ambition, they ranked 13 percent higher than firstborn boys. "There are several possible explanations for the higher attainment and ambition of the eldest," said lead researcher Feifei Bu of the University of Essex’s Institute for Social and Economic Research. "It could be that the parents simply devote more time and energy to them — it could be they are actually more intelligent."

Firstborns Are More Likely To Stay On The Straight And Narrow

Maybe it's because you were always charged with keeping younger sibs in line and setting a good example, but studies have found that oldest kids are much less likely to abuse drugs, have a teenage pregnancy, or engage in criminal behavior. Frank Sulloway, author of Born To Rebel, explained, "Younger siblings are more inclined to try these experimental, sometimes dangerous things."

Firstborns Have Slightly Higher I.Q.s Than Their Younger Siblings

This one may just be for bragging rights, but a recent study of 400,000 high school students found that firstborn kids have higher IQs. In fact, they register one point higher on the I.Q. index than younger siblings. (An older study turned up a slightly more generous three-point I.Q. advantage for firstborns.) How come? It's not known for sure, but some psychologists theorize this is because older siblings reinforce their own learning by tutoring the younger kids of the family.

So what do you think? Maybe some of these pluses to being born first in line kinda cancel out the whole nearsightedness thing? In the grand scheme of things, you might not have it so bad after all.

More like this
This Psychological Effect Might Be Keeping You From Hitting Your Goals
By Lexi Inks
Chelsea Clinton On The Best Advice She Ever Got From Her Mom
By Brianna Kovan
10 Ways To Be More Empathetic To Your Partner
By Raven Ishak and Lexi Inks
Are Quality Time & Gift-Receiving Love Languages Compatible?
By Lexi Inks
Get Even More From Bustle — Sign Up For The Newsletter