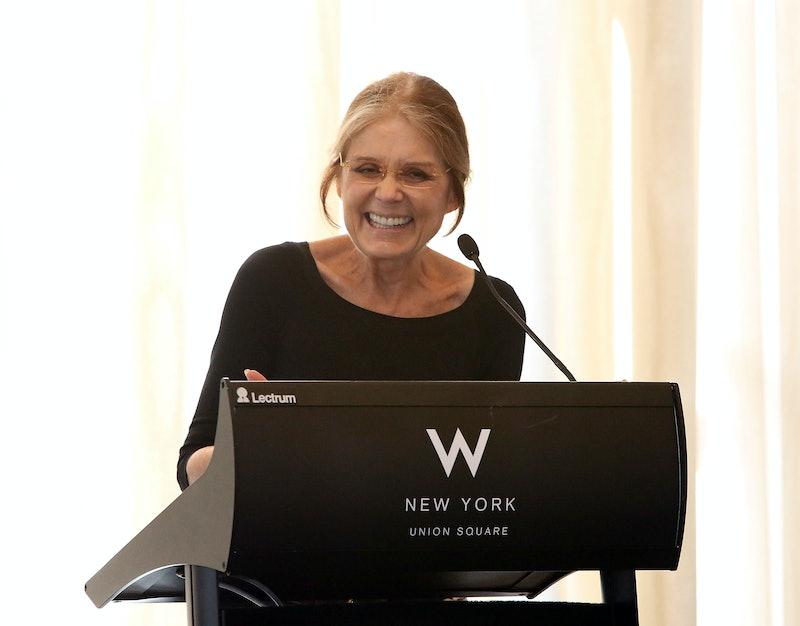 On Tuesday, Playboy announced that it will no longer include all-nude photos of women. Sales of Playboy's print magazine have decreased in recent years, and executives at Playboy determined that the once shocking all-nude photos can no longer hold a candle to the all-pervasive porn available for free online. When Playboy was first published in 1953, with Marilyn Monroe donning the cover, nobody could have predicted the success of the magazine's empire, which of course grew to include many Playmates and Playboy Bunnies. When Playboy clubs opened up, the position of the Bunny was considered to be a desirable position for a young beautiful woman, and so young ladies came from all over to interview to be a Bunny. One of these women was Gloria Steinem, who was writing an exposé on Playboy for Show magazine in 1963.

In her two-part exposé, "A Bunny's Tale," Steinem went undercover as a woman named Marie Ochs, and applied for and was given a job as a Playboy Bunny in New York City. The hiring ad for Bunnies had listed an expected salary of $200-300 per week, and was supposed to be a great job for a "pretty and personable" young woman. After applying, interviewing, and receiving the gig, Steinem had to get fitted for her costume (where she was informed all Bunnies stuff their bras), get fitted for false eyelashes, and go to Bunny School, where she learned how to take drink orders.

Steinem was undercover as Marie Ochs for nearly a month, and by the end of her time as a Bunny, she had found only one other Bunny who said she had been making around $200 per week, which was the expected pay promised in the ad. Steinem had also had her Bunny tail grabbed, experienced multiple propositions for sex, and had been "programmed," as she called it, by the Bunny Bible, which a fellow Bunny described as "glamour crap."

The glamour factor once associated with this sort of objectification of women has faded over the decades and thus so has the appeal of the Playboy style of publishing. Glamorized sexism is more or less what Playboy was all about when it first began, but according to Playboy's current distribution sales — The New York Times reported Tuesday that Playboy sales are down to a distribution of about 800,000 — there's no longer an interest in this now outdated mode of sexual expression.

The fact that porn is so popular online and is preferable to print pornography in large part because it is free and immediate speaks to Steinem's experience as a Bunny. In her expose, Steinem writes about many of the elite businessmen who were to be given special privileges, and the pricey drinks and meals customers would order, followed up by a sexual proposition to a Bunny. The exclusiveness of the Playboy Clubs and the secret, pseudo-forbidden factor the magazine once held no longer hold appeal to the masses. In the world of nude images today, availability and immediacy seem to be more important than anything else.

The ethos of Playboy has certainly always been about overt sexuality, and about men using women to explore their fantasies. Steinem was told in her Bunny training to expect the VIP customers to ask for sex, and that generally the custom was for Bunnies to give it up to them; it was more or less a part of a Bunny's job to go to great lengths to satisfy the sexual fantasy of their male customers. But at the same time, Playboy's appeal was that it offered something taboo, something everyone wanted, but that was somehow still a little too edgy to be truly acceptable.

Gone are the days that feminists like Steinem would find anything interesting or new to say while undercover at Playboy. It would not come as a surprise to learn that women can be sexually harassed at work, are often underpaid, and must conform to extremely rigid beauty standards. And frankly, naked images of women are so pervasive that they're just not that exciting anymore. If anything, they are a means to an end used to quickly get off, not a scandalous poster to hang on a dorm room wall.

Having nothing left to expose, Playboy will now explore more covered-up frontiers, and redefine its brand as something other than cutting-edge.

More like this
The Differences Between Polyamory & Open Relationships
By Lexi Inks
The Prince William & Rose Hanbury Rumours, Explained
By Frances Stewart and Sam Ramsden
Women Around The World Are Cutting Their Hair In Solidarity With Mahsa Amini
By Darshita Goyal
Megan Rapinoe's Relaxation Hack Is Super Dreamy
By Carolyn Steber
Get Even More From Bustle — Sign Up For The Newsletter