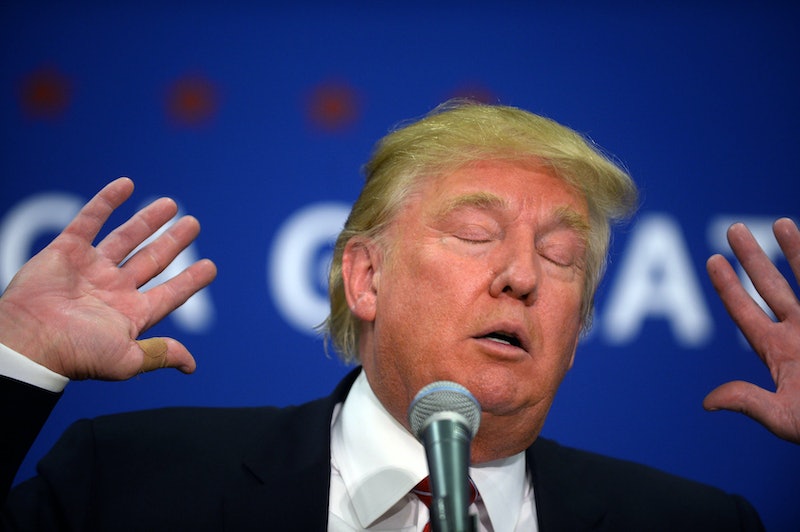 Would it be wrong to say that I'm waiting for the day where something Donald Trump says actually shocks me? Trump has yet to surprise me — in both actions and in words — and Tuesday night was truly no exception. While eyes and ears were fine-tuned to their TVs, the enigmatic presidential hopeful took to Twitter to spew his fountain of vicious shrewdness, and honestly, I expected nothing less. Tonight's roundup of the worst Donald Trump tweets from the Democratic debate revealed plenty about the international bajillionaire as a person, and even more about the type of president he'd serve his country as.

There are plenty of people in Donald Trump's corner who hail the celebrity as a no-nonsense, give-it-to-you-straight kind of guy. It's part of his appeal; people love that he's not a politician and that he's completely uninterested in playing by the rules of political correctness. He's totally unscripted, and I imagine who he is off camera is identical to who he is when the lights are flashing (which makes me cringe, but OK). I can also understand how the idea of someone like Donald Trump could be refreshing — it is, after all, the very exact reason so many people put their faith and their votes in President Obama — but then there's the very issue that it is Donald Trump who's been thrust forward for the job, and the whole understanding portion of my brain is just shot to shit.

While one woman and four dudes from the Democratic Party debated on stage, eager to convince Americans, young and old alike, that their vision for the future of Free World is the most honorable, progressive, and important, Donald Trump chewed up and spit out those very hopes and dreams. He showed, like he has time and time again, that his true colors are painted in ugly shades of hatred, judgment, callousness.

His tweets highlighted how little he will lead by example, and how infrequently he will inspire our nation to do and be better. Here are the worst ones:

Donald Had Feelings About The Pre-Show

Donald Showed Where His Loyalties Lie

Donald Didn't Hold Back When It Came To The Candidates

But the Dems on stage spoke louder than Trump's tweets ever could — and that is something to be entirely thankful for.