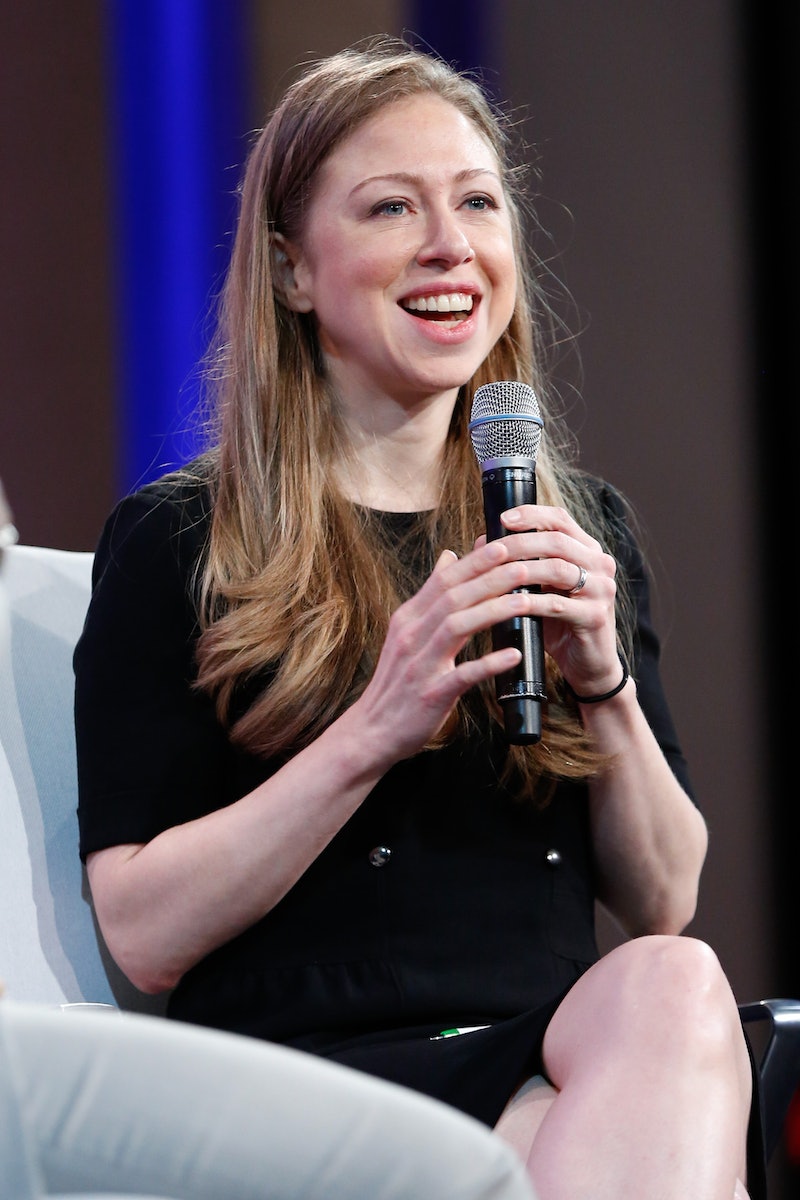 At long last, the first Democratic presidential debate is going down in Las Vegas, pitting five candidates against one another on the national stage. There are two genuine contenders so far, and three long shot bids, with Hillary Clinton and Bernie Sanders lead the pack, and Jim Webb, Martin O'Malley and Lincoln Chafee trailing distantly. And for the frontrunner, the first clash of the candidates is shaping up to be a solo mission — Chelsea Clinton didn't attend the Democratic debate on Tuesday night.

She has a pretty decent excuse, however. According to ABC News, she's currently on tour for the release of her first book, a New York Times bestseller children's title called It's Your World: Get Informed, Get Inspired & Get Going! Chelsea is in the middle of a swing through Louisiana during the Las Vegas face-off, as she mentioned on Twitter prior to the debate.

Her father, Bill, won't be at the debate either, and according to CBS News, you probably shouldn't expect that to change anytime soon. He didn't attend a single one of her debates throughout her 2008 Democratic presidential primary campaign. That's more suggestive of a personal preference than anything accidental, so it's probably a safe bet that he'll continue to stay away in the weeks and months to come.

That's not to say you shouldn't expect to see more of Chelsea throughout the campaign, to be clear. She's long been a vocal, and very effective public advocate for her mother's campaign, and for her character. In an interview with Today in September, Chelsea called her mother "my hero."

I love and admire my mom. I know that she's talking about issues that are important to families across our country. I believe that is starting to resonate. I believe as more and more Americans hear from her, they'll come to know why I'm so proud to be my mother's daughter, and even more why I'm so proud that my mother is my daughter's grandmother.

Of course, let's be honest: it's not like having an audience chock full of friends, family, or fans was going to make any kind of a difference to Hillary Clinton. It might be a nice little emotional lift for some candidates, after a long a grueling debate, but this is pretty familiar territory for her. Between winning Senate two terms in a high-profile state like New York, and mounting a just-unsuccessful presidential bid in 2008 that put her through a whopping 25 debates, according to CBS News, there's nothing that's going to impact her performance beyond what actually takes place on the stage — she reportedly underwent extensive debate preparation leading up to Tuesday night.