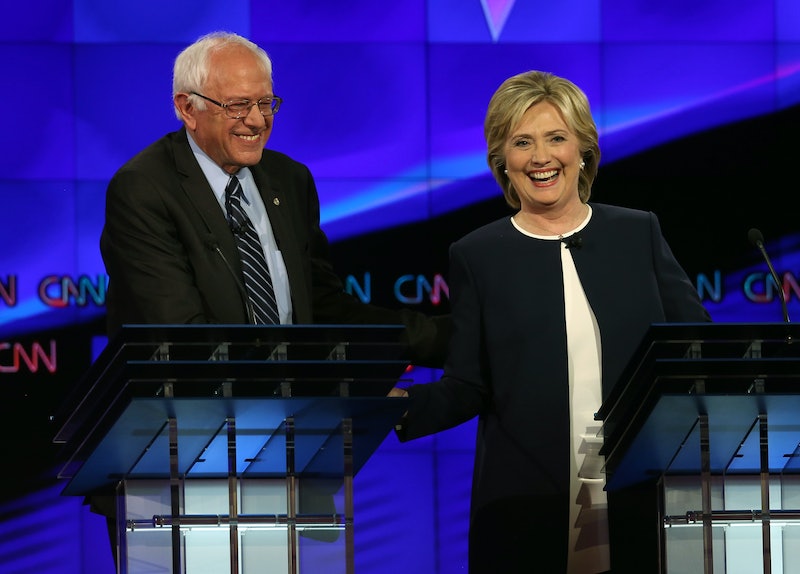 Tuesday evening's Democratic debate among 2016 presidential hopefuls was full of plenty of zingers and one-liners from each of the candidates. The debate, which took place in the Wynn Las Vegas hotel and casino in Nevada, saw arguments and policy ideas from former Secretary of State Hillary Clinton, Vermont Sen. Bernie Sanders, former Maryland Gov. Martin O'Malley, former Virginia Sen. Jim Webb, and former Rhode Island Gov. Lincoln Chafee. While each of the candidates showed passion about various issues, they weren't the only ones — Twitter users were quick to come up with some of the funniest memes about the Democratic presidential debate.

CNN's Anderson Cooper moderated the debate. While Cooper said he didn't want to pit the Democratic candidates against each other, as CNN's Jake Tapper did during last month's GOP debate among 2016 presidential hopefuls, the candidates still got in jabs against each other as well as against their Republican opponents. Clinton's, Sanders', and the other candidates' comments were ripe for online mockery, and the Internet did not disappoint. Here are some of the most hilarious memes inspired by Tuesday's Democratic debate among 2016 presidential hopefuls, because, hey, even politicians need to laugh once in a while!

Before the debate officially began, The Daily Show's official Twitter account hopped into the ring with a hilarious meme about Hillary Clinton.

Other Twitter users were already preparing for post-debate memes about the candidates' lackluster performance.

One person resorted to insulting Clinton's debate outfit, comparing her look with that of Kim Jong Un, while others remained unfazed by Clinton's unchanging demeanor.

Clinton wasn't the only candidate under scrutiny, though. Twitter users were quick to mock Lincoln Chafee after he called himself a "block of granite" at the debate.

Other Twitter users were too busy focusing on Anderson Cooper's glasses.

And of course we couldn't go without a well-placed socialism joke.