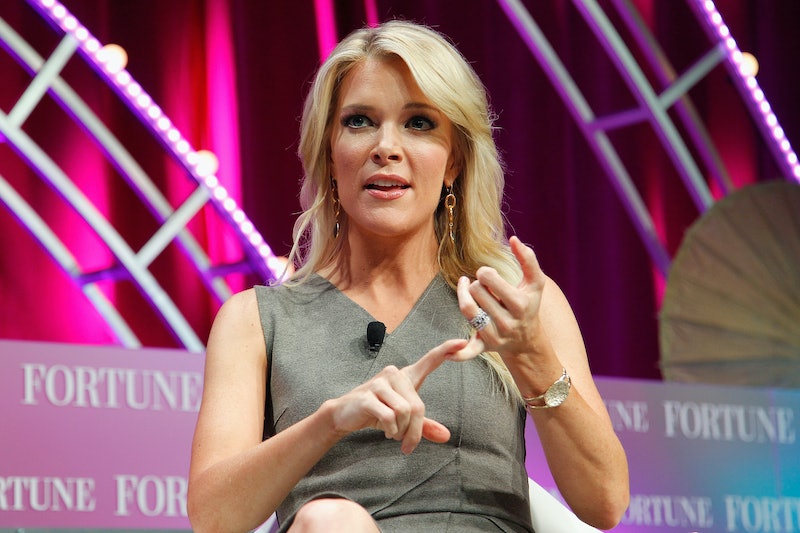 Well, there you go! The first Democratic presidential debate is finally in the books, and it'll be up to the media and viewers at home to parse what exactly we all saw. So many things go into judging the winners and losers in these debates, for better and for worse — beyond just factual honesty about the issues, candidates also get judged on their body language, their tone, their on-stage presence. And there are countless people who're offering their takes: Megyn Kelly's comments on Hillary Clinton's Democratic Debate performance give a pretty clear idea of where she's at.

Kelly's is, without a doubt, the biggest thing going over at Fox News right now — she moderated the channel's first GOP primary debate alongside Chris Wallace and Bret Baier back on Aug. 6, and took home the third quarter cable news ratings crown within the so-called "key demo" of viewers aged 25 through 54. That's no small feat, either — she snatched the top spot away from Fox News colleague and serial ratings braggart Bill O'Reilly, who had been on a ten-year undefeated run. In other words, she's vying to be the biggest name in the whole place.

She was again tasked with helming the channel's post-debate coverage Tuesday night, on a special edition of The Kelly File, which could turn out to be very good news for her — the boost from her post-debate episode was basically what put her over the top against O'Reilly in the ratings battle.

Undoubtedly the single opinion remark from Kelly's post-debate coverage that generated the most attention is the one she referenced in the above tweet, claiming that Clinton couldn't claim to be a political "outsider" by virtue of her gender. It was a response to a question CNN's Anderson Cooper asked Clinton, about how she'd compete in what appeared to be the "year of the outsider" in politics. Clinton responded, "Well, I can't think of anything more of an outsider than electing the first woman president, but I'm not just running because I would be the first woman president," as detailed in The Washington Post's debate transcript. Kelly was not too impressed with the answer, suffice to say.

There are some problems on both sides of this — Clinton claiming to be a political outsider in any context is clearly a rhetorical sleight-of-hand that doesn't stack up to her career in Washington, nor her countless connections within politics, or her acumen on the corporate fundraising side of things, which was precisely the distinction Cooper was asking in comparing her example to that of Bernie Sanders'.

Kelly's response missed a crucial point, however. The fact is that Clinton is running for a job that requires widespread national approval to win, a hell of a lot more support than Kelly needs viewers to keep her show on the rails — we're talking tens of millions of Americans, as opposed to the 2.5 million or so viewers she gets each day, which represents less than one percent of the American population. A gender barrier for the most powerful job in the country (and indeed, the world) simply isn't the same as gender barriers in media, because:

In short, whether or not Clinton can credibly personally claim she's an outsider, hundreds of years of American political history have made it clear that women are collectively treated as such. Kelly and her guests, Howie Kurtz and Chris Stirewalt, also teased Clinton for an unscripted moment last night when Cooper joked about being glad all the candidates made it back from the commercial break on time, Clinton in particular, to which she responded that "it does take me a little longer, that's all I can say." The implicit meaning was pretty clear — Clinton must've been a little longer getting back from the bathroom break than her male counterparts, and it was frankly kind of needless and tacky for Cooper to bring it up.

But Kelly and Stirewalt had a little back-and-forth about it all the same, and it was more than a little odd — Stirewalt in particular claimed Clinton "even got gender into going to the bathroom," which is a pretty gauche criticism considering Cooper's leading comments kind of forced her into some sort of response.