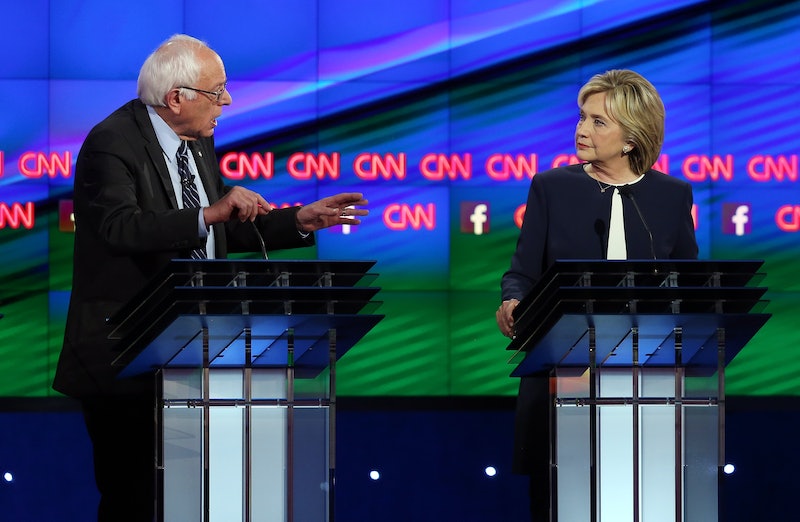 The five Democratic presidential candidates finally got to talk policy Tuesday night, during CNN's first primary debate. During the debate, the candidates talked about income inequality and paid family leave, but they seemed to avoid talking about women's issues entirely. This fact was one of the many infuriating aspects of the Democratic debate.

Vermont Sen. Bernie Sanders talked up his focus on income inequality and improving healthcare for veterans in order to make himself appear more electable and less socialist — because according to NBC News, a socialist candidate is more unpopular than a Muslim or an atheist. Sanders and Clinton finally got to meet each other head on after months of not engaging at all — a strategy that's much different than what's happening amidst the Republican field. Though the candidates engaged about important issues, such as the Black Lives Matter movement, they totally ignored abortion rights and equal pay, both of which have dominated media coverage for the past few months. Sure, the debate couldn't be three or four hours long (Hint, hint, Republicans!), but the candidates could have made some effort to address these issues and spend less time on annoying questions like "Are you socialist?" Ignoring certain issues and focusing too much on others — like Clinton's emails — was just one of the six infuriating moments from the first Democratic debate.

1. Focusing Too Much On Socialism

As soon as the debate started, CNN moderator Anderson Cooper dove right to the biggest issues each Democratic candidate was facing. Cooper's first question to Sanders was "You call yourself a democratic socialist. How can any kind of socialist win a general election in the United States?" When Sanders tried to explain what a democratic socialist is, Cooper didn't relent. He said, "The Republican attack ad against you in a general election — it writes itself. You supported the Sandinistas in Nicaragua. You honeymooned in the Soviet Union. And just this weekend, you said you're not a capitalist."

Sanders fired back, "Do I consider myself part of the casino capitalist process by which so few have so much and so many have so little, by which Wall Street's greed and recklessness wrecked this economy? No, I don't. I believe in a society where all people do well. Not just a handful of billionaires."

Why is it such a radical idea that capitalism is not perfect? Honestly, it's not that radical. No one said that using certain concepts from another economic theory means the U.S. is suddenly going to lock people in prison without reason, censor the press, and kill small business entirely.

2. When Candidates Would Answer An Old Question At The Start Of A New One

Both former Virginia Sen. Jim Webb and former Rhode Island Gov. Lincoln Chafee were guilty of this strange tactic. Often throughout the debate, Cooper would ask a question, and not every candidate would get a chance to answer it or respond to something another candidate had said, even if they felt passionately about that question. This was the result of the debate rules, not Cooper favoring one candidate over another.

Later, when Cooper would direct a question to Webb or Chafee, they would say something like, "Well, really quick, I want to respond to what someone said about ..." before answering the new question Cooper had just asked. It was extremely confusing and super annoying. Stick to the questions you're being asked!

3. Cooper And The Candidates Attacking Clinton's Support Of Going Into Iraq

Yes, it was a terrible decision, and the government should not have told people that it had evidence of weapons of mass destruction in Iraq. No one likes to hear that the government exaggerated something so that it could invade a country, especially when we have strong evidence that U.S. involvement in Iraq was one factor that contributed to the 2008 recession. Many Republicans supported going in, many Democrats supported going in, and judgment was clouded by one of the greatest tragedies and acts of terror that the U.S. had ever experienced. It's just old news, and if the candidates or Cooper wanted to attack Clinton for being a warmonger, they should've used other instances where she favored an interventionist policy.

An hour and 20 minutes into the debate, Cooper was still asking Clinton about her emails, when Sanders turned to Clinton and shut down the talk in the most perfect way:

The American people are sick and tired of hearing about your damn emails. The middle class in this country is collapsing. We have 27 million people living in poverty. We have massive wealth and income inequality. Our trade policies have cost us millions of decent jobs. The American people want to know whether we’re going to have a democracy or an oligarchy as a result of Citizens United. Enough of the emails. Let’s talk about the issues facing America.

Clinton replied with a simple, "Thank you, Bernie. Thank you." And then the two shook hands adorably.

Webb didn't believe that he was getting enough talking time during the debate, so instead of answering his questions with vigor in order to attract attention to himself, he just complained to Cooper about the rules. He sounded like a disgruntled Ron Swanson without breakfast, and it got old really fast.

At one point, this exchange happened:

Cooper: You're over your time as of now.

Cooper: You agreed to these debate rules.

And people on Twitter were tired of it, too.

6. There Was Little To No Discussion Of Women's Rights

Clinton opened the debate with strong statements about paid leave and "equal pay for equal work" in an expected nod to her economic plan, which features ideas to help close the gender pay gap and empower women. But that was one of the last times women were mentioned during the debate. There was significant talk about paid family leave later on from all of the candidates, but there was only one line in which abortion rights were mentioned, and no other chatter at all about equal pay or gender inequality.

Given the Republican move to defund Planned Parenthood and Republican candidates staunch disapproval of equal pay laws or an increased minimum wage, watching the Democrats left women wondering "Where are our champions?" It's disheartening that the issues that mean the most to women seemed to mean little to the candidates in the first Democratic debate.