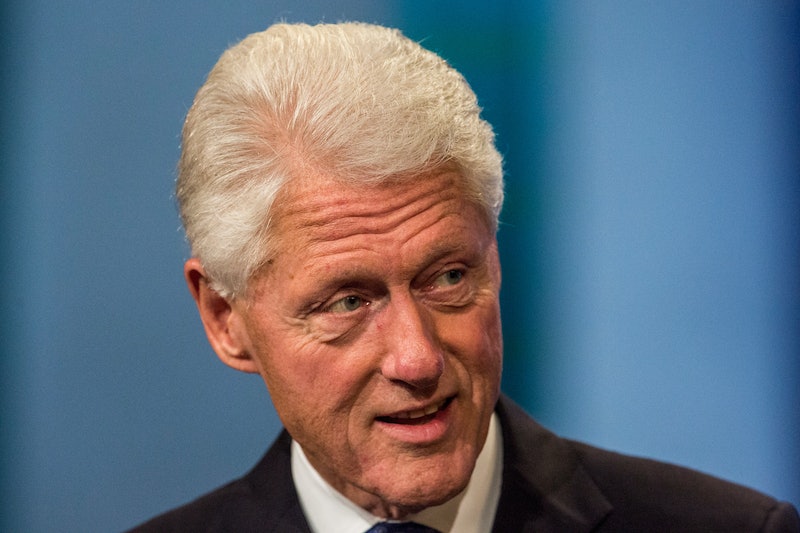 Bill Clinton has been less involved in his wife's presidential campaign this time around, compared to his numerous campaign appearances in the 2008 race. As the first Democratic debate of the 2016 primary season approached, many people wondered whether or not he would attend the event, and his arrival in Las Vegas with Hillary on Monday made the chances seem high. However, Bill Clinton will not be at the Democratic debate Tuesday night, opting to watch the live event on TV, according to CBS.

Hillary's campaign chairman, John Podesta, told CNN ahead of time that the 42nd president planned to watch the debate remotely, and he obviously didn't change his mind. "It's her night," Podesta told CNN's Wolf Blitzer. "He's happy to experience this debate the same way that millions of Democrats around the country will — and I'm sure he's confident that she's going to do great." According to CBS News, Bill didn't attend any of the 25 Democratic debates Hillary participated in leading up to the 2008 election, so it's not surprising that he decided to sit this one out, too. Surely the couple will debrief about her strong moments (and her not-so-strong moments) on Wednesday. After all, which candidate's spouse has more debate experience than Hillary's?

Some think Bill's involvement in Hillary's 2008 campaign hurt her chances, so his staying out of the spotlight might benefit her. In 2008, Jimmy Carter told The Washington Times, "As [Bill] tried to campaign for his wife, I think in the heat of the campaign he made some verbal mistakes. I made plenty of them when I was running for president, too, so I don't blame him for it. But I think in some of his remarks, he has hurt his wife's candidacy." Carter clarified that he didn't think Bill's "mistakes" were intentional, but nonetheless, he thought his participation in the campaign had a negative effect.

Bill's reasons for staying in to watch the debate on TV could have been totally innocent — maybe he didn't want to take any attention away from his wife, maybe he didn't feel like taking endless selfies with countless fans, or maybe he just didn't want to put pants on. Whatever his reasoning, I'm picturing Bill curled up in bed, holding a glass of red wine, and screaming at the TV any time someone insults or criticizes his wife.

It is worth noting though, that Bernie Sanders' wife, Jane Sanders, watched the event from the debate hall in the Wynn Las Vegas hotel.