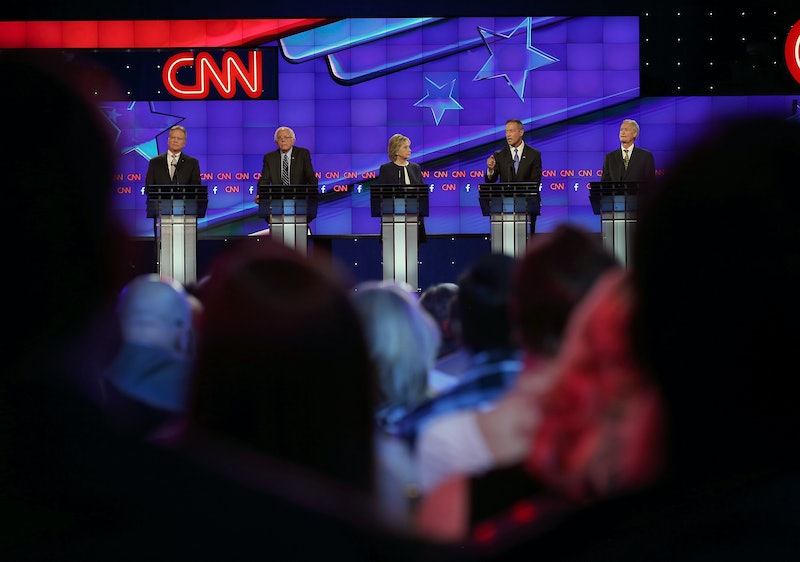 Although the night was free of yelling, infighting, and name-calling, there were still plenty of things the first Democratic presidential candidates got wrong during Tuesday night's CNN debate. Although it was guaranteed to be a lot more low-key than the first two Republican debates, that doesn't mean the entire evening was error-free. Politicians are politicians, and there were some definite missteps as Hillary Clinton, Bernie Sanders, Martin O'Malley, Jim Webb, and Lincoln Chafee took the stage.

And unfortunately for the Democrats, their mess-ups were a lot more noticeable than some of those of their Republican counterparts. With such a large field, if a Republican candidate said something questionable at the start of the night, it was mostly forgotten by the end — especially since the second Republican debate seemed to last for an eternity. But since there were drastically fewer politicians onstage in Las Vegas Tuesday, that only increased the odds that a candidates' mistake would be noticed.

And with longer time to speak, there was also the increased danger of candidates talking themselves into a hole in order to fill up their time. Between incorrect facts, misconstrued rhetoric, or awkward missteps, there were more than a few things that they got wrong.

Every Country On Earth Has Paid Maternity Leave

Bernie Sanders got pretty fired up while talking about the need for paid maternity leave in America, but took it a bit too far when he stated that "every country on Earth" has paid maternity and parental leave. Unfortunately, that's not true — we're one of the only industrialized countries that don't mandate paid leave, but we aren't the only one, period. He later clarified that America was the only "major country," but the mistake still occurred early in the debate, and hit a wrong chord.

Yes, it's been established that all lives matter, but we don't need to be constantly reminded of that fact — especially when talking about the increasing deaths of black Americans. Jim Webb took a wrong turn when he missed the point of the question "Do black lives matter, or do all lives matter?" Instead of validating the BLM movement and discussing racial equality, Webb chose to answer that "All lives matter" and explain why he's had a great relationship with African-Americans. His answer fell flat, especially compared to those of the other candidates.

During the debate, O'Malley said, "Arrests had fallen to a 38-year low prior to Freddie Gray’s tragic death … Arrests peaked in 2003” — insinuating that crime decreased during his time as mayor of Baltimore, from 1999 to 2007. But according to Politico, crime actually rose during his tenure, and hit its peak in 2005, when approximately one-sixth of the city's residents were arrested.

You Can't Fly Into Tripoli, Libya

According to Webb, “Try to get to Tripoli airport today. Can’t do it.” Webb was referring to the largest city in Libya. But despite security concerns, it is in fact open for airfare. According to Politico, even Americans can fly in and out of the main airport currently. It's an easy mistake to make, but an embarrassing one to make while trying to tout your foreign policy chops.

There Are 27 Million Americans Living In Poverty

Sanders dropped this number while explaining that there are plenty of more important things to talk about than Clinton's email scandal. But in his annoyance at being asked to comment on a topic he finds stupid, he actually lowballed America's poor. According to the federal census, there are actually 46.7 million people living in poverty. Which proves Sanders' point even more.

While Clinton had a very strong showing throughout the night, there was one major missed opportunity: climate change. Sanders included it as a main issue during his opening lines, while O'Malley included it in his closing statement. Both highlighted their own approaches to how they would help pursue alternative energy plans. But instead of discussing her proposed policy, Clinton spent the night talking about how she and Obama "literally went hunting for the Chinese" in order to talk to them about energy initiatives. Which, despite providing for a hysterical out-of-context line, didn't at all give voters a clear sense of what she would actually do.

When the candidates were ask to name which political enemy they were most proud of making, there were some great answers thrown out. O'Malley named the NRA, while Sanders decided he was proud of making enemies with Wall Street. But Webb decided to just casually talk about how he killed a man. "I would have to say the enemy soldier that threw the grenade that wounded me but he's not around right now to talk to," Webb said with a smile. A collective shiver went down spines around the nation. It was a weird, uncomfortable moment, but I guess Webb gets points for providing the biggest surprise of the night.

To give the candidates' credit, there weren't many big mistakes. Each thoroughly knew their points, and the mistakes made were not overly egregious. For an in-depth, two-hour debate, it could have been a lot worse.