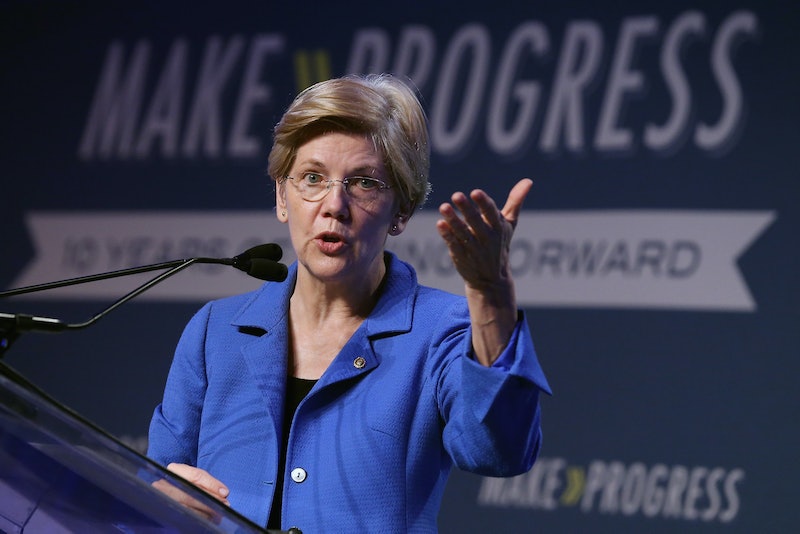 Massachusetts Sen. Elizabeth Warren definitely isn't running for president, no matter how many thousands of people you get to sign a petition asking her to run. However, her ideas have bled into the 2016 election. Before the debate, The Progressive Change Campaign Committee, Democracy for America, and MoveOn.org announced that their combined 10 million members wanted the 2016 Democratic presidential candidates to address some of Warren's biggest progressive talking points, according to USA Today. But was Elizabeth Warren at the Democratic debate to see the candidates attempt to address common Warren talking points, like the Black Lives Matter movement and income inequality? Unfortunately, she didn't crash the debate.

The three progressive organizations named above all wrote to the Democratic debate participants, identifying themselves as the "Warren wing" of the Democratic party. In their letters, they said that their members would like the candidates to embrace Warren's "economic populism," and address four key issues: debt-free college, expanding Social Security benefits, Wall Street reform, and the Black Lives Matter movement, USA Today reported. The candidates did address Wall Street reform and the Black Lives Matter movement, but probably because they've been central to both Vermont Sen. Bernie Sanders' and former Secretary of State Hillary Clinton's campaigns. Whether Warren approved of their comments is another question entirely, though, because she didn't attend the debate, and may not be watching at all because she was in the middle of a six-day congressional trip to Europe, according to The Boston Globe.

Warren made the trip to Europe to discuss economic issues and the Syrian refugee crisis. She told the Globe in an interview Tuesday that she saw, first hand, the "paper thin" rafts that refugees have used to flee Turkey and attempt to make it to the shores of Greece:

The desperation of people fleeing Syria is something you can touch. Everything you read about the number of people trying to get out of Syria, who are trying to make it to a place of safety, changes when you see them in person.

During the trip, Warren and Sen. Jeanne Shaheen of New Hampshire visited Ukraine, Greece, and Germany where they met with Greek leaders and United Nations officials. Warren told the Globe that she met with refugees who were told by traffickers to cut the bottom of their rafts if they saw the Greek Coast Guard. Yes, the raft would sink, but then the Coast Guard would be forced to rescue them. She said she also met with refugees who left Syria and started new, better lives:

We met civil engineers, we met Ph.D.s. We met people who in any ordinary time could build a strong future for themselves and for their country. But they have no opportunities in Syria. We are all deeply concerned about security issues and the importance of vetting people. It’s clear that good procedures are not yet in place. But it’s also clear that there are many people here who could benefit Europe, the United States.

Warren probably would've watched the debate, but it's pretty clear that she was busy addressing important, real life crises, which is true to her walk-the-walk style.