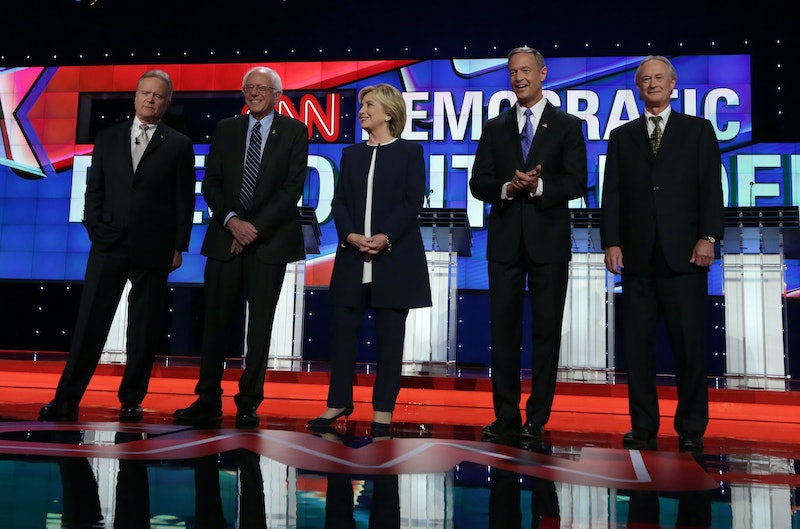 On Tuesday night, the Democratic group of 2016 presidential hopefuls gathered at the Wynn Las Vegas hotel and casino in Nevada to debate policy issues and explain why they'd be the best candidate for the job. Former Secretary of State Hillary Clinton, Vermont Sen. Bernie Sanders, former Maryland Gov. Martin O'Malley, former Virginia Sen. Jim Webb, and former Rhode Island Gov. Lincoln Chafee all discussed a variety of political issues, from gun control to climate change. And while all of the candidates made great points about various issues, many Twitter users were more lighthearted about the Democratic debate.

Before the debate started at 8:30 p.m. Eastern time, Twitter users were already joking about Lincoln Chafee's love of the metric system. (Plenty of Twitter users also expressed their hope that Vice President Joe Biden would show up at the debate, too.) But the real fun, both in Las Vegas and on Twitter, happened when the event began. The debate's moderator, CNN's Anderson Cooper, also asked the candidates about their positions on hot-button issues. Cooper was quick to hit the candidates' weak spots, too, asking Martin O'Malley about his "zero tolerance" policies on crime in Baltimore, Maryland, and asking Hillary Clinton about her so-called flip-flopping on issues like the Trans-Pacific Partnership. And the candidates weren't afraid to go on the offensive about each others' positions, with Clinton stating that Sanders isn't tough enough about gun control. The candidates delivered plenty of great one-liners without Twitter's help, but the tweets only add to the night's events.

Hillary Clinton also sent a good-natured tweet ahead of the debate, sharing a GIF from her guest appearance on Saturday Night Live.

As the debate went on, Twitter users were quick to express their praise for — and frustration with — the candidates' performances and moderators' questions, often to hilarious effect.

And the debate would have been much more entertaining if some of these things had actually happened.

The Daily Show's Twitter account also took various jabs at the presidential hopefuls, assigning them fake "achievements" based on their expressions during the debate.

When Lincoln Chafee appeared to have mentally checked out of the debate, it was time for GIFs and jokes about falling asleep.

And Martin O'Malley wasn't safe from jokes about his robot-like appearance.

But one of the audience members drew attention away from the candidates:

Let's just say people on the Internet know how to be funny.

And it couldn't end better than with this.