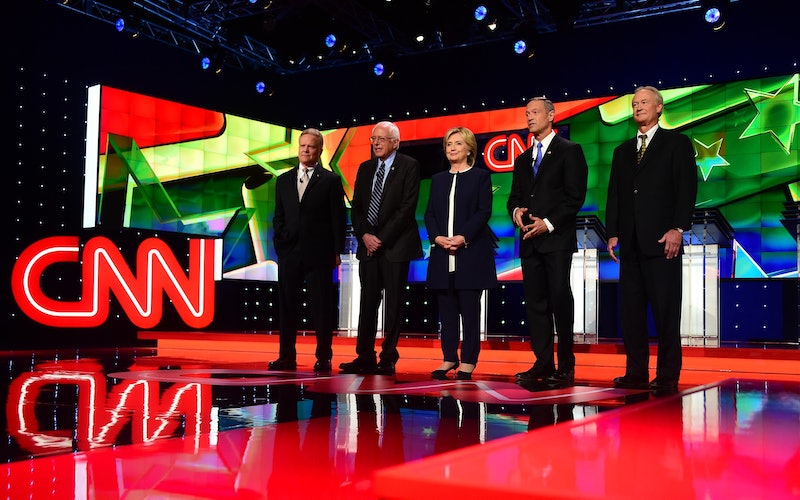 The Democratic debate went down in Las Vegas, Nevada Tuesday night, and it saw a pair of contenders in Hillary Clinton and Bernie Sanders face off against three distant underdogs — Martin O'Malley, Jim Webb, and Lincoln Chafee. And despite the last name on that list sorely needing some attention and distinction on some issue, he failed to tout one of his signature proposals. Why didn't Chafee mention the metric system during the Democratic debate?

Well, Chafee actually didn't get to speak anywhere near as much as his rivals, clocking in a total time of just over eight minutes. (Clinton and Sanders both spoke for roughly half an hour.) He hasn't been shy about this notion before — he's the only one of the five Democratic candidates who's come out in support of an American conversion to the metric system, a move which would bring our system of measurements in line with basically the entire rest of the world. At present, all but three countries on Earth utilize the metric system: the United States, Liberia, and Myanmar.

It's an issue that often doesn't get taken too seriously when it's brought up — and it probably wouldn't help that image if Chafee were the one bringing it up, instead of a bona fide contender like Clinton or Sanders — but it still would've been nice to see it get some national attention.

Look, there's no denying the somewhat grim facts facing Chafee's campaign. He's arguably the least known, least visible candidate in either party's nominating race, and would definitely be so if not for the continued candidacy of Jim Gilmore on the Republican side. Basically, he's fighting it out for a few shreds of coverage here and there, down in the muck with Webb and O'Malley, while Clinton and Sanders are dancing around one another in the upper tier.

If nothing else, it would've been nice for Chafee to have at least gotten the other candidates to go on the record on the metric question. Trying to help frame the debate that other, more successful candidates are having is one of the only real, meaningful functions someone in Chafee's position can perform, and it's a real shame that he wasn't more willing to give it a shot.