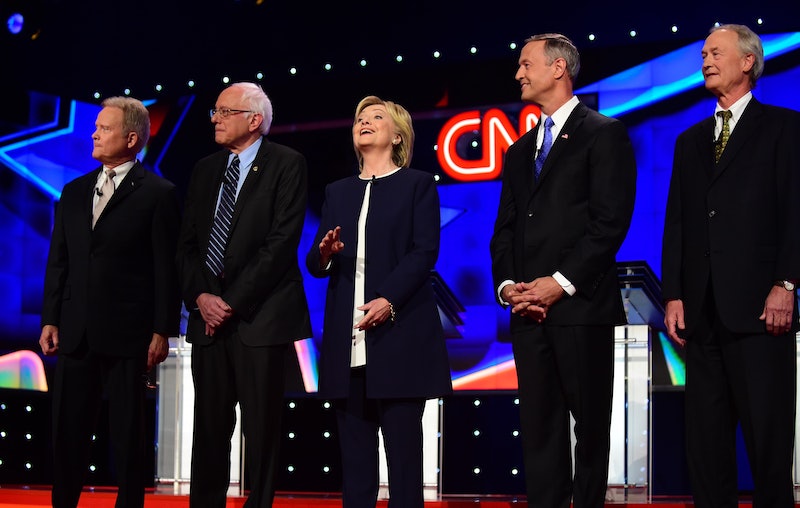 What's so endlessly wonderful about Donald Trump tweets about the Democratic primary debate is how dependable they are. In a way, you gotta give it up to Trump for knowing how to get maximum visibility out of a debate he's not even a part of: take it to Twitter. (Hey, don't act like you don't keep one eye on the TV and one eye on your feed.) By not only live-tweeting the DNC primary debate, but giving typically loud, advanced notice about his intentions to live-tweet the event, Trump tried to make sure he was maximizing the number of eyes he could capture on Tuesday night.

And that's what you can generally count on about Mr. Trump: his unfailing ability to gain people's attention, even in contexts where he is categorically excluded. That, and his equally unfailing talent for saying truly audacious things once he's reached up and turned the spotlight squarely upon himself. And it looks like his efforts might have paid off during the DNC primary debate.

Is anyone else starting to feel like the best part of the 2016 election so far is Trump's running commentary over the whole thing? And I don't mean "best" in the way that, say, delicious cheese or a cute baby or a viable presidential candidate is the "best." I mean "best" like when your not-so-favorite coworker gets too turnt during Friday's in-office happy hour and starts singing "Come On Eileen" to your boss. In that way, Trump's election commentary is truly the best.

But out of all of the reliably Trump-esque tweets issued by The Donald over the course of Tuesday night's debate, there is one that didn't even come from Trump himself, yet perfectly summed up his ability to turn someone else's show into his gain:

Of all the many (many) criticisms you could throw at Trump, you gotta give it to the guy: He knows how to get attention (as do toddlers).