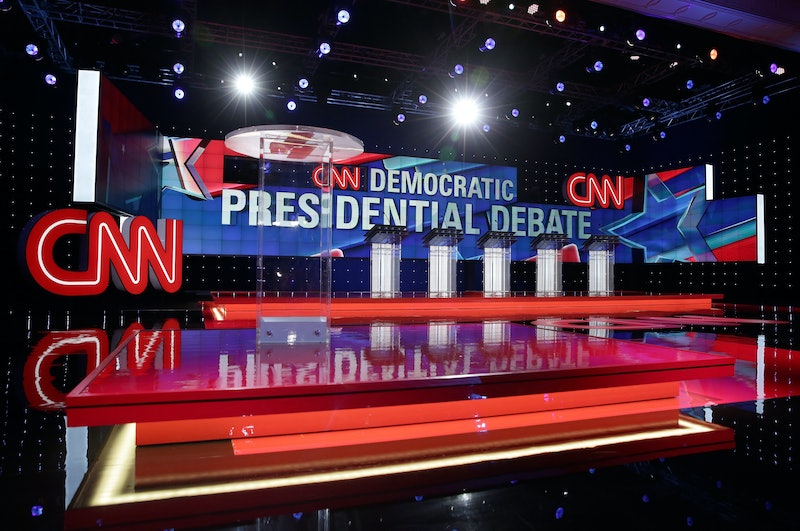 It may not be Showtime at the Apollo, but even politicians need a hype man (or woman) to get the audience going. So, who's the woman in opening the first Democratic debate, telling jokes and getting the crowd wild? Why, it's Democratic National Committee chairwoman Debbie Wasserman Schultz. The DNC leader took to the stage before the anticipated Democratic debate to deliver opening remarks — as well as a joke or two. Given her "America is already great hat," we're sure there was some Donald Trump ribbing going on.

It's no surprise that Wasserman Schultz was hosting the pre-debate events, including answering questions in the #DemDebate Facebook Lounge. A fixture at national Democratic events, the U.S. representative of Florida has been leader of the DNC since 2011, when she was appointed by President Obama.

Yet Wasserman Schultz comes with some controversy. According to The New York Times, Rep. Tulsi Gabbard (D-Hawaii), a DNC vice chairwoman, said this week that Wasserman Schultz uninvited her from Tuesday night's debate. Why? Because Gabbard reportedly wanted more that six Democratic debates to be held this election season.

This isn't the first time Wasserman Schultz has sparked some pretty obvious controversy. Prior to the 2012 midterm reelections, the DNC chairwoman infamously told Democratic candidates to not mention Obama anywhere on the campaign trail. It was awkward... but not as awkward as this "America is already great hat."

But it's OK, Deb. You're still the only hype woman for us.