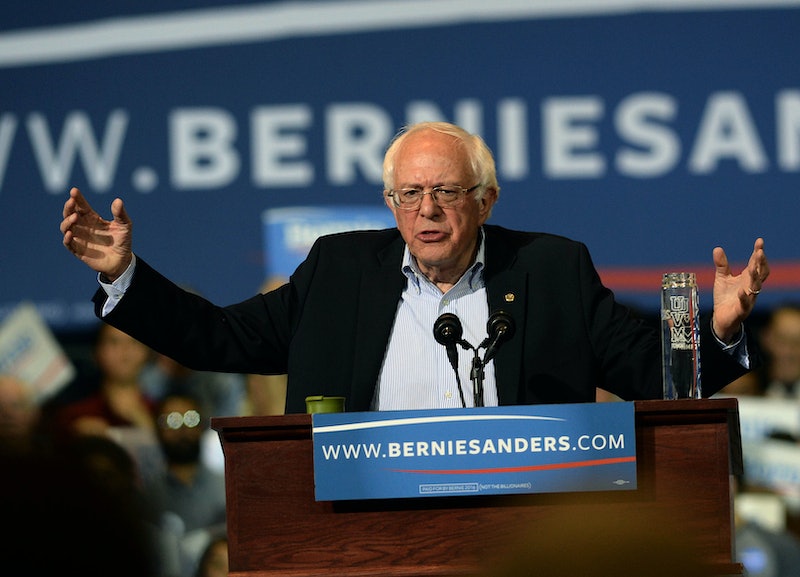 On Tuesday night, the CNN-hosted Democratic primary debate beamed five candidates into millions of Americans' homes, and at least two of them you've probably heard of by now: Hillary Clinton, of course, and that inimitable Democratic socialist senator from Vermont, Bernie Sanders. The two were undoubtedly the headliners of the event, but even Sanders isn't quite as ubiquitous as the former secretary of state, so it's possible this was your first time actually hearing him speak. And if so, you might wonder: where does Bernie Sanders' accent come from?

He's got a pretty signature tone and delivery, there's no doubt about that, especially on a presidential debate stage, and it makes sense given the city of his upbringing. So, where'd he get that accent? From the Brooklyn of his youth, in the 1940s and 1950s. Sanders grew up in the New York City borough, specifically in the Flatbush neighborhood, before ultimately attending the University of Chicago and moving to Vermont in 1968. In short, Sanders' accent is a product of the place and culture in which he was raised, a sound distinct within Brooklyn's Jewish community. All in all, it strikes a pretty impressive, authoritative tone on the debate stage.

Sanders' voice has a raspy, friendly quality, the sort of warm, resonant, income inequality-fixated voice you could imagine tucking you in at night. Just listen to Sanders speak at a recent campaign rally in Portland, Oregon — it was a doozy in terms of attendance, with more than 25,000 people reportedly in attendance.

It's sort of nice, isn't it? There's nothing like the dulcet tones of a liberal champion of the Senate, calmly but forcefully cautioning you about the perils of income inequality, rapacious banks, and the deregulation of our financial industry. Sanders is running solidly in second place behind Clinton, and he's actually leading in some states, most significantly the early battleground state of New Hampshire. And if recent history is any indication, you'll be hearing a lot more of Sanders in the weeks and months to come.