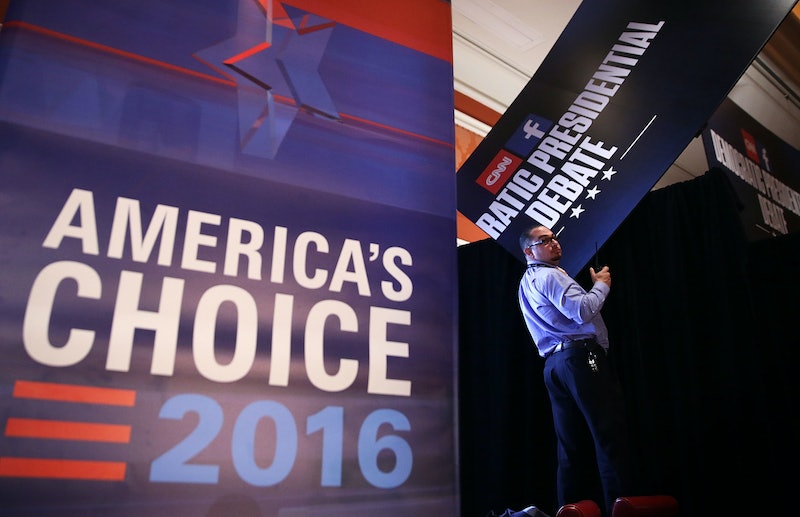 Las Vegas attracts all types, and apparently that rings true for even when politicians take over. Apparently the Wynn hotel opened its doors to a hippie Santa, who was spotted at the Democratic debate Tuesday night. This leaves us with a lot of questions: Why does Santa look like he has been at a Phish show? What about the Democratic platform attracts Santa? And, perhaps most importantly, did he bring the Democratic presidential candidates presents?

Early in the debate, the camera was panning the crowd gathered to see the first Democratic presidential debate. Most of the crowd was exactly what you'd expect from a politically minded audience — suits, tasteful skirt and jacket sets, and a lot of slick hair cuts (even Bernie Sanders had his mane under control!). The most surprising thing was a woman in regular snappy casual dress rather than D.C. snappy casual dress. It's not exactly New York Fashion Week, people.

But then, just as your eyes started to glaze over the lump of beige pantsuits and understated accessories, there was this glorious human:

Let's give you a closer look:

It was like Big Foot being caught on tape. Who is this man? Who is he voting for? Why did we all collectively agree that his name should be hippie Santa? Twitter seemed to recognize what a special occasion this was, and they celebrated accordingly.

Yes, yes, you can, Derrick:

Oh, wait. Not that hippie Santa. This one!

Other theories include that hippie Santa is Uncle Joe Biden in disguise, which would actually be Biden surfacing in his completely natural state.

It seems that hippie Santa has retreated to the North Pole or Boulder, Colorado, or wherever hippie Santa resides, because he hasn't made any other appearances during the debate. Perhaps he's trying to be sensitive to any children watching the debate.

There does, however, seem to be a copycat Santa inside of the press filing room at the debate. Please note the hair is a dead giveaway for a non-hippie Santa.

Come back, hippie Santa. We already miss you.