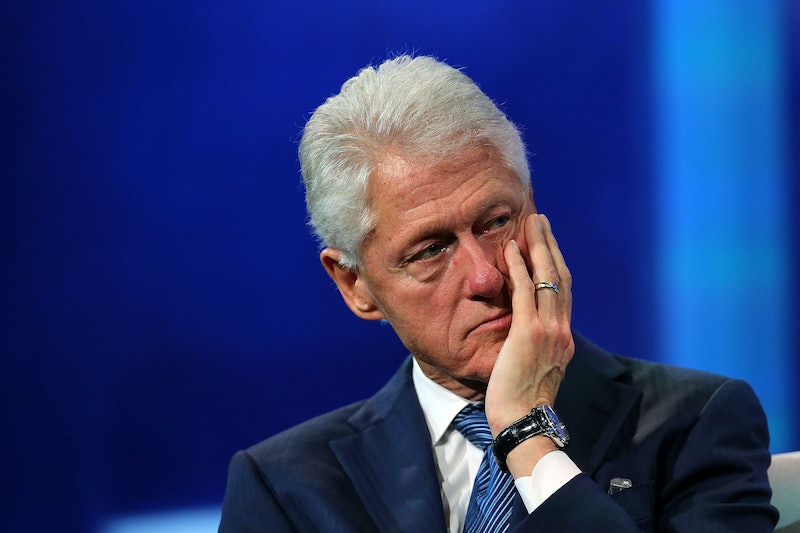 Tuesday night marked the first debate of the Democratic presidential season, aired by CNN. It featured a showdown between contenders Hillary Clinton and Bernie Sanders, and a trio of underdog up-and-comers in Martin O'Malley, Jim Webb, and Lincoln Chafee. One person it didn't feature, however, was former president and potential First Husband Bill Clinton. But in case anybody thought that he was focused on something else, he revealed on Twitter that's he's following along like the rest of us — Bill Clinton tweeted himself watching Hillary's debate from his hotel room, saying he was watching her "prove she's the most qualified candidate for POTUS."

As CBS News details, it's not exactly a surprise that Bill decided to skip out on attending the debate. He hasn't shown up at any of Hillary Clinton's presidential debates to this point in her career, a staggering zero-for-26 mark from Tuesday night clear back to her previous slate of 2008 debates. There's no way to know for sure why he prefers to stay away on debate night — it could be a consciously political choice, or it could be a simple matter of personal preference. But he could never be accused of not supporting the campaign, as he's already been an active force as a fundraiser.

You could hardly argue that Bill's absence hurt her performance, however — with far more national debate experience than anyone else on the stage, she was composed, confident, and in-command throughout the evening, despite a thoroughly successful, at-times charming performance from her chief rival, Vermont Sen. Bernie Sanders. She was also without her daughter Chelsea in attendance, who was otherwise engaged with a book tour in Louisiana, but she did have longtime friend and aide Huma Abedin by her side.