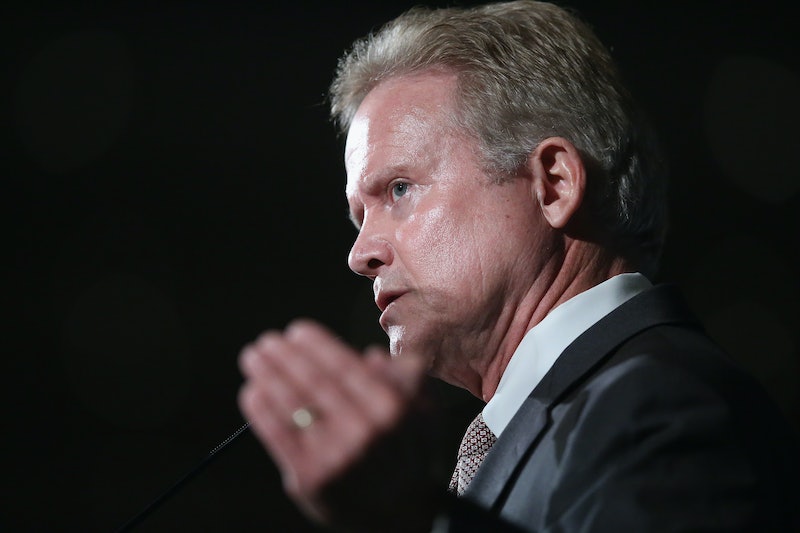 Jim Webb, aka the Democratic candidate most people didn't know existed before the first Democratic primary debate Tuesday night, is having a moment. Well, OK, maybe he just had one real moment so far tonight — I'm talking about when Jim Webb shut down Anderson Cooper. Here's how it went down: Cooper asked the candidate about the time in 2006 when he called affirmative action "state-sponsored racism," and the fact that in 2010, he also wrote an op-ed saying affirmative action was discriminatory against whites. "Given that nearly half the Democratic Party is non-white, aren't you out of step with where the Democratic Party is now?" Cooper asked.

That's when Webb pretty much shut Cooper down — and refused to be cut off by Cooper, going on this monologue instead.

No, actually I believe that I am where the Democratic Party traditionally has been. The Democratic Party, and the reason I've decided to run as a Democrat, has been the party that gives people who otherwise have no voice in the corridors of power a voice. And that is not determined by race.

And as a clarification, I have always supported affirmative action for African Americans. That's the way the program was originally designed because of their unique history in this country, with slavery and the Jim Crow laws that followed. What I have discussed a number of times is the idea that when we create diversity programs that include everyone, quote, "of color," other than whites, struggling whites like the families in the Appalachian mountains, we're not being true to the Democratic Party principle of elevating the level of consciousness among our people about the hardships that a lot of people who happen to be have — my culture, by the way.

Personally, I'm not sure I buy it. But Twitter, of course, loved it. A few samplings:

The next debate is Nov. 14. It's too be determined whether Webb will be there, or not.