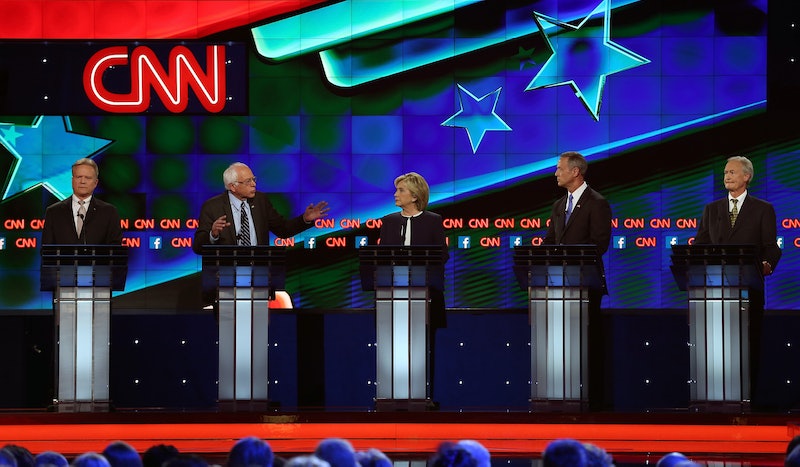 Bringing up gun control at a Democratic debate is how to turn the conversation from friendly to fierce real fast. At the outset of the presidential debate Tuesday night, gun control wasn't slated to be the primary issue. In the candidates' opening statements, Martin O'Malley was the only one of the five to even mention guns (the former Maryland governor brought up comprehensive gun safety legislation as one of his past accomplishments). But not necessarily being the topic of highest priority certainly didn't mean it would be ignored. Far from it, actually. Moderator Anderson Cooper sought the candidates' positions on the issue before viewers could even allow Lincoln Chafee's "block of granite" metaphor to really sink in.

Cooper started off the conversation by pointing out the sizeable presence gun control has held in the national conversation, stating that "over the last week, guns have been the most discussed political topic on Facebook by two to one." And after three more university shootings in the last two weeks, it's an easy stat to believe. So what did the candidates say to ensure viewers we would see reform? In short, that they'll be better at it than Bernie Sanders.

Here are the statements that sum up how the five candidates ultimately packaged (sorry Bernie, not sure you can do a take-back now) their individual stances on the issue.

The blunt statement by Hillary Clinton, in response to Cooper's asking if Sanders is tough enough on guns, was another attempt (a pretty successful one, too) to distinguish herself as an extremely vocal supporter of hefty reform in areas like background checks and banning ownership of assault weapons. Bernie may not be tough enough against the NRA, but according to Hill, she sure is.

2. "It's Time The Entire Country Stood Up Against The NRA."

A lot of talk about the NRA and its lobbying against stricter gun laws went down. And with this statement, Secretary Clinton flat-out refused any more bullying from the pro-gun association.

3. "There Are People At High Levels In This Government Who Have Bodyguards 24 Hours A Day, Seven Days A Week. The Average American Does Not Have That, And Deserves The Right To Be Able To Protect His Family."

Though Jim Webb's idea of basically giving every American citizen a Secret Service squad sounds cool, the reality is that pushing for stricter gun laws would probably not be on his Presidential to-do list.

4. "Everybody Else Has To Be Accountable, But Not The Gun Manufacturers. And We Need To Stand Up And Say: Enough Of That."

Sanders maintained during the debate that a bill he voted for back in 2005, which provided gun manufacturers with exemption from liability, made sense, but Clinton was all about making gun manufacturers just as accountable as any other industry.

Martin O'Malley saw the opportunity to attempt to demonstrate that he's already been successful in the area of gun safety, and he sure as heck ran with it. Already passed legislation in his own state? Check. Dealt with opposition to get it done? Check. Ready to unrig the rigged game of going up against gun manufacturers? Check.

6. "The Views On Gun Control In Rural States Are Different Than In Urban States, Whether We Like It Or Not."

Sanders's background as a senator from Vermont has meant a lot of delicate balancing between supporting and restricting the ownership of guns. And his defense mechanism during the debate on gun control — that he supported reform, but a kind of gun reform where there is a consensus among all Americans — didn't really pan out. Rural states are different? All I hear are excuses.

7. "I Would Bring The Gun Lobby In And Say 'We've Got To Change This. Where Can We Find Common Ground?'"

8. "When The NRA Wrote To Everyone In Our State ... Lies About What Our Comprehensive Gun Legislation Is, I Wrote Back To Them."

O'Malley pretty much won with this, though Clinton put up a good fight. In the effort to present himself as someone who doesn't fear going up against the NRA and Sanders as someone who panders when it comes to guns, O'Malley succeeded.

And just as icing on the cake, O'Malley made sure to remind Sanders and everyone else that he has the lowest voting rating from the NRA (even better than the measly D-minus that Sanders touted). F for fierce, O'Malley.