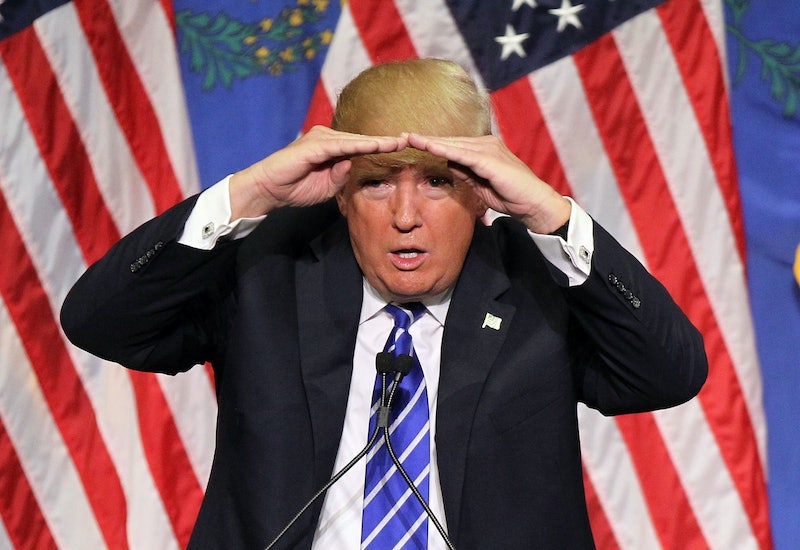 If you got a little giddy when you heard Donald Trump would be live-tweeting the debate Tuesday night, you definitely weren't alone. I do believe the entire Internet was right there with you — which is why, when it finally came time to tune into CNN's coverage, many were just as quick to fire up @RealDonaldTrump on Twitter. And lo and behold, the Republican candidate was tweeting up a storm before the debate even started. But perhaps even better than following along with the candidate himself was seeing how people hated Trump's debate tweets — which were pretty enjoyable all on their own. And good thing, since Trump's own tweets were kind of a snooze fest for much of the night.

For the hour leading up to the debate (and even for much of the first half), Trump's tweets were pretty much a lot of the same: The candidate spent much of his time calling the debate itself, and the candidates on stage "boring." The Donald mostly retweeted fans of his who agreed with him, or gushed that they wished he was up on stage instead of Bernie or The Hillz. Still, even if Trump was falling asleep on the job, the good people of Twitter were rolling up their sleeves and making up for the candidate's lackluster live-tweeting — by responding to Trump by either throwing punches or throwing zingers.

Yep, it's safe to say there were a whole lotta people out there tonight that collectively wishing Trump would get his Twitter license revoked for good. And they weren't mincing words.