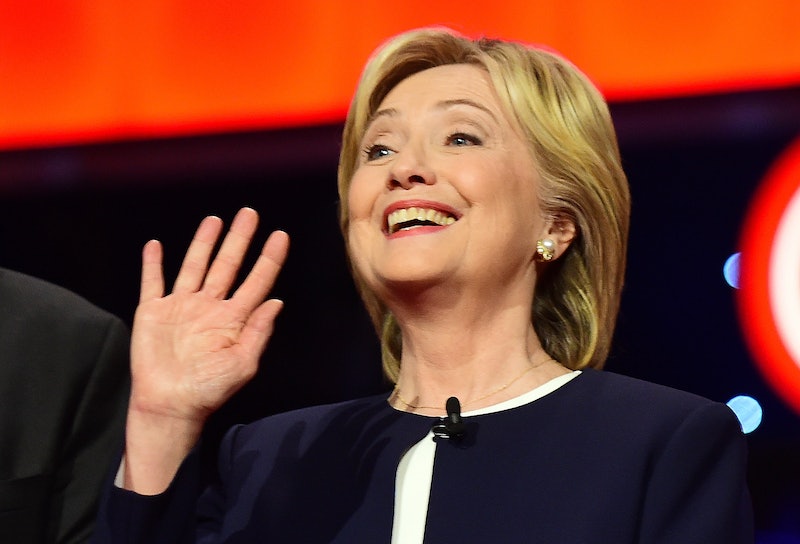 Y'all, I'm starting to feel bad for Lincoln Chafee. Aside from being the wait-who's-that candidate of Tuesday night's first Democratic debate, he tried to go up against the big dogs and was bitten. When Chafee started to wind on about ethics, host Anderson Cooper asked if Hillary Clinton would like to respond about her email server. And she did, but with one word only: "No."

It was a one-two punch for Clinton and her email scandal, but not in the way you might be thinking. Precisely no one was surprised when Clinton's private server was introduced into the debate, but it was surprising when Bernie Sanders came to her defense.

Let me say something that may not be great politics, but the secretary is right — and that is that the American people are sick and tired of hearing about the damn emails. ... Enough of the emails, let's talk about the real issues facing the United States of America.

It was an amazing moment of solidarity within the Democratic party. Clinton heartily shook Sanders' hand, seeming genuinely happy that someone said what everyone who pays attention to political coverage was already thinking.

But then here comes Chafee to rain on everyone's parade. Because we all most certainly care for him to weigh in on this debacle! I'm sure he's got some very unique perspective that we haven't heard before!

With a seemingly collective eye roll from America and the rest of the stage, Chafee continued to press on about the use of a private email server, saying that ethics matter. Then this bit of political magic happened:

Anderson Cooper: "Secretary Clinton do you want to respond?"Hillary Clinton: "No."

If there was a mic to drop, Hillary would've dropped it right then and there. I guess she could have flipped over the podium if she really wanted to, but it seems like Clinton is content to keep things short, sweet, and lady boss fabulous.

It was the perfect response to a very tired question. There's a time and place for Clinton to address the email scandal, certainly. And she did, when the public, fellow politicians, reporters, etc., asked her again and again and again. But when Chafee asks her right after an adorable moment the likes of which have never been seen during a political debate? That was the perfect opportunity for Clinton to speak her mind.