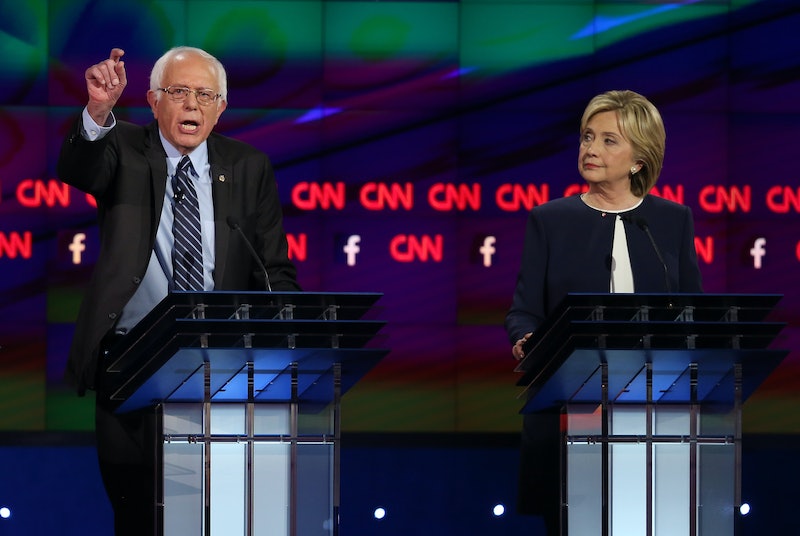 Bernie Sanders has come a long way when it comes to Black Lives Matter — at least when it comes to his rhetoric around it, that is. Asked at the first Democratic presidential primary debate by a CNN viewer whether "black lives matter or all lives matter," Sanders answered quickly and emphatically: "Black lives matter. And the reason they matter is the African-American community knows that on any given day, some innocent person like Sandra Bland can get into her car and then three days later she's going to end up dead and in jail."

It's a much clearer answer than the one Sanders got into hot water for back in June, back when he was pressed on whether he embraced the phrase on NPR.

We need a massive jobs program to put black kids to work and white kids to work and Hispanic kids to work. So my point is, is that it's sometimes easy to worry about which phrase you're going to use. It's a lot harder to stand up to the billionaire class.

That response got him into some trouble, but according to a recent New Yorker profile, his mention this Tuesday night of Sandra Bland's death is probably no accident. In fact, her death might have been his major turning point. He told reporter Margaret Talbot shortly following Bland's death:

"The issues these young people raised are enormously important," he said. The video showing the arrest of Sandra Bland, the African-American woman who died in a Texas jail, had just been released, and Sanders seemed shaken. "It impacted my night's sleep," he said. "I don't sleep that great, and it made it even worse." He went on, "It's hard to imagine if Sandra Bland was white she would have been thrown to the ground and assaulted and insulted." Sanders, speaking more broadly about police violence directed at black people, said, "I plead guilty — I should have been more sensitive at the beginning of this campaign to talk about this issue."

A change of heart, perhaps. But hopefully, simply a more tactful understanding of how to best express his solidarity.

Sanders' campaign manager Jeff Weaver told CNN that the candidate was planning to use the debate tonight to connect with black voters, with whom he tends to remain an unknown.

"We're raising the minimum wage to $15 an hour that will give 50% of African-American workers a raise," Weaver told CNN. "These are issues that are obviously important to all of America, but in many cases because of the disproportionate amount of poverty in the African-American community, many of these issues will affect this community even more strongly."

A response, perhaps, to the many Black Lives Matter activists who have interrupted Sander's speeches this summer demanding that he pay more attention to these issues.