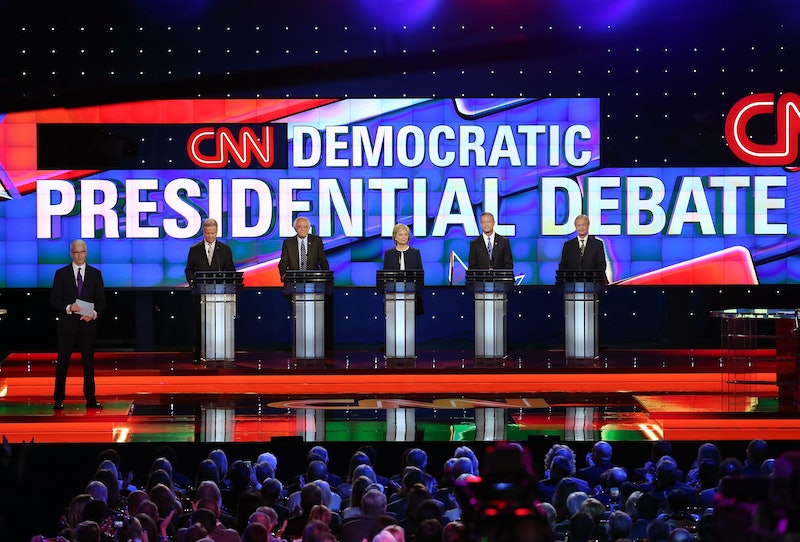 Anderson Cooper wasn't the only one hoping to ask the big questions of contenders at the Democratic Debate Tuesday night. CNN had viewers submit questions they would ask the five Democratic presidential candidates on the debate stage in Las Vegas, and Facebook users made it clear that they want gun control to be a key issue in the 2016 election. The top two Democratic debate comments were about recent shootings — and both were from family members of shooting victims. Andy Parker, the father of Alison Parker, the broadcast journalist who was fatally shot in August, posted on Facebook:

My daughter, Alison, was living her dream life as an on-air reporter in Roanoke. Then she was shot and killed on live television. There are common-sense laws that can reduce this senseless violence. As President, will you commit to working towards requiring background checks for ALL gun sales?

My mom, Dawn, was the Principal of Sandy Hook School. She was shot and killed along with 25 others almost 3 years ago. What do you think are the top three things the next President needs to do in order to make sure fewer families have to go through the pain that mine has?

Considering both comments had nearly 2,000 likes, other Democrats wanted candidates to answer these questions too.

The issue of gun control did come up during the debate, and Hillary Clinton and Martin O'Malley criticized Bernie Sanders for voting against legislation that would require a background check to buy a gun. Clinton said that she favors background checks, as well as liability for gun manufacturers. Sanders responded to the criticism by saying: "All the shouting in the world is not going to do what all of us want, and that is keep guns out of the hands of people who should not have guns." He also defended his stance on manufacturers, saying that he doesn't believe a small gun shop should be held accountable if it legally sells a weapon to someone who uses it for murder.

Although Smegielski and Parker's exact questions weren't asked, it's promising that the topic of gun control came up during the debate, and that the candidates passionately argued their stances. Hopefully, it will continue to be a prominent issue throughout the election.