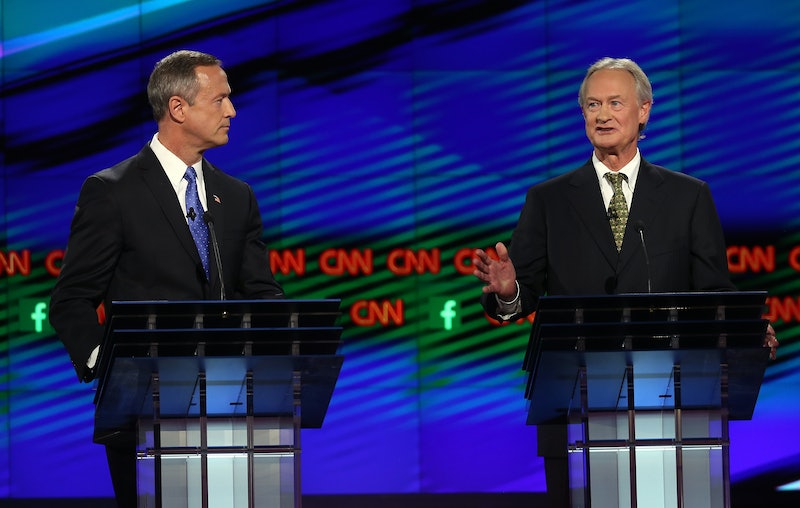 Martin O'Malley is known as a vibrant, happy candidate. He may have been smiling a bit more as the Democratic debate progressed, but his initial body language showed a tension not necessarily aligned with the demeanor of his fellow politicians. Tuesday night's debate has been a bit of a love fest for the left, with the likes of Bernie Sanders defending Hillary Clinton and O'Malley himself supporting Sanders — at least, verbally. The former governor of Maryland has been explicitly championing his fellow candidates, but it's Martin O'Malley's fierce death stare that's getting all the attention.

During Clinton's statements in the middle of the debate, O'Malley stood to the side of his podium with his left shoulder facing the audience, staring directly at the Democratic frontrunner. He had a deadpan, almost angry expression that set off a social media firestorm. His body language was just as antagonistic during a statement made by former Rhode Island Gov. Lincoln Chafee. The first Democratic debate has been an important proving ground for relative unknown candidates like O'Malley. He's already set himself apart by playing guitar prior to taking the stage. Maybe he got performance anxiety without the instrument, and simply froze as Chafee and Clinton were speaking.

Despite the roller coaster of emotions he appeared to be going through, he came off as a surprisingly conscientious candidate. O'Malley's closing statement certainly shows a presidential hopeful as attuned with the voting public as he is with his own feelings. Just think how much his poll numbers would rise if he were to channel that energy into a guitar-driven song.