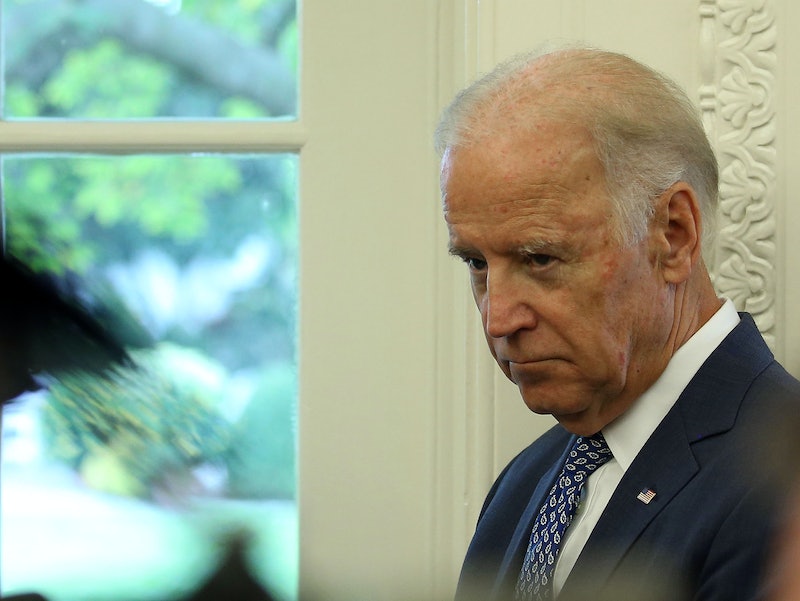 Tuesday's debate among Democratic presidential hopefuls included discussion of many topics, but women's issues weren't the only thing that went barely mentioned. While many people — and CNN itself — were holding out for Vice President Joe Biden to join in on the debate between 2016 contenders at the last second, he didn't participate in the event. But moderator Anderson Cooper and the five candidates on stage — former Secretary of State Hillary Clinton, Vermont Sen. Bernie Sanders, former Virginia Sen. Jim Webb, former Rhode Island Gov. Lincoln Chafee, and former Maryland Gov. Martin O'Malley — didn't mention Biden at the debate, either.

On the one hand, it may not seem too surprising that the focus wasn't on Biden during Tuesday's event. Biden has not declared a presidential bid for the White House in 2016, and it would be counterintuitive for the candidates onstage to draw attention to someone who could still be a gamechanger in the Democratic primaries. If Biden does decide to join the race later on, he'll have plenty of attention in future discussions. For now, Tuesday's event was these five candidates' chance to show why they would be better suited for the presidency than each other, as well as Biden.

While the vice president, 72, has been notoriously coy about any potential presidential ambitions, Biden wouldn't be the first person to delay announcing his candidacy. And if he does announce a 2016 bid for the White House, he would be a formidable opponent for the participants in Tuesday's debate. A recent Reuters/Ipsos poll found that 48 percent of Democrats in the United States wish Biden were a contender in the Democratic primary, as do 36 percent of independents. Thirty percent of Democrats, meanwhile, said that Biden should stay out of the 2016 presidential race. The poll, published Monday, surveyed 1,431 adults in the United States, 580 of whom identified as Democrats.

It makes sense that the Democratic presidential hopefuls weren't eager to discuss Biden on Tuesday — the focus was on the five candidates and their presidential qualifications. But even though Biden was the subject of many Twitter jokes on Tuesday evening, the vice president is more than just a punchline. If Biden does decide to enter the 2016 presidential race, he'll be a real contender — and that's something Clinton, Sanders, Webb, Chafee, and O'Malley won't be able to ignore.