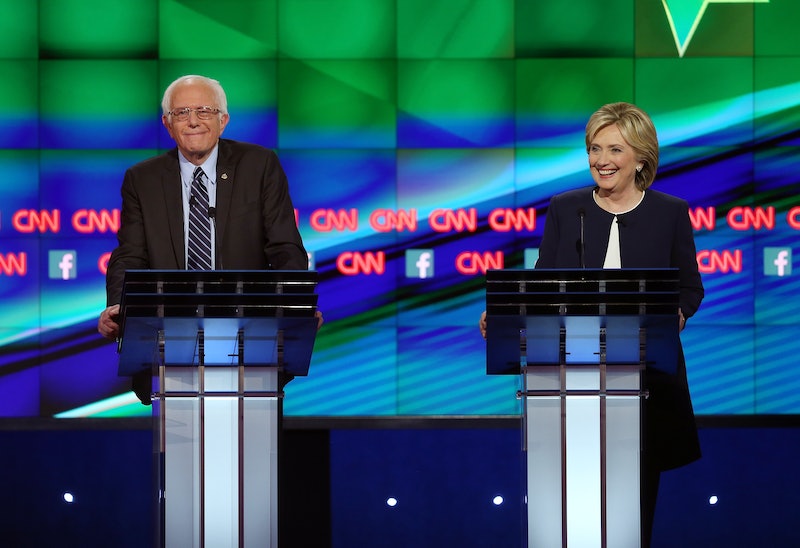 Unsurprisingly, the 2016 candidates weren't willing to let Donald Trump have all the fun on Tuesday night, as many Republicans attacked the Democratic primary debate and its candidates via Twitter. There were high expectations for Trump, who had promised to live-tweet the event on his favorite platform, but his performance during the night was a little lackluster — much like his debate performance. But rest assured, his comrades were there to pick up where he left off.

It was fair game for the Republicans, who have endured Democrats live-tweeting their way through two primary debates thus far. During the first Republican debate, Bernie Sanders' commentary had one of the biggest followings of the night. So it's unsurprising that the Republicans were eager to get their turn. But while some — like Jeb Bush — took the opportunity to point out policy differences or to question Democrats on their statements, others took it a step farther.

Mike Huckabee had some extremely interesting thoughts about Sanders. And by "interesting," I mean "horrifying." Apparently eager to rob Trump of the honor, Huckabee tweeted out what had to be the worst sideline comment of the evening to attack Sanders' tax plans:

His other tweets, though not as horrifying, weren't much better:

Rand Paul tried to used the debate to capitalize on his #LibertyNotHillary hashtag, and opted to pull attention away from the debate by live-streaming his appearance at the University of Northern Iowa. But after his speech, he managed to get a few quips in.

Bush also opted to jump on the Clinton attack train, calling out specific comments throughout the night and taking particular issue with Clinton's foreign policy statements.

There was only one attempt at humor from Marco Rubio's camp, as they encouraged their supporters to play debate bingo — and by bingo, they probably meant a drinking game.

Noticeably absent from the conversation were Ben Carson and Carly Fiorina, who each experienced substantial surges in their poll numbers following the two Republican debates. Ted Cruz was also silent — but he was a little preoccupied Tuesday night.

Thank God at least one Republican made good use of their evening.