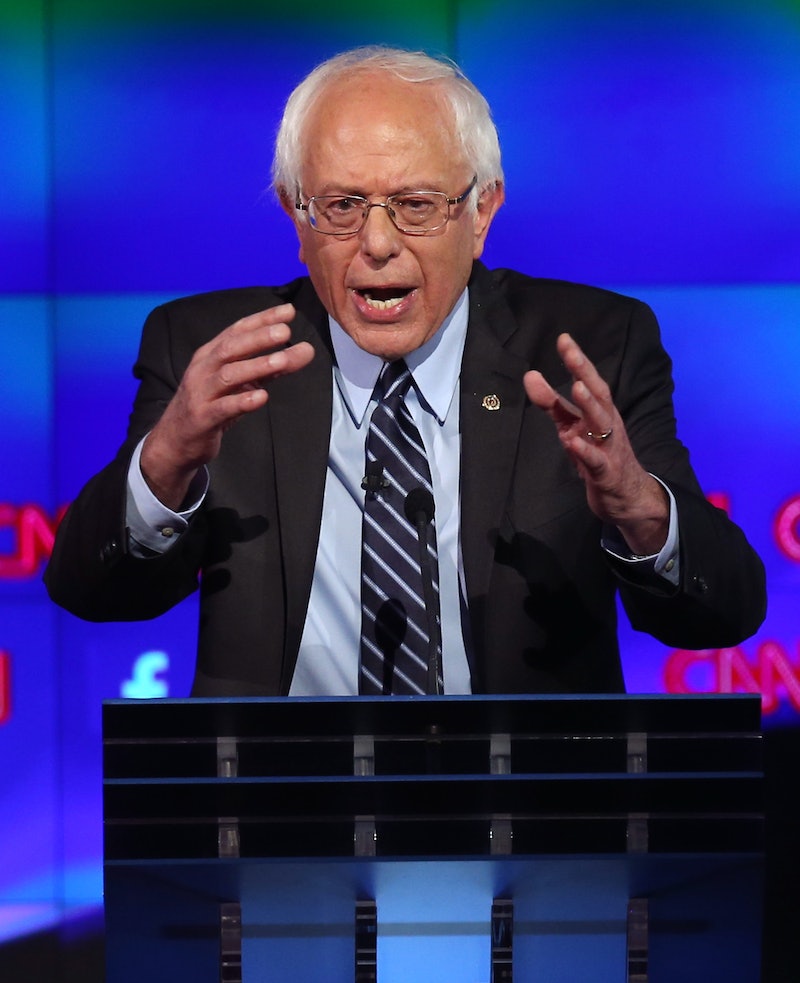 Are you getting into that Halloween spirit yet? It's just around the corner — we're almost halfway through the month of October, and believe me, your costume ideas aren't going to get more exciting or scintillating the longer you wait. If you're looking for helpful suggestions, though, maybe I can help? Here are nine funny 2016 election Halloween costumes that even the non-political types in your life will love! Assuming you have the chops to pull them off, that is.

Obviously, the political Halloween costume option is not for everyone — even if they can appeal to the neutral, not-terribly-politically minded people in your life, it's always a plus when you feel happy with what you've got on, whether that's a frumpy Bernie Sanders suit, a pastel Hillary Clinton pantsuit, or hey, even shirtless Martin O'Malley.

And let's not forget about the positively ripe options you've got on the Republican side of things — Donald Trump? Chris Christie? The inimitable former Arkansas governor Mike Huckabee? As the pugnacious GOP frontrunner himself might say, "there's plenty of subject matter there." Here are nine dynamite 2016 election Halloween costumes, because let's face it, you deserve to look on-point when the 31st finally rolls around.

Pulling off a good Sanders is like rolling a vintage car out onto the city streets. There's no telling how well it'll go over, but hey, at least it's a design classic. The components are simple enough. All you need is a slightly rumpled, dark suit — no need to bother looking too crisp when you're fighting the good fight, after all — complete with a pair of spectacles, a slick-looking bald cap, a white wig to attach to the inside of the cap (whether by glue or by staples) and if you've got the vocal talent, a reedy Brooklyn accent. Just be sure to subtly or overtly redirect all conversations back to income inequality, not because you couldn't talk about something else, but because it's so damn important.

Look, anyone can make up a cheap laugh Chris Christie costume if they just want to poke fun at his weight. But why not get a little more creative than that, huh? Just throw on the classic Republican gray charcoal suit, a solid red tie, a bridge-themed lapel pin, and hey, maybe wrap yourself in the New Jersey state flag while you're at it.

Sure, the former Texas governor isn't actually in the running anymore, having dropped out following a disastrous primary campaign. But that doesn't mean he's out-of-bounds for the Halloween season — ever since he started wearing hipster glasses, his look has been more doable than ever! As for so many of these, you'll want your traditional, charcoal gray Republican pants and suit jacket, unless you don't have a jacket, in which case a collared shirt with sleeves rolled up will do the job just fine. Slap on the glasses, and maybe a white cowboy hat, warn people not to mess with Texas, and bang! You are the Perry. Bonus points if you slip a jar of maple syrup into your pocket, and occasionally cuddle it.

Looking to take on the former Secretary of State's appearance for Halloween? Look, there's not much subtlety to this one — as major party politics goes, she's basically the only candidate out there sporting the pantsuit style, and she's got a pretty signature look. As such, it might best be captured by investing in a Hillary Clinton mask, but make sure you either get one of the good looking ones, or one of the deliberately spooky ones, because there are some bad facsimiles out there.

Alright, here's the thing: nobody really knows what Jim Webb looks and sounds like when he's not right there in front of them. Which is lucky, because the former Virginia Senator isn't the subject of dozens of Halloween masks like Clinton is. But assuming you can spring for a dark suit jacket, a close-cropped haircut, and you know how to complain about equal time, you'll pull it off. Just remember to make sure your costume gets the same amount of attention as everyone else's — "I've been waiting over here for ten minutes for you to, you know, acknowledge my costume. This, this hasn't been equal time." Also, you can casually joke about how you killed somebody one time.

This one is the classic addition-by-subtraction political costume — the whole point is for nobody to know who you are without asking. Just throw on a cheap, dark suit (or slacks with a tucked-in dress shirt otherwise), and for extra flavor and an extra hint, get a Rhode Island flag lapel pin. Then wait for the inevitable question, and have this reply ready: "I'm Lincoln Chafee, and you're looking at a block of granite when it comes to the issues."

Did you know that Mike Huckabee doesn't believe in evolution? Yes, it's true! Which gives you a great opportunity for a needling Halloween costume in just three steps! One: a dark suit. Two: a "Huckabee for President" button. And, three: an ape mask. You'll be the missing link Huckabee's been searching for all along!

There's probably going to be a lot of Donald Trumps this Halloween, owing to the real estate mogul and former TV star's unexpectedly successful presidential bid. But with so many costumes, how can you hope to stand out? With a little twist — try going as a talking Donald Trump doll, rather than the genuine article.

This saves you from having to impersonate Trump all the time. Just cut a little circular hole in the front of your suit jacket/shirt, next to a sign or Post-It note that says "PUSH HERE." When somebody does, you trot out one of three or four repetitive Trump-isms, always delivered with the precise same volume, cadence and intonation. The limited number of phrases will help you mimic his voice, without having to account for unscripted speech.

Oh, sure, if you've got a secret six-pack you could just whip off your shirt, but not all of us are quite so bold. But this one presents an opportunity not just to delight with a clever political costume, but to delight fans of one of HBO's most venerated TV shows, too — get yourself a "Carcetti For Mayor" t-shirt!

Thomas J. "Tommy" Carcetti, for those of you who're unaware, is a mayoral candidate on HBO's hit police drama The Wire, and he was partially based on O'Malley, a fact which the former Maryland governor notoriously loathes. It's understandable that O'Malley wouldn't care for the comparison — Carcetti is vain, power-hungry for power's sake, and tragically unscrupulous when it matters most. As Halloween costume fodder, however, this is dynamite — it'll help sticking an O'Malley 2016 pin on top of the Carcetti shirt.