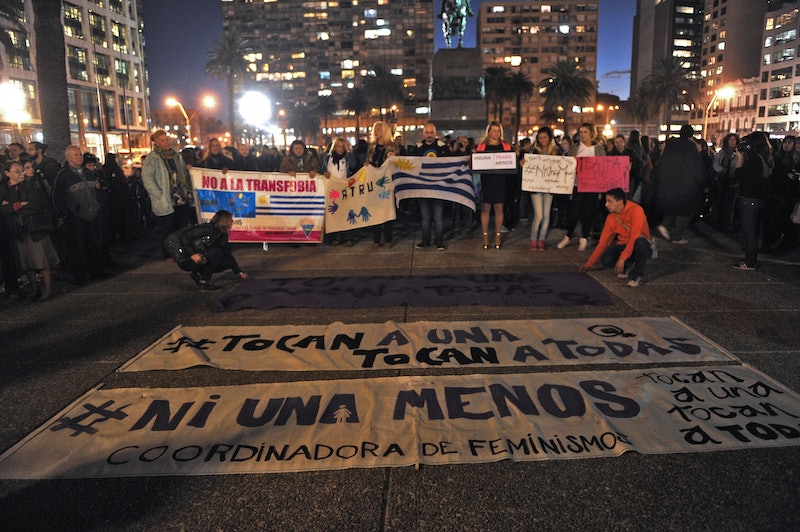 Tens of thousands of women took to the streets in Mar Del Plata, Argentina, on Monday to protest the high incidences of gender violence and femicide in the country. The march was a part of the National Women's Encounter, a yearly meeting of women in Argentina, where approximately 65,000 women spoke out against the culture of misogyny and violence towards women. Around 1,800 Argentine women have been the victims of femicide (defined as the killing of women because of their gender) between 2008 and 2014, and the government has done very little to intervene for women's safety. During the massive protest on Monday, women carried signs, chanted, and made demands for an Argentina that is safer for women. Many who participated in the protest for women's rights in Argentina tweeted powerful photos of messages with information, many using the hashtag #NiUnaMenos, or "Not One Less," which has become the battle cry of this movement.

The protest was met with resistance from police; The Argentina Independent reported that protesters clashed with Catholic counter-protesters and were injured by police, who were described as having used tear gas and rubber bullets against protesters. The Independent further reported that at least three women participating were arrested.

The urgency of the protests is evident from the social media accounts that recorded the event; the justified anger is evident throughout the protest.

Television network teleSur reported that the protest became more combative towards the end of the demonstration as protesters reached the Mar del Plata Cathedral, where protesters chanted against the church, and were met with resistance by counter-protesters who did not want the women to approach or enter the Cathedral.

Protesters began throwing garbage and other small items at those who were blocking their access to the church. Reports indicated that the protest was primarily a peaceful one.

As a part of the National Women's Encounter, participants not only protested, but also took part in workshops about gender violence. The National Women's Encounter occurs in a different city in Argentina each year during a long weekend in October, according to The Argentina Independent. This protest follows a demonstration of nearly 200,000 protesters who filled the streets of Buenos Aires after a pregnant 14-year-old girl was determined to be another victim of femicide. The International Women's Health Coalition reports that there were 277 cases of femicide in Argentina last year.