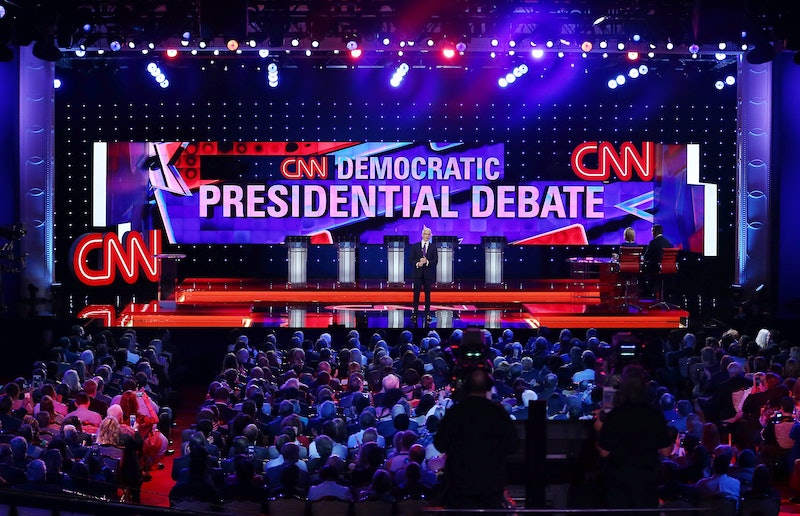 Yesterday, the five current candidates for the Democratic presidential nomination took the stage in Las Vegas for the first debate of the campaign season. Compared to the ridiculous circus-like atmosphere of the GOP debates, the Democratic event was refreshingly respectful, and even featured a legitimately congenial moment between the two frontrunners, Hillary Clinton and Bernie Sanders. They discussed climate change, income inequality, systemic racism, and violence in the Middle East. Unfortunately, a huge opportunity was lost when the debate glossed over LGBTQ rights entirely, and that's particularly devastating for transgender rights.

Over the last few years, gay rights have clawed their way into the mainstream political dialogue. During the 2012 campaign, the rights of gay, lesbian, bisexual, and transgender Americans were still largely skimmed over by the candidates. The push for trans rights has lagged even further behind the rest of our community, and has only just now begun to find a place in speeches of major political candidates.

To her credit, Hillary Clinton did make a broad mention of LGBT rights in her opening comments. But debate moderator Anderson Cooper did not ask a single question about the LGBTQ community in the course of the debate. The GOP debates, on the other hand, have provided the Republican candidates plenty of opportunity to score political points by denigrating same-sex marriage in the name of "religious liberty." Considering that the safety of any degree of rights and protections for the LGBTQ community essentially hinge on this election, it's critical that the dialogue over LGBTQ issues, and trans rights most critically, happen in more than just speeches to LGBTQ organizations. We need commitment to action, not political lip service.

In the post-Obergefell v. Hodges era, it's perhaps even more critical that gay and trans rights continue to be a part of our national political discussion. The backlash against gay marriage in more conservative parts of the country has been swift and ugly. Transgender people, even when we score a political or legal victory, are still frequently ignored, and continue to be discriminated against. In much of the US, transgender people are still struggling just to be able to use a public restroom without risking arrest, get accurate legal identification, and access appropriate health care. We still face regular harassment and humiliation when we travel by air. Most disturbingly, trans women (especially trans women of color) are still be murdered at a rate that should absolutely horrify you.

So far, the most high-profile exposure the transgender community has received in the media is the reality TV circus surrounding Caitlyn Jenner, which is probably doing trans people more harm than good. Discussing the violence and discrimination faced by trans people on a national stage the Democratic Debate would have been a huge win for public awareness about the realities that our community faces on a daily basis. More importantly, even saying the word "transgender" on that stage would been momentous step forward for the humanization of transgender people, who still remain largely objects of fascination and fetish. It was a huge moment when Bernie Sanders said the words "Black Lives Matter" and spoke the name of Sandra Bland. If he (or anyone else on the stage) had the chance to mention Lamia Beard, Amber Monroe, Keisha Jenkins, or any of the more than a dozen other trans women of color murdered this year, it would have been monumental in calling attention to these largely-ignored murders.

It's certainly not as though an interest in promoting trans rights is a universal given among the Democratic candidates. While Hillary Clinton made an impressive speech at the HRC this year, she's historically struggled with understanding the difference between trans people and gay people. Bernie Sanders has been the most consistent on trans issues, but he also seemed to need significant prodding from activists to address them more vocally. Martin O'Malley signed a key piece of transgender legislation while Governor of Maryland, but has been quiet on trans rights on the campaign trail. Jim Webb and Lincoln Chaffee have no history or statements specifically on trans issues. Allowing the issue to come up in the debate would have been a opportunity for all the candidates to solidify their public support for trans rights. And with a record-breaking number of people tuning into the debate last night, it would have reached more people than any discussion of hardships faced by the trans community ever has.

Some might ask why trans rights should hold any importance in a Presidential election when trans people make up such a minuscule portion of the US population. With both of the current frontrunners — Clinton and Sanders — doing their best to position themselves as political progressives, one of the biggest tests of those progressive values is their willingness to fight for a small, significantly disadvantaged and socially marked minority. So far, the actions of most of these candidates given reasons for transgender people to be hopeful about finally seeing our civil rights and protections addressed on a national level, but it's really disappointing that they weren't given the opportunity to prove that on the first nationally-televised event of the campaign for the Presidential nomination.

More like this
The 19 Best Tweets & Memes About Bisexual Awareness Week
By Lexi Inks
An Honest Review of MeUndies Boxers, According To A Non-Binary Person
By Megan Lasher
Pro Footballer Zander Murray Is "Blown Away" By Support After Coming Out
By Sam Ramsden
This Psychological Effect Might Be Keeping You From Hitting Your Goals
By Lexi Inks
Get Even More From Bustle — Sign Up For The Newsletter