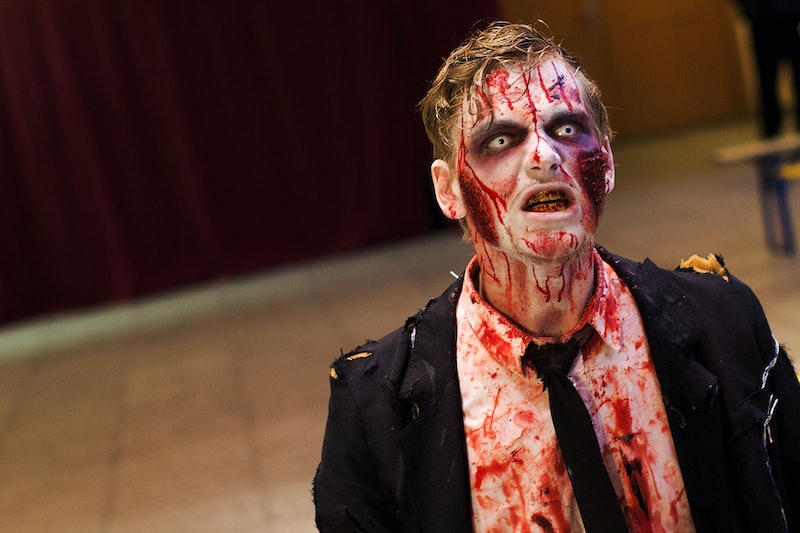 Halloween is officially super close. I still have no idea what I'll dress up as this year, but the wheels are turning and there are so many good ideas out there. For some of us, drumming up just the right Halloween look is hard, because we're not necessarily interested in something that falls under the categories of cutesy, sexy, or overly serious. But of course, it's always fun to have a costume that's topical and relevant, so it seems political costumes are where it's at this year (elections are scary, so it makes sense). For anyone with a more warped sense of humor, never fear. I have some ideas for dark and funny Donald Trump Halloween costumes, which will crack you up and hopefully delight your friends.

The core of all of these costumes will be making sure it still reads "Trump" when coupled with the dark and funny twists. Which essentially means all of them will require some variation on a suit. And don't worry, none of these costumes are super crafty; you can basically just buy and assemble. But for the makeup fans out there, a couple of these will require tutorials to get the face just right. Alright, all you twisted minds. Let's do this.

Let's start off with what Trump reminds me of most of the time: a sad and drunk clown (sorry, Donald!). For this costume, you will need the following materials:

Let's start with the wig, which will need to be blond to drive home that it's Trump, but curly to emphasize the clown factor. Somehow, there are four of these Marx brothers wigs available on eBay right now that would actually work really well.

Now for the makeup, which is really what seals the deal for this costume. You'll want to buy a clown makeup kit, and watch a tutorial on how to create a sad-looking clown face (which truly is depressing ...).

Here's a great tutorial for the makeup, though I'd say to modify it without the gems around the eyes. That just doesn't read very "Trump" to me.

Trump is always wearing a suit, so wear a matching two-piece suit with a shirt underneath. If you can find something oversized for yourself at a thrift store, that's even better (clowns don't tend to wear clothes that fit very well). You can get this costume suit for really cheap on Amazon.

Next, you need a rockin' clown tie. I like this giant red one from Party City.

Now for the drunk part. Get a liquor bottle prop, like one of these from Costume Armor, and carry it around with you all night (and have real drinks as well, if you're into that). Might I suggest the fake champagne?

Now you're good to go to terrify, depress, and hilariate your Halloween companions as perhaps the most depressing and weird clown in the world.

Let's imagine a world in which the Donald realizes what a jerk he's been and decides to have a change of heart. But he feels so bad that he just can't stop beating himself up about it. Well luckily, there exist in the world many Donald Trump pinatas, so we can create exactly this scenario for Halloween. To successfully pull off this costume, you will need:

First and foremost, you need a Trump pinata. Preferably a medium or large one, because you're going to use its head as a mask. There are some good Trumpinatas available on eBay. Once you have the pinata, I'm afraid you're going to need to chop off its head, cut holes in the eyes and mouth, and pop it on your own head. Nobody said this wouldn't be super creepy!

Like for the sad clown, you'll also want a suit. Pull one from your closet, or purchase one from a thrift store or from a costume shop.

For the final touch, a baseball bat that you will whack yourself with all night (gently!).

I kinda feel like Trump would be one of the first to get turned in the event of a zombie apocalypse. He'd just try to yell at all the zombies instead of doing anything, and would totally get bitten right away. For this costume, you will need:

Start with a suit, like for the previous two costumes. Since it's the zombie apocalypse, where everyone always has tattered clothes, slice some holes and tears into the suit, and maybe even take it outside and press it in the mud so it looks really dirty. Zombies are never clean!

You will also need a zombie makeup kit, like this one from Amazon:

And of course, the cherry on top will be the wig. Purchase a Trump wig, then go to town dyeing portions of it red to look bloodstained. You can also try hacking off chunks of the coiff to make it seem a little more apocalypse-esque. This wig from Toynk is a winner.

Donald Trump fired. Literally. To pull of this look, you will need:

You'll want to start with a standard black blazer. Again, Trump always wears a suit, and since the other portions of the outfit won't follow that pattern, we need to make it happen with the blazer. If you procure a blazer that you want to use specifically for this costume, you can go so far as to safely singe it with a controlled flame. Be SURE to check to make sure that you won't injure anyone or cause property damage by setting a mostly polyester garment aflame. Be careful.

To include as many flames as possible, get some pants that have a flame pattern on them. I think these lovely leggings should do the trick.

Next, of course, you will need a shirt with some flame action going. Yes, this garment is completely absurd, but it's all for the cause.

As for the hair, the same excellent wig from the Zombie Trump costume will work just fine.