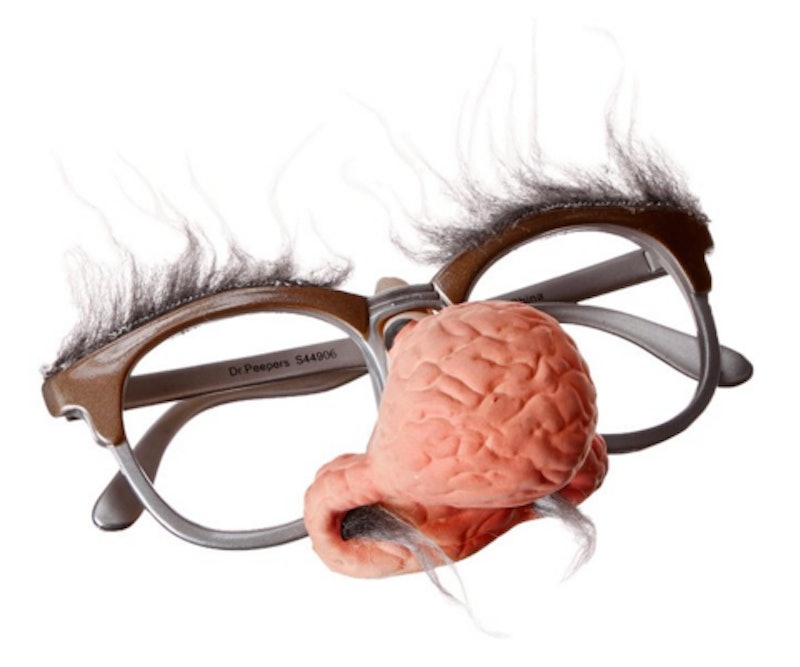 Are you ready for your baby to Feel the Bern this Halloween? If you've already got your Halloween costume planned out for yourself, take things to the next level by dressing up your baby, too. (And while you're at it, why not throw in a pet costume?) If you're going as one of the 2016 presidential hopefuls this year — or even if you're not — dressing your baby up as one of your competitors would be a hilarious and adorable addition to the look. Though creating a costume to make your baby look like a 74-year-old man isn't an easy feat, it's definitely worth it — a Bernie Sanders costume will have everyone cooing over your child.

Sure, you could dress your baby up as Donald Trump or Hillary Clinton, but there's something much cuter about making it into a vaguely Benjamin-Button-like, age-defying character. A baby with long white hair? It makes no sense! And if there's anything cuter than babies, it's babies dressed up as someone more than seven decades older than they are, right? So follow our guide to adding on the hottest Halloween accessory to your look this season.

The "Babies For Bernie" Look

Sure, your baby is nowhere close to voting age, but you know what's best for it, right? If you're a diehard Sanders 2016 supporter, deck your kids out in adorable Bernie Sanders onesies this Halloween and beyond. Sanders' official campaign store doesn't feature official Sanders onesies or baby clothes, but Amazon has plenty of options.

If you want to take things to the next level, though, you can make your baby more than a Sanders supporter. Dress your baby up as the senator himself, and all of your friends will be super jealous of your amazing parenting and DIY skills. You can vary the look you're going for, but all of them will need a Sanders-inspired wig. You probably won't be able to find one that's designed for babies and toddlers, but you can adjust an adult wig to fit your baby. If your child doesn't have hair to clip the wig to, ribbons or elastic are great for making adult wigs smaller. This white-haired wig from eBay is $16.49, but you could always save it for a future costume if you decide to dress up as, say, Albert Einstein.

Sanders isn't known for attacking his Democratic competitors the way some Republican presidential hopefuls have dinged each other. But the right wig and glasses can give even a baby an assertive, ready-to-argue look perfectly resemblant of the senator.

Step 1: Add a unique pair of glasses to the baby's Bernie wig.

Donald Trump seems to be the 2016 presidential contender with the most attention from mainstream Halloween costume stores, but you can find plenty of costume glasses that are perfect for a Bernie Sanders look. A larger pair of glasses will emphasize the costume's hilarity.

Step 2: Train your baby to raise his or her arm authoritatively. Lifting their arm just before you snap a photo works, too.

Much of Sanders' presidential campaign has been based around the fact that he is a regular American, and not a member of the one percent. Many of Sanders' speeches explain how he is relatable to everyday Americans, so if your baby is overly smiley and happy, this option is perfect.

Step 1: Add a smaller pair of glasses to the Bernie wig.

These smaller eyeglass frames resemble Sanders' everyday eyewear. And if they're too big on your baby's face, well, that's even more adorable.

Step 2: Put a smile on your baby's face!

Obviously, there's no way to make your baby smile continuously the entire night of Halloween. But a happy Sanders is better to relate with his constituents — or in this case, the guests at your Halloween party.

The eyebrows on these glasses are a cross between Groucho Marx glasses and Bernie Sanders', but with the right wig (and a well-placed Sanders pin), no one will mistake who your baby is supposed to be.

Step 1: Find the most outrageous white eyebrow costume glasses you can find.

The nose on this pair of glasses is a bit insulting to Sen. Sanders, though it definitely emphasizes the age absurdity of #BabiesForBernie. You could always cut the nose off of these glasses, or alternatively hot-glue a makeshift pair of white eyebrows to a pair of black costume glasses.

The bigger the tie looks on your baby, the better — we're going for a ridiculous costume here. Any blue or red patterned tie will do, so feel free to use something you already own. The key is getting the huge tie knot politicians seem to love.

If you're crunched for time and/or money this Halloween season, you can still turn your baby into a Bernie Sanders lookalike. A bit of white cardboard or laminated construction paper fashioned into a white wig and pair of glasses is all you need to make your baby Feel the Bern.

Bernie On The Brain

Your child may not be able to speak yet, but you can still show off his or her intelligence by showing everyone what they are thinking about this Halloween season. A well-placed Sanders 2016 sticker or Bernie Sanders baseball cap will let everyone know you're in on the #BabiesForBernie craze.