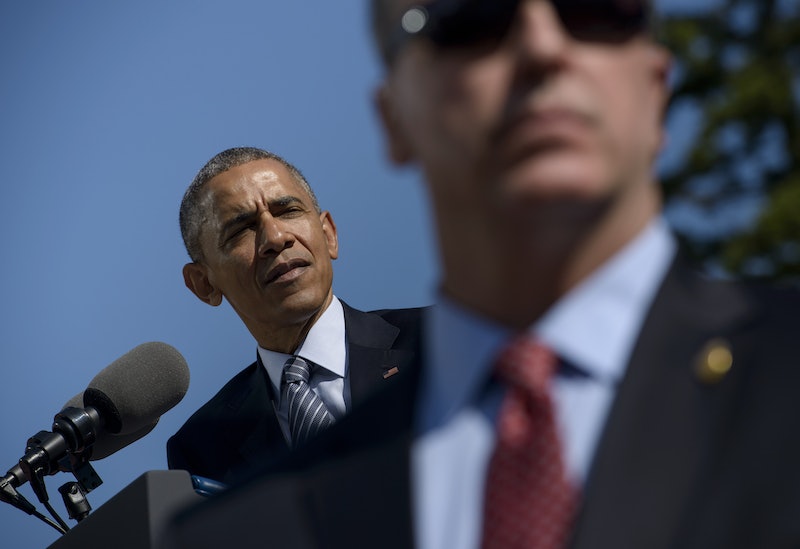 Up until the last GOP debate, most people probably never thought about the Secret Service or presidential codenames. But there are actually tons of fun facts about Secret Service codenames and they way they get assigned. Although they aren't always indicative of the person they're assigned to, codenames offer funny (and sometimes highly accurate) insights into their politicians.

And for the sake of political debates, they act as a fun, lighthearted icebreaker. During the most recent GOP debate, Republican candidates gave the nation about two weeks' worth of joke material when they were asked what their ideal codename would be. Some candidates had some good answers — Carly Fiorina wanted to be "Secretariat," and Donald Trump chose "Humble." But other candidates had straight-up awful choices, like Rand Paul, who chose "Justice Never Sleeps."

The Democratic candidates were asked the same question before Tuesday night's debate, and the nation learned that Martin O'Malley would want to be called "Eagle." Bernie Sanders responded with "Who knows?" signaling that he has way better things to do with his time than think up nicknames. And Lincoln Chafee gave Paul a run for his money in terms of the worst codename, opting for "Shoes." Clinton and Webb didn't answer.

But aside from providing humorous debate filler, codenames (and the people they're assigned to) have a pretty interesting and colorful history.

Harry Truman Had The First Codename

During his presidency, Harry Truman received the first presidential Secret Service codename: "General." Which is kind of funny, considering that prior to becoming president, he only reached the military rank of captain.

The Secret Service Doesn't Assign Them

Way back when, codenames might have been chosen by the Secret Service, but not anymore. Today, codenames aren't very secret, and have nothing to do with security. Instead, codenames are selected because they are quicker to say, and are generally easy to pronounce and hear. Currently, the names are chosen by the White House Communications Agency. Upon being elected, the president is given a list of approved words, and can choose their codename from there.

After the president gets a codename, the rest of the family follows suit — and they're almost always alliterative. For example, President Obama has one of the coolest codenames ever: "Renegade." Michelle Obama is "Renaissance," while Malia and Sasha are "Radiance" and "Rosebud," respectively.

Sometimes They Are Pretty Terrible

Al Gore's daughter Kareena chose "Smurfette" as her codename, while Bill Clinton's brother Roger was known as "Headache." And before being elected president, George W. Bush's codename was Tumbler — a remnant from when his father was in office. Once he was sworn in, he changed it to "Trailblazer." Hillary Clinton's Secret Service name during her time as first lady was "Evergreen," which she should definitely change, because it sounds like a cleaning detergent.

Sorry O'Malley — "Eagle" has already been used, and by none other than President Bill Clinton. I'd say the former Maryland governor could go back to his Irish roots and pick another codename, but Joe Biden is currently using "Celtic."

All Press Secretaries Have The Same Codename

Apparently, everyone but the White House press secretary gets a cool new nickname. According to Scott McClellan, the press secretary under George W. Bush, he and everyone before him was known as "Matrix." Which honestly makes Josh Earnest seem a lot cooler.

Non-Politicians Can Get Codenames, Too

If you're a celebrity who comes in regular contact with the president, then you too can have a Secret Service nickname. During the Kennedy administration, Frank Sinatra was known as "Napoleon." Pope John Paul II went by "Halo." And Antonio Banderas got the best codename ever: "Zorro."

Maybe, for the sake of fairness, they should give the Republican candidates another shot at picking out their codenames. Or at least ask Paul to narrow it down a little. There's a long legacy to uphold when it comes to getting a good name — and we wouldn't want them to throw that away.