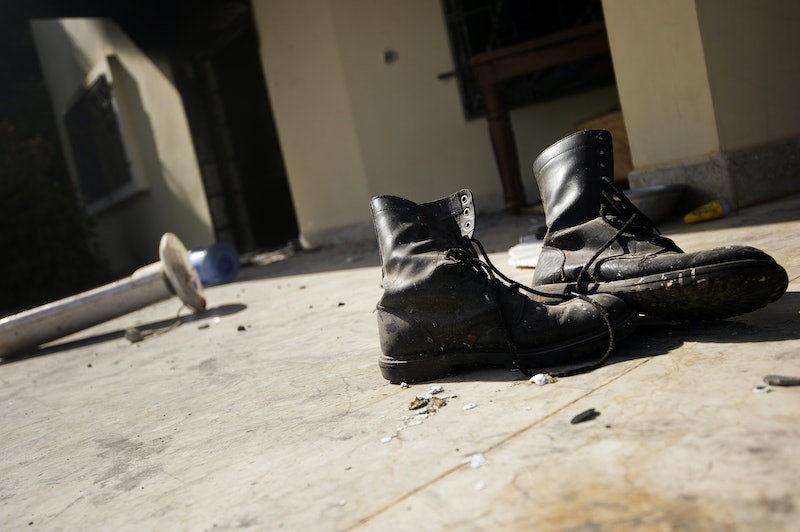 Michael Bay has a new action movie coming out in January, but it's no Transformers. Called 13 Hours: The Secret Soldiers of Benghazi , the movie tells the story of the September 11, 2012 attacks on the American embassy and CIA compound in Benghazi, Libya. Islamic militants injured at least 10 Americans and killed four: U.S. ambassador to Libya, J. Christopher Stevens, a State Department foreign service officer named Sean Smith, and CIA contractors Tyrone S. Woods and Glen Doherty. Bay's new blockbuster, which is based on a book written about the attacks, will focus on the perspective of those who were there, as opposed to much of the media coverage and political debate since the attacks, which have focused on placing the blame on someone back home.

A trailer for the movie portrays it as the story of six security team members who try to save as many Americans as possible in the attack. According to anonymous reports, the action and dialogue adhere closely to the book it's all based on, called 13 Hours: The Inside Account of What Really Happened in Benghazi, written by Mitchell Zuckoff. The movie will star John Krasinski as Jake Silva, a CIA contractor who survived the attack.

13 Hours is set to come out in January 2016. December and January are becoming popular months for action-packed patriotic movies. The widely successful American Sniper came out in December 2014, and carried its success well into 2015. It's very possible that 13 Hours will be 2016's American Sniper.

Additionally, the timing may or may not be strategic for politicians. The movie will hit theaters just ahead of the ever-important Iowa caucuses, which Hillary Clinton no doubt wants to win for the Democratic Party. Although the movie reportedly makes no reference to any particular public officials, it's possible that the movie could reignite the controversy over Benghazi that Clinton has tried tirelessly to put out. She has received significant criticism about her attempts — or lack thereof — to protect American diplomats in Benghazi.

While the security and safety of American officials abroad certainly merits discussion and investigation, it's important to keep in mind that the story of 13 Hours should be more than a political tool. It tells the story of real Americans, and it should do for those Americans and their peers what American Sniper did for veterans like Chris Kyle: celebrate and honor them. Hopefully, by focusing on the firsthand perspective of the action rather than the debate back home, 13 Hours will send a powerful message without becoming a tool for winning votes.