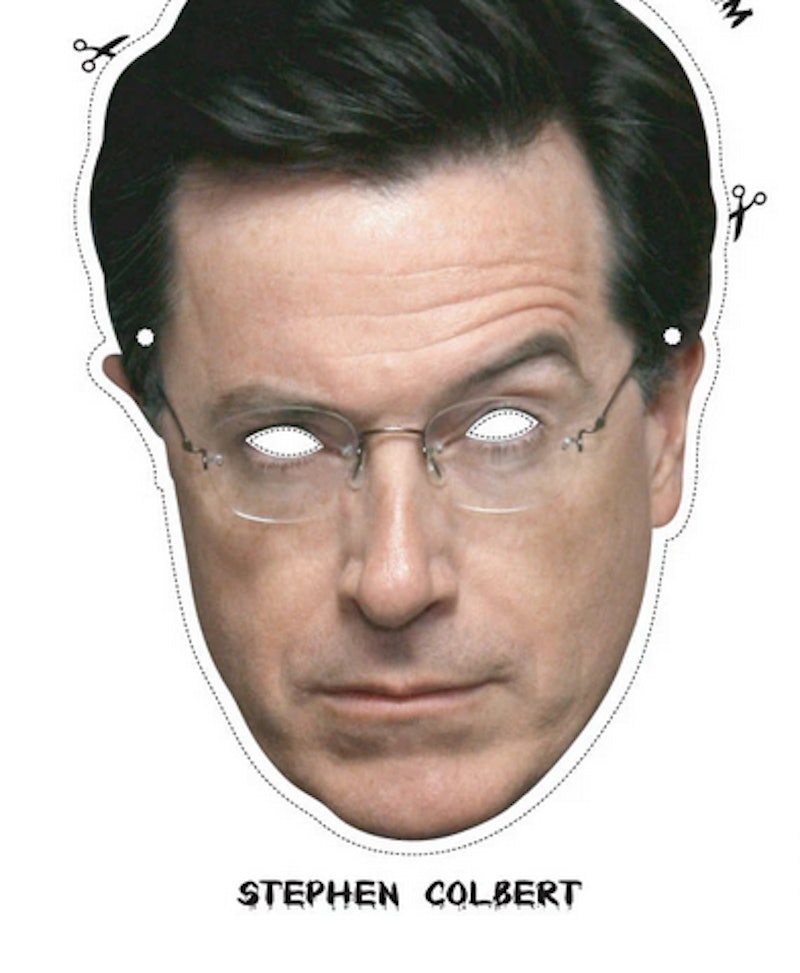 Halloween is right around the corner, you're in desperate need of a witty (and easy) political costume, and you're freaking out. But there's no need to, because there's an easy Stephen Colbert Halloween costume which takes like five minutes to put together. How can you get any wittier than one of the funniest political commentators ever? Sure, he left his gig at The Colbert Report behind, but since starting his new job at The Late Show, he's quickly proven that his political chops aren't going to be forgotten.

It's a trendy costume, too, since Colbert is definitely "in" right now. He's fresh on the network scene and giving Jimmy Fallon a run for his money, and we are all still talking about his emotional and amazing interview with Joe Biden during his first week. So Colbert will be a lot more timely than the Sarah Palin costume that you're contemplating reprising from four years ago.

And, objectively speaking, you'll have one of the most adorable costumes there, because no one will ever convince me that Colbert isn't the cutest TV anchor ever. When he geeks out about politics or cracks himself up, it's like watching a puppy anchor a late night TV show. Honestly, it's basically the same thing. And since he's basically just a white dude in a suit, this costume couldn't be easier.

Step 1: If you are looking for the easiest costume possible, then go with a Colbert mask. Forbes has a huge database of printable masks, including one for Colbert that is only mildly creepy. Print this sucker out, cut around the edges, and you're golden.

Step 2: If you aren't a fan of creepy masks, don't worry. Your natural face can do the trick. For guys, all you need to do is comb your hair over with some gel. For the ladies, depending on your hair, you can do the same, or you might want to take advantage of a black wig.

Step 3: You can't be Colbert without the glasses. If you're looking for an old-school Colbert Report vibe, go with clear frames. But if you want to emulate the newer, "edgier" Colbert, be sure to grab some black plastic frames. If you aren't visually impaired and don't already have glasses, no worries — you can find fake frames pretty much anywhere for cheap.

Step 1: Finding a gray or black suit will be pretty easy. If you have some extra cash and don't feel like swimming in your father's old work suit that you borrowed, you can buy a standard black suit that will do the trick, like the one below.

Step 2: You can't be Colbert without a tie! Once again, the easiest route is to steal a tie from a friend, because someone in your life has to have a necktie. But if you're in a pinch and don't have time to go raid their closet, you can get ties on the cheap as well.

Flag Pin: Colbert is a political junkie, which means that he's going to be showing off his love for America. Sure, people might think you're a politician, but what's the harm? You can correct them pretty easily. But indicate your political prowess with a flag pin like the one below.

Lord Of The Rings Reference: In case you missed the week where Colbert went all-out on the Colbert Report to celebrate The Hobbit, he is a giant nerd when it comes to The Lord of the Rings.You don't need to be able to recite every character ever in order to get into your Colbert costume, but you should have something on hand to indicate his dorkiness. I recommend a replica of the one ring, or maybe a little Gandalf action figure. If you're crunched for time, just carry around a copy of The Fellowship of the Ring, and you'll have the added benefit of having something to do if Halloween gets boring.

Even if you don't have time to buy a wig or accessories, a good Colbert costume is pretty easy to pull together. All that matters is that you sell the costume, and have a big smile all night — and more than a few political jokes.