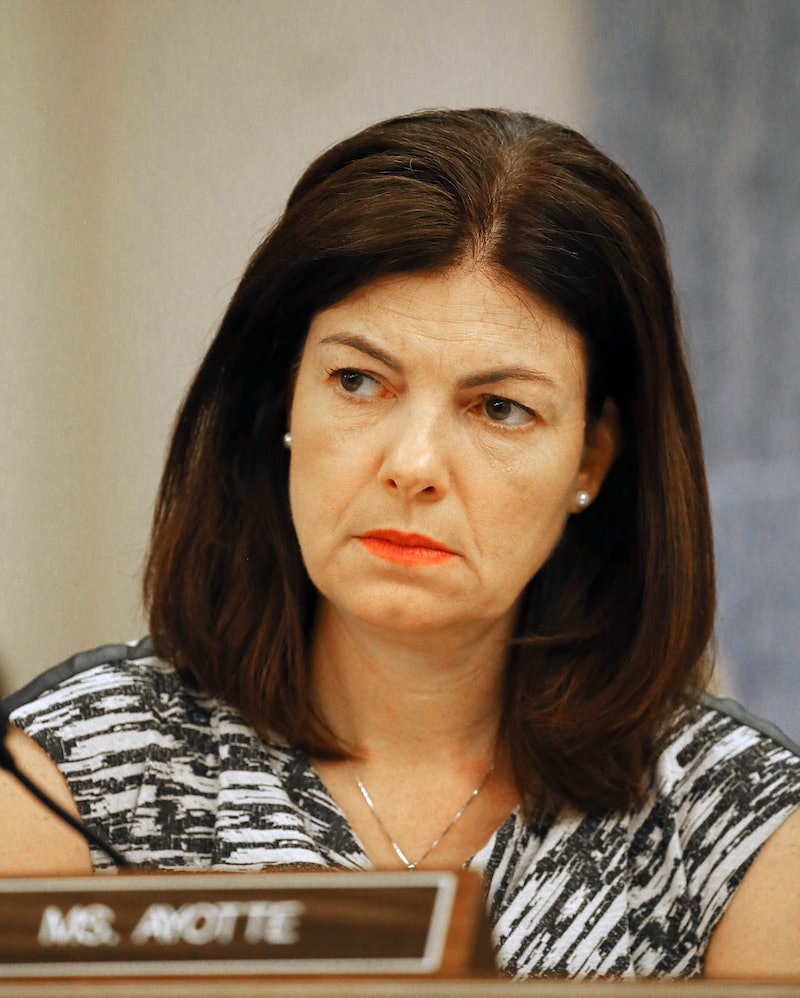 A Republican politician may not be the first person you think of when it comes to women's rights, but an advocacy group backed by Karl Rove wants to change that. One Nation recently released an ad supporting New Hampshire Sen. Kelly Ayotte's 2016 Senate bid, and the ad claims that Ayotte has a proven "record" on women's healthcare. But according to EMILY's List, a PAC that supports pro-choice Democratic women, Ayotte's record on women's issues is decidedly less than stellar. So what is Ayotte's record on women's rights?

It's worth noting that earlier this month, EMILY's List endorsed Democrat Maggie Hassan for Senate, who is running to replace Ayotte in New Hampshire. An EMILY's List press release claims "extreme Republicans depend on Kelly Ayotte to advance their failed agenda," while Hassan "is a tireless champion for New Hampshire women and families." EMILY's List's endorsement announcement also praises Hassan for her pro-choice beliefs.

So what has Ayotte done to make feminists so critical of her next Senate campaign? Earlier this month, Ayotte told Dover, New Hampshire, newspaper Foster's Daily Democrat that working parents shouldn't be "so hard" on themselves — a suggestion that some feminists find ironic, because in 2013, Ayotte introduced the Family Friendly and Workplace Flexibility Act, with Republican Sen. Mitch McConnell. The bill would allow for compensatory time and flexible credit hour agreements for hourly workers, but workers would have to choose between paid time off and overtime work. Ayotte and McConnell introduced the bill at the same time Republican Utah Sen. Mike Lee introduced a complementary bill, the failed Working Families Flexibility Act, which would have taken overtime pay benefits away from working parents in exchange for paid leave time.

Ayotte and McConnell reintroduced the Family Friendly and Workplace Flexibility Act this past March, with Ayotte saying in a statement that the bill "would allow greater flexibility for workers who are looking to better balance their work-life demands." According to Ayotte's statement, the bill would help those "who do not get the opportunity to work overtime" to instead choose paid leave time, but its opponents say that hourly private-sector employees shouldn't be forced to make that decision. The new bill has been assigned to the Committee on Health, Education, Labor, and Pensions but has not passed either the Senate or the House.

Ayotte was one of many Republicans who sponsored either of the two bills in 2013 — several 2016 presidential hopefuls, including Paul, Cruz, and Rubio, co-sponsored the Working Families Flexibility Act. And activist groups like EMILY's List disapprove of those senators' actions just as much as they do Ayotte's — but as a woman who's applauding her own record on these issues, Ayotte is under extra scrutiny from the general public.

Ayotte's other actions on women's rights are similarly dismal, if not surprising. Ayotte has expressed her support for defunding Planned Parenthood in the past, though she also criticized her fellow Republicans last month for attempting to pass a bill that was destined to fail and could have caused a government shutdown. Ayotte also co-sponsored the failed Blunt Amendment, which would have allowed corporations to refuse to provide birth control health coverage for their employees. Still, Ayotte hasn't done anything for women's issues that most other Republicans wouldn't have done — Carly Fiorina, a GOP presidential hopeful, is also anti-choice.

For progressive women, it's frustrating to see high-profile figures like Fiorina and Ayotte promoting policies that seem to be anti-women or anti-equality. But female politicians also carry the burden of reconciling identity politics with their party's politics. Ayotte's views may be disappointing, but they aren't surprising. Placing excessive scrutiny on Republican women for aligning themselves with their party's beliefs won't change anything.