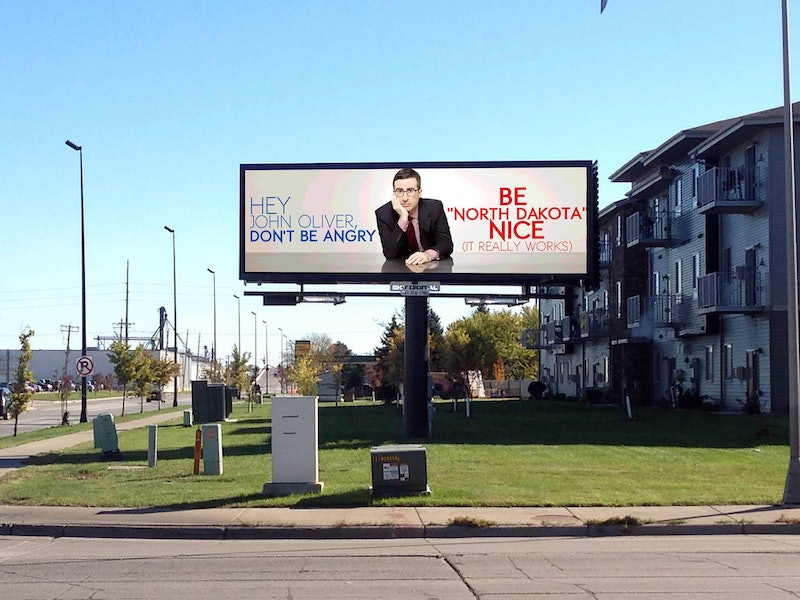 North Dakota has fired back against John Oliver. Graphics firm Sky Digital Advertising used its own billboards to issue a statement to the Last Week Tonight host following his segment on the negative effects of the state's oil boom. The billboard message appeared mere days after the comedian used a similar tactic, purchasing ad space and running "Be Angry! (Please)" on billboards. It now appears as if North Dakota is feuding with John Oliver, albeit in a friendly way.

Sky Digital Marketing's brief campaign in Fargo only lasted an hour, but gained major traction over social media. The billboard they issued shows Oliver with his head propped up by his left hand in the center, looking rather forlorn. The words "Hey John Oliver, don't be angry" are on the left, while "Be 'North Dakota' nice (it really works)" are on the right. While some in the state took the message as simply a bit of friendly ribbing, others were actually angry that Sky Digital Marketing had missed the point of Oliver's message, which called for systemic change to an industry that has both helped North Dakota's economy and deeply hurt its citizens. This prompted Sky Digital Advertising Sales Manager Paul Hilt to issue a statement of clarification over Twitter, defending the company and stating that no oil companies had signed on for ad space, nor had any paid for the billboard.

Oliver's 20-minute segment on the state details the detrimental effects of drilling the Bakken Formation in northwest North Dakota. Though there are plenty of environmental factors at play, the comedian primarily focused on the loss of funds as well as human life for those working on the ground. According to Oliver, oil companies simply don't have the incentive to change, and North Dakota's own self-proclaimed business-friendly government may be to blame. Fines for oil spills and misconduct are typically just 10 percent of an issued penalty. The host also cites a case in which an oil company wasn't held liable in the death of an employee, simply because it used subcontractors rather than full-time employees to work its fields.

As of Wednesday evening, Oliver has yet to respond to the billboard campaign or Hilt's statements. The comedian will undoubtedly side with those on social media who think that Sky Digital Advertising simply missed the point of the segment. Being nice isn't necessarily a problem. The generosity that North Dakota has shown the oil industry is less a matter of friendliness and more a problematic business model. With little oversight — Oliver says that federal workers safety agency Occupational Safety and Health Administration has just eight employees to cover both North and South Dakota — and a complete lack of an ethics committee, North Dakota appears more complacent than kind. The whole state is at risk of environmental disaster, and that is definitely something to be angry about.

More like this
Chris Kaba's Family Continue Fight For Justice After Viewing Police Bodycam Footage
By Sophie McEvoy
Black History Month UK’s 2022 Theme Calls For Action, Not Words
By Maxine Harrison
Mel B Speaks Out Against Domestic Violence In A Powerful Speech
By Sophie McEvoy
The Future Of BBC’s ‘Inside Man’ Is As Unclear As The Ending
By Sophie McEvoy
Get Even More From Bustle — Sign Up For The Newsletter