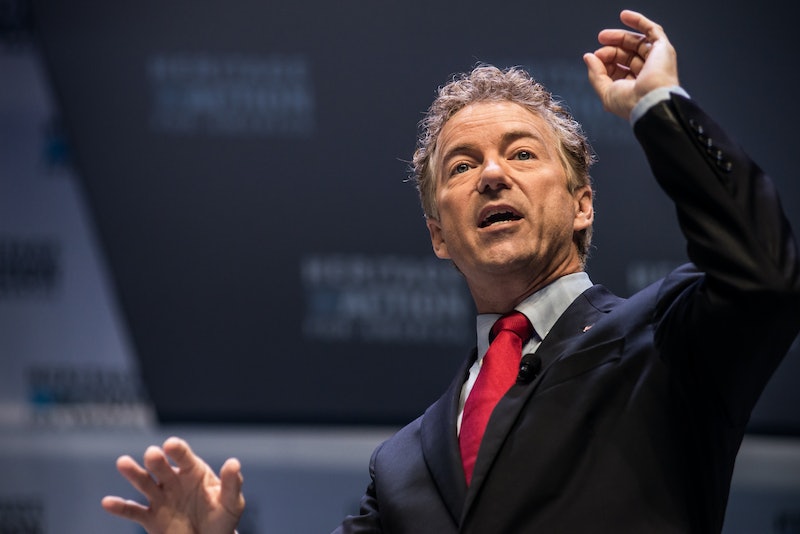 Some things should go without saying. Others should just go without ever being said. Whether they're offensive, inaccurate, or just plain strange, the weirdest, most unbelievable things that politicians have said definitely fall into the latter category.

Does Rand Paul really expect us to believe that health care is like slavery? Why is Donald Trump so concerned with Robert Pattinson's love life? Sometimes, it seems like politicians are just reaching for shock value, but there's a fine line between being relevant and going too far. It's not just the current candidates who say strange things, either. After all, Sarah Palin thought she was too good for the Ice Bucket Challenge, and Harry Reid thinks seniors need junk mail to stay social — and these are just the high-profile examples.

No matter what side of the aisle they sit on or what level of government they work at, politicians say the darnedest things. And thanks to social media and the Internet (which, by the way, Al Gore would like us to thank him for), the quotes they probably shouldn't have ever said in the first place live on and on. But at least we have Saturday Night Live to make fun of them.

With regard to the idea of whether you have a right to health care, you have to realize what that implies. It’s not an abstraction. I’m a physician. That means you have a right to come to my house and conscript me. It means you believe in slavery. It means that you’re going to enslave not only me, but the janitor at my hospital, the person who cleans my office, the assistants who work in my office, the nurses.

Current candidate Paul compared universal health care to slavery during a Senate subcommittee hearing back in 2011. During the same rant, he also compared a right to health care with a right to plumbing, implying that Americans have neither. Good to know, Rand, good to know.

From the womb to the tomb, Madam Speaker, the Internal Rectal Service is one big enema.

A Democratic member of the House of Representatives for nearly 20 years, Traficant made quite a name — or rather, voice — for himself before he passed away in 2014. In 2001, he actually said the words "Internal Rectal Service" in an official, political setting. For the record, he was talking about the Internal Revenue Service.

When Trump said he wanted to make America great again, I doubt we all realized he even meant our love lives. Trump isn't known for normal comments, but this one in particular stands out because it seemingly has nothing to do with him or his business. Also, he wasn't a candidate for president yet, so appealing to young voters through Twilight cannot be an excuse.

During my service in the United States Congress, I took the initiative in creating the Internet.

Gingivitis has been eroding the gum line of this great nation long enough. It must be stopped. For too long, this country has been suffering a great moral decay in spirit and incisors. Our country's future depends on its ability to bite back.

Supreme is the presidential candidate you never knew you had. He looks a little like Dumbledore, a little like a homeless person — and he speaks in metaphors that we Muggles will never understand. On the other, hand, he has also said that he wants to give all Americans a free pony, so he can't be all that bad, right?

Seniors love getting junk mail. It's sometimes their only way of communicating or feeling like they're part of the real world.

While in the Senate, Reid tried to defend the U.S. postal service with this rationale. He also said that although some people call it junk mail, it's very important to the people who are sending it. This is why no one watches C-SPAN.

At this stage of my life, in my career, aren't I a little too prim and proper for all that ice bucket water dumping?

Palin apparently didn't like the idea of participating in the ALS Ice Bucket Challenge in 2014. She opted instead to drink a glass of Diet Dr. Pepper as her contribution to the campaign. It technically wasn't a complete cop out, though, since she did write a check — and at the end of the video, someone came in and dumped water on her anyway.

Politicians are easily some of the most quotable people in the country. Sometimes they say the feel-good, inspirational stuff voters want to hear. Other times, they go off-the-cuff or try too hard, and that's when things can get weird.