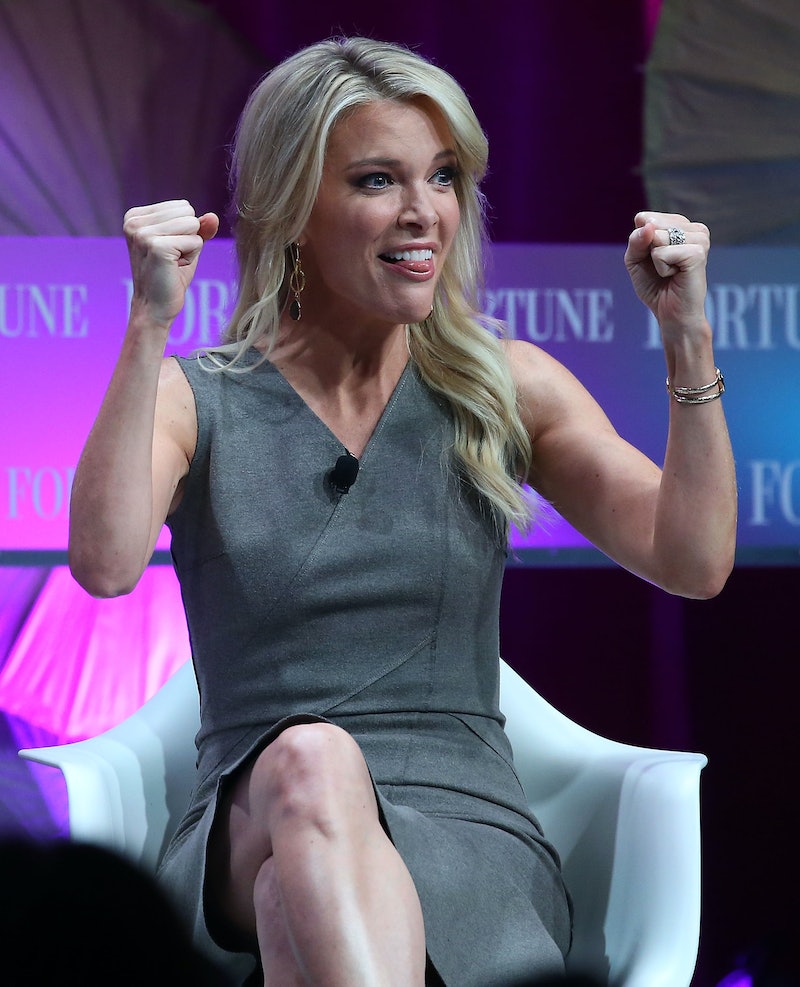 So far, Halloween 2015 has seen no shortage of offensive costumes, from unfortunate Caitlyn Jenners to sets of Cecil the Lion and Dr. Walter Palmer. But a Halloween costume of Megyn Kelly adorned in a bloody tampon arguably takes the cake. The costume is a reference to Donald Trump's bizarre, misogynistic temper tantrum against Kelly after she dared to call him out on his long history of sexist, degrading comments at the first GOP primary debate in August.

In case you've managed to forget the great political feud of two months past: In a nationally televised CNN interview, Trump insinuated that Kelly had been menstruating during the debate, following his logic that a woman acting unreasonable enough to call him out on his gross misogyny and intemperate nature must have naturally been on her period. Trump's GOP rivals, being the passionate feminists that they are, quickly proceeded to reprimand him. But as this Halloween costume reveals, the charm of Trump's crude misogyny wasn't lost on everyone.

To some, perhaps the terribly offensive Kelly costume could be written off as a clumsy attempt at humor. But to a feminist like you, the costume's comedic spin on the already deeply stigmatized issue of menstruation and the emotional states of women, as well as its alarming disrespect for Kelly, render it unwearable. Which is, naturally, a little disappointing if you were otherwise interested in dressing as Kelly for Halloween. If this is the case, fear not: Here's a guide to get Kelly's look without promoting misogyny this Halloween.

Before you determine which specific, iconic Megyn Kelly outfit works best for you, make sure to stock up on an appropriate blonde wig and the hair product essentials you'll need to perfectly capture her characteristic 'do.

For the reasonable price of $17, this wig manages to capture the dirty blonde color of Kelly's hair, as well as its thick, wavy nature. Its length also enables you to experiment with different styles the Kelly File host has pulled off, before. However, if you opt to wear the wig loose, cut it to just past your shoulders and invest in an effective curler to really lock in Kelly's signature curls.

Earlier this year, Kelly landed the cover of Variety magazine in a chic, fitted black pencil dress, pointed heels, and a stylish cuff bracelet. Here's how to capture the look yourself.

This dress might not be a carbon copy of Kelly's, but paired with a wig and the right accessories, there will be no mistaking who you are that night.

The low heel and pointed toe style almost perfectly reflect Kelly's own choice of shoe in her Variety cover, and could also serve to complete a business casual look.

Kelly arguably pulls off chic simplicity in her Variety cover outfit by selecting only one accessory. So minimize your own usage of accessories, and complete this look with this 25 mm silver cuff by Dreamtime Creations.

A Copy Of The Magazine

Now, this last part is optional, but the only way to guarantee that no one makes the mistake of thinking you're simply going to the office with a chic blonde wig is to purchase and carry a copy of the magazine with you at all times. If you'd like, you could also DIY a sign that reads "I'm An Independent" and wear it for the night.

In a 2012 interview with The Los Angeles Times, Kelly confessed that prior to her career in journalism, as a lawyer, fashion wasn't exactly her forte. She revealed her strong preference for neutral colors, and her particular taste for navy. "I like black, white and navy. I think navy looks good with blond hair and dark blue eyes," Kelly explained. Frankly, there's no better way to master Kelly's look for the evening than to take her own advice. And again, carrying around Kelly's Variety magazine cover won't hurt your costume, either.

While this navy blazer could serve as your costume for an evening, it could also serve as your go-to for business casual functions in the future.

Opt for class and comfort to both stay true to your Kelly costume and enjoy a fun Halloween night on the town with these low platform suede heels.

Kelly moderated the first GOP primary debate in August with the dynamic performance that nobly earned her The Donald's spite. Instead of commemorating her performance with the crude, disrespectful tampon costume, recreate it by assembling her stylish outfit from that evening.

Find the dress above, or opt for any black dress with a high neckline and short, ruffled sleeves.

Any beige or cream-colored heels should do the trick, but if you're in need, this pair by Nine West will complete not only your Halloween look, but nearly any business casual or formal outfit.

From The Karl Rove Correction

Back in November 2012, the reelection of President Obama was a bit too much for former White House Deputy Chief of Staff Karl Rove to handle. Kelly challenged Rove's projection that Mitt Romney took Ohio, asking him if he was doing his math "as a Republican to make himself feel better, or is this real?" November 2012 election coverage on Fox News altogether made for a cringe-worthy evening, but there was nothing cringe-worthy about the outfit Kelly donned for the iconic interview.

Any white blazer will work for this costume, but if you don't have one to spare, the one above is available here. Get Kelly's look by buttoning it about halfway down your torso.

Really, any casual black dress with a V-neck line will suffice.

From The Kelly File

In a promotional poster celebrating the second anniversary of her show, Kelly posed in a bright blue dress that you could easily shape your costume around.

Sure, this dress is no carbon copy of the one Kelly is wearing, but as long as you follow the next step in preparing the costume, expect some instant recognition.

All you'll need is a blank poster board, string, hole puncher, and some black and blue markers. On the poster, write: "TWO YEARS AND GOING STRONG THANKS TO OUR LOYAL KELLY FILE VIEWERS." Punch holes at the top of the sign, attach string, and neatly hang the sign from your neck.

Back in April, Kelly appeared at The Hollywood Reporter's 35 Most Powerful People in New York Media party in a glamorous outfit that sharply contrasted with her usual on The Kelly File. Regardless, if you sport a similar black jumper and clutch, you could easily be recognized as Kelly.

Available at Revolve, this jumper matches Kelly's almost exactly, and post-Halloween, it could serve as a fun outfit for a night out.

Don't forget to top your costume off with the perfect gold clutch purse — Kelly certainly didn't!

Really any gold high-heeled sandals will complete the glam Kelly look, but if you were thinking about investing in a new pair anyway, these Steve Madden's will tie the look together.

Finally, after you've selected any of the above costumes, it's time to complete your costume. All it will take is some cardboard or poster board, and black and blue markers.