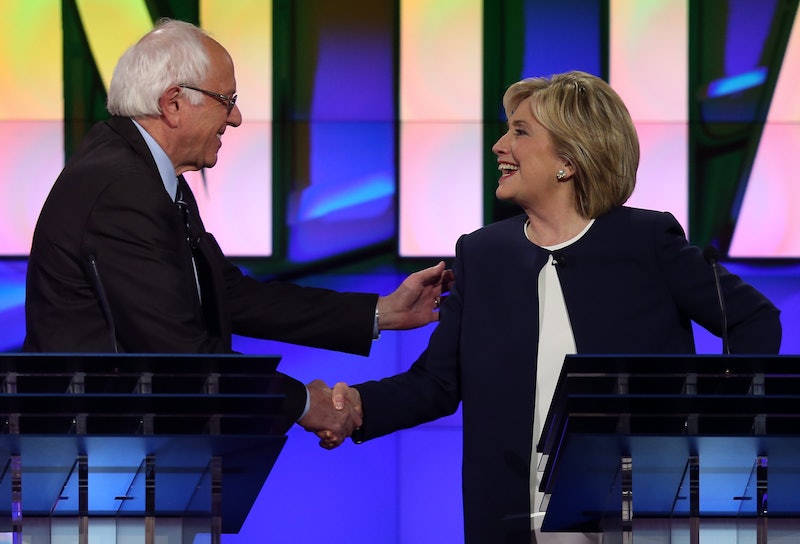 Former Secretary of State Hillary Clinton shocked viewers during Tuesday evening's debate among Democratic presidential hopefuls when she issued a sharp criticism of Vermont Sen. Bernie Sanders' views on gun control. Clinton said that Sanders is "not at all" tough on gun control, which was surprising, since the pair hasn't attacked each other much on the campaign trail as of yet. Clinton and Sanders have a long-standing working relationship, and despite Clinton's comments on gun control, the pair agree on many issues. So what exactly would a Clinton/Sanders ticket look like? Let's examine the candidates' similarities and differences, in case they eventually become running mates.

In a recent interview with Katie Couric, Sanders said that he wasn't running to be Clinton's vice president, and he jokingly asked if Clinton would be "interested" in being his vice president. Of course, neither candidate is going to address the possibility of being VP at this point — both Clinton and Sanders are in it to win — but eventually, only one person will gain the Democratic primary nomination, and that candidate will need to choose a running mate. Here's what to expect if Clinton and Sanders eventually run together in 2016.

Clinton was the only candidate to mention Planned Parenthood during Tuesday's debate, and she criticized Republicans for having a double standard about "big government" when it comes to reproductive rights. Sanders also supports funding for Planned Parenthood, as well as access to birth control and abortion.

2. They'd Cut Through The Fluff And Get To The Issues

Sanders made everyone laugh at the Democratic debate when he said to Clinton that "the American people are sick of hearing about your damn emails." That statement, along with Sanders' commitment to helping real Americans, and not just the rich, showed that Sanders is serious about effecting change in the United States. And we're sure Clinton is just as eager to put her use of a private email server — and the Monica Lewinsky scandal — behind her and move the hell on with her life.

While Clinton and Sanders may seem like an odd pair, having both of them on the ticket would allow for greater perspectives in discussion of various issues. Clinton is a Washington insider who's served as first lady of the United States; Sanders is more theoretical and is a strong advocate for political outsiders. The two certainly wouldn't agree on everything, but it would be handy to have each other around to discuss pros and cons when making decisions.

Both Sanders and Clinton spoke about free college on Tuesday during the Democratic debate, to the chagrin of their Republican counterparts. Clinton said that students should work during college to offset costs, while Sanders said the tuition should be completely free. In the bigger scheme of things, though, that's not a big difference, considering they both want college tuition to be free in the first place.

President Barack Obama and Vice President Joe Biden have set a pretty high bar in terms of White House friendship #goals, but if there's any pair who can follow in their footsteps, it's Clinton and Sanders. Can't you just imagine the two of them drinking scotch in the Oval Office and laughing about Clinton's "damn emails?"