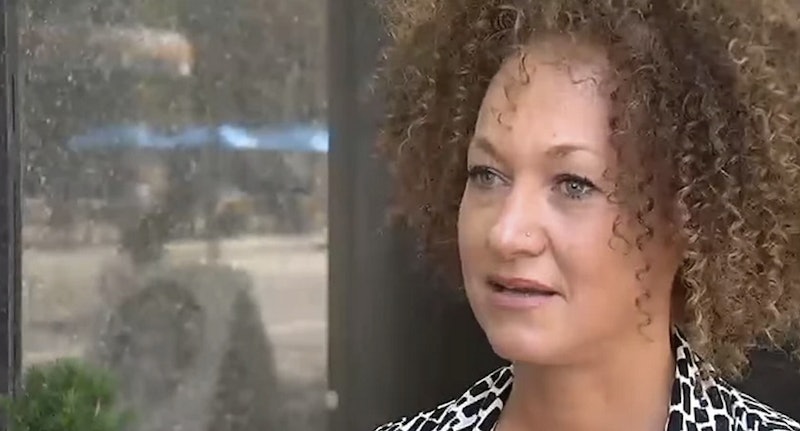 At its most superficial, Halloween is a joyous occasion of costuming, eating candy, and watching horror films with a purpose. The holiday is a celebration for children and adults alike. Even if you're no longer trick or treating, there are still plenty of ways to be festive, especially when it comes to playing a bit of creative dress up. Deciding on a Rachel Dolezal costume for Halloween really isn't one of those ways. There are so many more clever costumes out there that play on the news du jour without doing so in an insensitive way. Think 2016 election candidate costumes and their many off-shoots, like zombie Donald Trump.

Dolezal remains a controversial figure, even after public outcry has died down since her parents "outed" her in June for being a white woman trying to pass as black. The former Spokane NAACP head has lost friends and family over the revelation, as well as her position with the civil rights group and a position on the Spokane police oversight commission. Following the news, her contract was not renewed at Eastern Washington University, where she had previously been a part-time professor teaching Africana studies. Even Dolezal herself has said that race is not a costume. Thus, it's a really terrible decision to dress up as such a racially polarizing figure. Nonetheless, already there have been attempts.

Former Fashion Police host Kelly Osbourne may have led the charge mere days after news of Dolezal had reached national prominence. Donning a wig and a black blazer, Osbourne took to Instagram to post a photo of the outfit, captioning it with the hashtags "#CallMeRachel" and "#MyCasualLook." There is nothing casual about mocking a figure whose strained cultural identity has negatively impacted those of us who struggle with "passing." Social media as well as various websites, including College Candy and News Talk Florida, have already condemned the costume idea, albeit with a humorous tone. College Candy calls the costume idea "confusing," while News Talk Florida cited the costume's impracticality as being one of its major flaws.

Dolezal has since faded from the public spotlight, only recently being mentioned by Rihanna in an interview with Vanity Fair, in which the R&B songstress called her "a bit of a hero." Rihanna's comments have been met with frustration from fans of all races. Likewise, Osbourne received massive backlash for her Instagram photo and has alienated fans by failing to issue an apology or address the controversial costume. No matter your own ethnicity, or how you may personally view Dolezal as a person, choosing to dress up as her for Halloween is an unnecessary risk that simply shouldn't be taken.