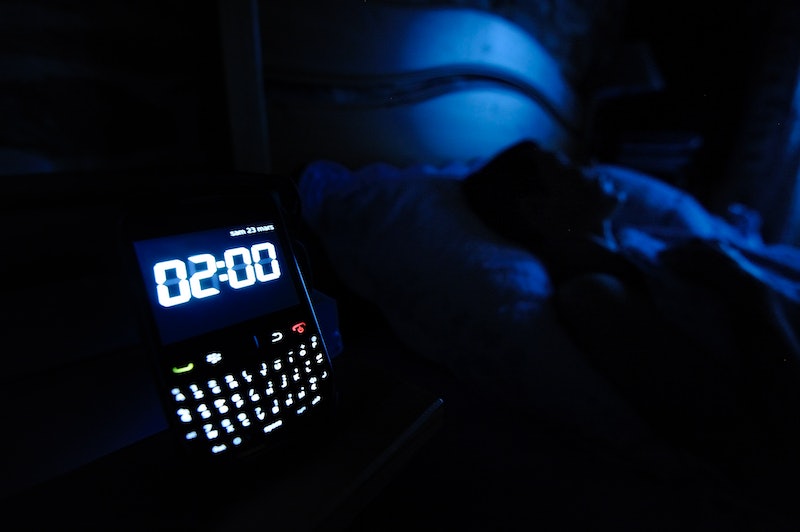 The time just before bed can be some of the most relaxing moments you have in a day. It can also be the most harrowing. Frequently, sleep disorders with frightening symptoms rear their heads just as you're drifting off to sleep, or as you're waking up. The 10 scariest things to happen during your sleep range from common problems like sleepwalking to disorders that will wake you abruptly and may throw off your entire routine, like night terrors. Even worse, they can occur at any age, and impact your mental as well as physical health.

The most common sleep disorders are marked by the inability to sleep. According to Fast Company, insomnia affects nearly a third of Americans. The disorder renders a good night's rest nearly impossible, leading to further health complications that may result in a higher risk of developing Alzheimer's. No cycle of sleep is safe from issues, however. Even in REM, a sleep behavior disorder may compel you to act out aggressively, shouting expletives as you do so. Though many sleep disorders can be treated in some capacity, scientists are still trying to figure out why we sleep in the first place. Thus, even a good night's rest remains a mystery.

If the name itself doesn't startle you, the symptoms will. Exploding Head Syndrome is named for the loud, abrasive noise sufferers of the disorder experience just as they're drifting off to sleep. According to the American Sleep Association, the sound is typically described as that of cymbals clashing or a bomb detonating and, at its worst, is accompanied by shortness of breath and an elevated heart rate.

Sleep paralysis is so legendarily scary that it's been documented in mythology and in art as haunting succubi and incubuses, as in this Fritz Schwimbeck piece, titled My Dream, My Bad Dream. Instances commonly occur just before falling asleep and waking up. Though you may feel mentally awake, sleep paralysis prevents you from speaking or moving, and can last agonizing minutes.

A somewhat more amped-up version of nightmares, night terrors involve all the screaming and violent body movement you'd experience from a bad dream, but with little, if any, recollection of what went on while you were dreaming. Symptoms range from aggression just after waking to heavy breathing and the urge to run.

REM sleep behavior disorder compels sufferers to act out some of the most profane, violent portions of their dreams. The disorder is categorized by its negative qualities, and symptoms include shouting curse words as well as punching and kicking. Oh, and the ability to remember everything that happened in the dream, even if you weren't aware of your actions.

A rare version of sleep walking, the colloquially known sexsomnia involves aggressive groping of the sufferer's partner. A 2008 special on the UK's ITV detailed the case of sexsomniac Tim and his partner Amanda, who felt as if her "skin is being ripped away from her body" when Tim entered his forceful, unconscious state. Even worse, Tim was consistently unable to recall the evening's episode the next day.

Yes, that's a tooth severely impacted by bruxism, or teeth-grinding, which is typically brought on by stress, and can be so loud that it can awaken your partner. Bruxism can not only damage teeth, but also hurt the jaw, making it difficult to eat or open your mouth at all.

Much is still being researched and discovered about Nocturnal Paroxysmal Dystonia, though doctors believe that the seizure-like episodes that sufferers experience are closely linked to epilepsy. The rapid body movement of NPD typically occurs multiple times a night and can be incredibly physically dangerous.

Also known as Willis-Ekbom disease, Restless leg syndrome involves all appendages; not just the legs. Symptoms can range from mildly unpleasant sensations to painful cramping and burning, to the point that limbs twitch from the feeling. The fact that symptoms typically occur at night just as you're relaxing is even worse.

One of the worst things about sleepwalking is that it can occur in tandem with night terrors, making for a truly harrowing experience that you may not remember but those around you will. Sleepwalking symptoms can range from being asleep and doing routine activities and talking to putting yourself in physical danger. It's rare that sufferers are injured when they sleep walk but possible nonetheless.

Nightmares are always scary, no matter what age you are when you experience them. Unlike many of the other sleep disorders on this list, those who suffer from nightmares tend to remember their dreams more than someone suffering from night terrors. Anxiety and stress typically bring about terrible dreams, which occur more frequently in children than in adults.

More like this
These 25 International Horror Movies On Netflix Prove Fear Is A Universal Language
By Bustle Editors
‘Squid Game’ Creator Hwang Dong-Hyuk Just Dropped A Major Season 2 Tease
By Brian Anthony Hernandez and Bustle Editors
Here's How Cardio & HIIT Affect Your Body Differently
By Carolyn Steber
15 Talc-Free Makeup Brands For Safer Eyeshadows, Powders, & More
By Audrey Noble
Get Even More From Bustle — Sign Up For The Newsletter